Romeo and Juliet Deaths: Who is Responsible?

Don't use plagiarized sources. Get your custom essay on
“ Romeo and Juliet Deaths: Who is Responsible? ”
Get custom paper
NEW! smart matching with writer

It is easily seen that Romeo and Juliet aren’t the only ones that have the blame for their deaths The Capulet and Montague families played a major part in the demise of Romeo and Juliet. This is also made clear through the characterization of Friar Lawrence how influences the playwright by developing a love story that was destined to end brutally. Shakespeare positions his Elizabethan audience to condemn the theme of death through Para#3.

Shakespeare prompts his Elizabethan audience to consider that love shouldn’t be taken for granted.

The Capulet and Montague families played a major part in the demise of Romeo and Juliet. Romeo and Juliet aren’t entirely responsible for their demise their family’s never-ending battle was the core reason they could not be together in the first place. This can be seen when Sampson asks Abraham if he wants to fight “Do you quarrel, sir? Quarrel sir? No, sir.” Shakespeare included this quote to illustrate how strained the situation was between the two families.

The audience would perhaps believe Sampson is ruthless and doesn’t care for anyone else than his master’s family. The quote reveals that there is no reason for the two families to be enemies. Tybalt also displays ruthlessness when saying “peace, I hate the word, as I hate hell, all Montagues and thee” Shakespeare included this line to show that people can be immature and ignorant to the extent of affecting someone’s death. Tybalt is one if of the most aggressive characters in the whole play if not the most. The audience again may think that he is ruthless and only cares for his family. Juliet also expresses how impossible life would be with Romeo because of their two families through the quote “My only love sprung from my only hate!” Shakespeare included this quote to clarify how much your family affects your own love and decision making. This displays really how difficult it will be for this love story to not end horribly. The audience would possibly think that Juliet is responsible and takes the situation seriously despite her young age. Finally, at the end of the play, the Prince ends the feud between the Montagues and the Capulets through the line “Capulet, Montague! See what scourge is laid upon your hate… All are punished.” Shakespeare included this quote because war is organized murder, and nothing else. The audience would perhaps believe that Prince Escalus is the reason the two families are now at peace. The quote reveals that conflict isn’t necessary and only brings ruthless behavior and premature actions. Upbringing in families at constant war affects their offspring’s ability to make responsible choices. Shakespeare makes the point that life isn’t perfect and if a thing is too good to be true it often is. Romeo and Juliet aren’t entirely responsible for their death their houses conflict affected their demise severely.

William Shakespeare’s play Romeo and Juliet is a catastrophic playwright where Romeo and Juliet die a horrible death. The eponymous character isn’t entirely responsible for their demise but could have done something to stop it from happening. These emotionally loaded themes were important to the Elizabethan audience as queen Elizabeth wanted to establish peace in Europe through The Capulet and Montague families played a major part in the demise of Romeo and Juliet, the characterization of Friar Lawrence influences and Para#3 the playwright by making a love story that was destined to end tragically. The moral is expressed in the play’s denouement when the prince states “See what scourge is laid upon your hate, That heaven finds means to kill your joys with love. And I for winking at your discords too Have lost a brace of kinsmen: all are punished.” As a result, the Elizabethan audience is aware of not letting your emotions rule and not taking hasty decisions. Overall, William Shakespeare‘s Romeo and Juliet is a tragic ending isn’t all Romeo and Juliet’s doing. “For never was a story of more woe than this and her Romeo”.

Romeo and Juliet Deaths: Who is Responsible?. (2020, Sep 04). Retrieved from https://studymoose.com/romeo-and-juliet-deaths-who-is-responsible-essay 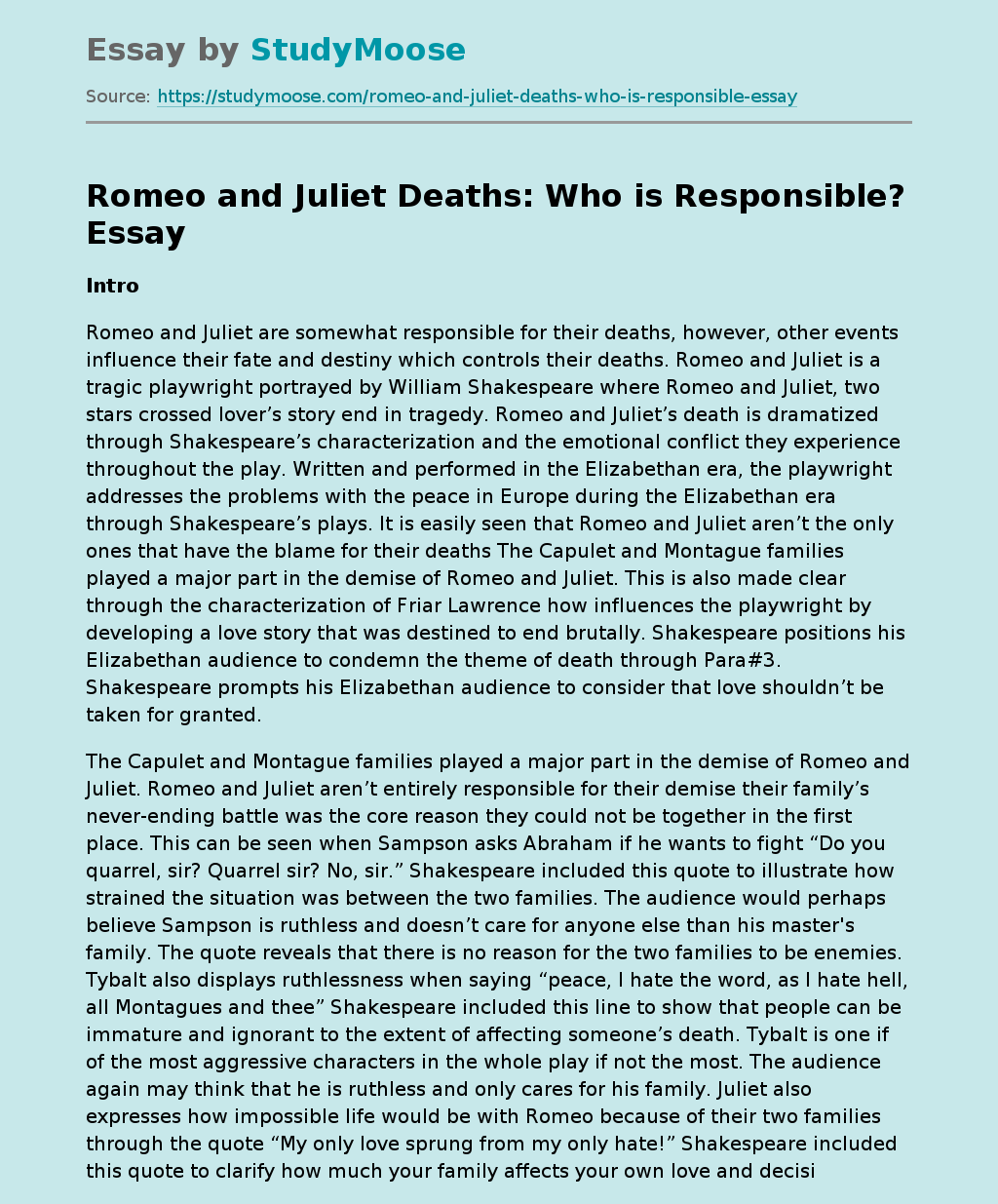