Roles of Women in Post-Classical Periods

In North Africa, women were actually deemed high in their society. They were considered the source of life and were often held in higher regard than men.

Don't use plagiarized sources. Get your custom essay on
“ Roles of Women in Post-Classical Periods ”
Get custom paper
NEW! smart matching with writer

They planted and harvested crops while the men performed the heavy labor and cleared the land. Women tended to the children and were responsible for domestic house chores. Many women even took part in trade and market, becoming merchants in long-distance trading. Surprisingly, women in post-classical North Africa even created their own military units.

The coming of Islam did not change the roles of women in North Africa much. Besides the fact that some women were required to wear a veil and lead secluded lives, most freely talked with men and worked alongside them in society.

However, it was another story in Southwest Asia. Before post-classical Southwest Asia, women were treated as property. They were considered inferior being and were not allowed to hold governmental or social positions. They were not given much freedom, considering their only purpose in life was to bear children and manage the household. Even more shockingly, if a man and woman committed the same crime, the man could get away unharmed, but the punishment for women may be as harsh as death!

Later on, after the beginning of post-classical Southwest Asia, women were given more freedom and had more strength and influence in their societies.

They were treated more equally with the coming of Islam. Although most of post-classical Asia took some time to catch up, eventually women were treated as equally as men.

These two civilizations did not share many similarities at all. In fact, the only real thing they had in common was the conquest of Islam and its effect
on them. Besides the fact that Islam brought them a little more freedom, these two civilizations share nothing in their treatment of women.

Equal rights is a big issue in the world. Women have been fighting for them for years, even as far back as post-classical time periods. North Africa and Southwest Asia, examples of some eras, are found different in their treatment of women. They had their differences and they had their similarities. But eventually, it lead up to women having the same rights as men.

Roles of Women in Post-Classical Periods. (2016, Mar 24). Retrieved from https://studymoose.com/roles-of-women-in-post-classical-periods-essay 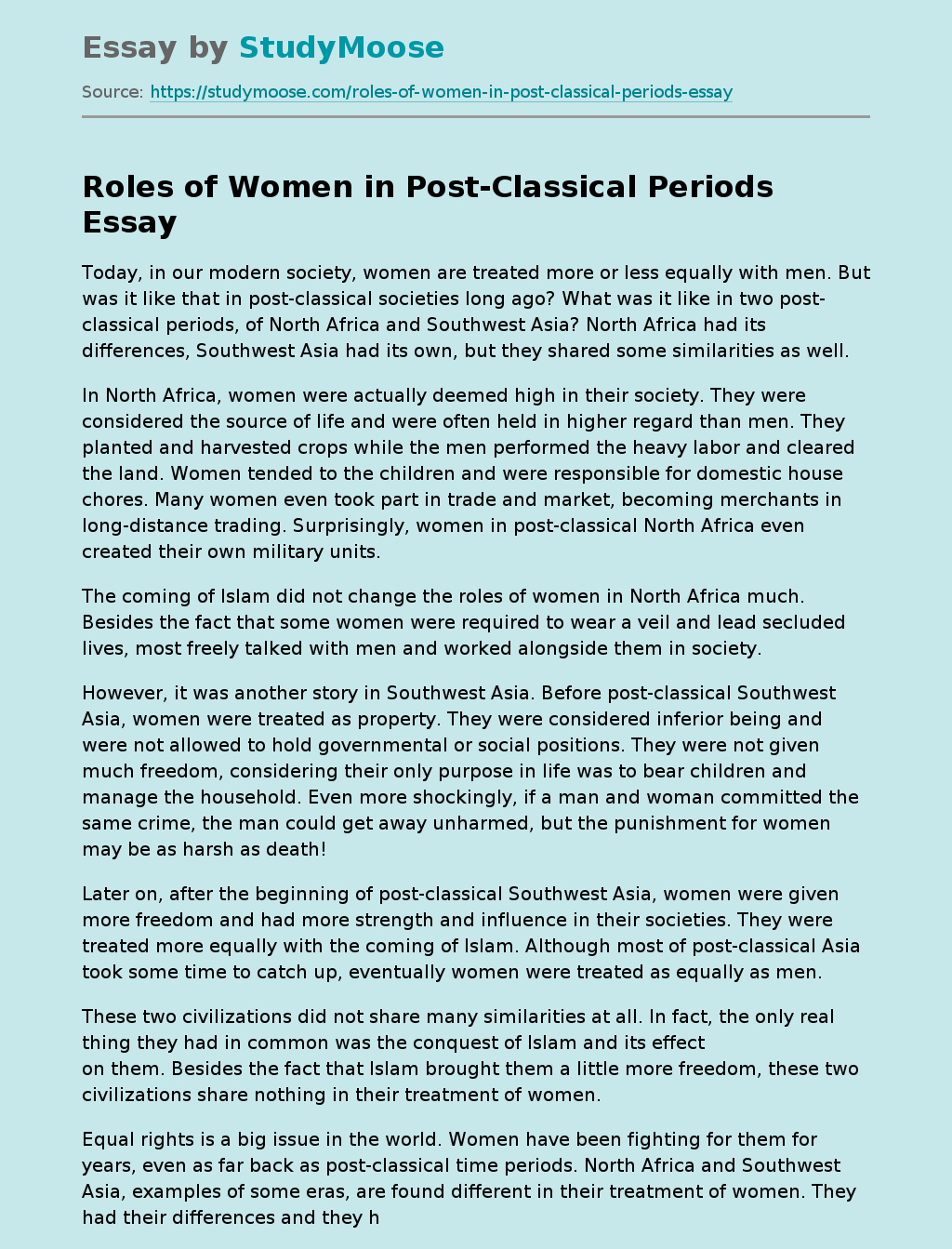