Role of Youth in Enriching and Conserving Your Cultural Heritage

A safe and secure society is needed for blossoming of arts and sciences. India has a rich cultural heritage. Though it has been subjected to a series of cultural invasions, yet it has retained its originality and traditional character even after absorbing the best of the external influences. India is the cradle of one of the earliest civilizations of the world – the Indus Valley Civilization.

India is rich in spiritual aspect and we should not fall prey to the ill-effects of western culture.

For thinking minds to blossom for arts and sciences to develop, a primary condition is a safe and secure society. A rich culture is impossible in a community of nomads’ where people struggle for life. India has got all the gifts of nature.

Nature yielded enough food and man did not have to toil very hard for meeting the basic needs. Before we proceed further, let us understand what culture is. Culture is the accumulated’ store of symbols, ideas and material products associated with a social system.

In India great civilizations and cultures have flourished from times immemorial. Contemporary India pulsates’ with the echoes of the past and gives them new shape and form every day. The diversity of India is tremendous in Cultural Heritage. Cultural heritage stands for things

It is a land of many languages. It is home to many ethnic’ groups. But there are certain common links which act as threads and prove unity among diversity. India does not have one but many great traditions.

Cultural heritage stands for things that have been passed on from earlier generations to the present generation. Of special significance are the works of literature, music and arts in all its forms and shades. India has a rich cultural heritage. It is a healthy blend of various Cultural Heritage.

In the initial phases of our civilization, we remained aloof but for the last three thousand Cultural Heritageyears till the recent past, the country had to face many invasions. Some of the invaders made India their home and with the passage of time, their cultures fused into the original culture. India can rightly boast of being one of the oldest civilizations of the world.

The Indus Valley Civilization is among the oldest, being about 6,000 years old and the best civilizations of the world. People were fairly advanced and had access to public baths, neat and clean houses, good towns with wide roads and best facilities. They even had a script which closely resembles the Dravidian languages.

The Vedas are the earliest documents of the human mind that we posses. The Vedas give us abundant information. There are four Vedas: Rig, Yajur, Sama and Atharva. In them we find freshness, simplicity and charm and an effort to understand the mystery of the world.

The Indian paintings and sculpture have left deep impact on different civilizations. Rock caves in Hoshangabad, Mirzapur and Bhimbetka are witness to the paintings of primitive men. The paintings of the Ajanta cave are a rare piece of work. Many painters emerged during the colonial rule. Amrita Shergill, Jamini Roy and Rabindranath Tagore were the pioneers’ of modern painting.

The Ashokan pillar, the Sanchi stupa, the temples at Konark, Khajuraho and Mahabalipuram are unique works of Indian sculpture. Jama Masjid, Red Fort, Taj Mahal, Humayun’s Tomb show a blend of Indian and Mughal architecture. All these marvels were created during the Mughal period of Indian History, Astrology and Astronomy were quite popular in ancient India. Aryabhatta precisely calculated the time of solar eclipse more than two thousand years ago.

The concept of ‘Zero’ was invented in India. Indian scientists like C.V. Raman, Subramanian Chandrasekhar, Hargobind Khorana and Venkataraman Ramakrishnan have won Nobel prizes for their contribution to science. Music is one of the oldest forms of expression of human thought and emotions. Indian music is based on the concept of ragas and talas.

There are two major schools of classical music – the Carnatic and the Hindustani. Indian musicians like Bhimsen Joshi, M.S. Subhalakshmi, Kishori Amonkar, Pt. ‘Jasraj, Ustad Amjad Ali Khan, Ustad Bismillah Khan, Ustad Zakir Hussain, Pt. Ravi Shankar and others have popularized our music in India and abroad. Dance in India has an unbroken tradition of over 2,000 years.

Its themes are derived from mythology, legends and classical literature. There are two Cultural Heritagemain forms of dances in India. These are folk dance and classical dance. They are not simply the movement of legs and arms, but of the whole body. Most of the classical dances were first conceived’ and nurtured’ in the temples. They attained their full stature there. Classical dance forms are based on ancient dance discipline.

Most of the Indian classical dance styles are depicted on the walls and pillars of the famous Indian temples. Music, dance and drama have been an integral part of Indian religious and secular life. Some well-known classical dancers are: Sanjukta Panigrahi, Sonal Man Singh, Birju Maharaj. Gopi Krishnan, Guru Bipin Sinha, Javeri Sisters, Kelucharan Mahapatra, etc. India has a rich literary heritage.

India also has a rich regional literature. Regional literature in fact, has often contributed to the Fostering of a national identity and a national culture. India has always been a linguistically diverse community. Even in the ancient times there was no language which was spoken by everybody.

Sanskrit was only the language of the elite whereas Prakrit and Ardha Magadhi were more commonly spoken by the masses. During the Mughal rule Persian took place of Sanskrit as the court language while Urdu and Hindustani were the languages of the common masses in North India. However the Dravidian languages continued to flourish in the south.

On the whole from the ancient texts in Sanskrit to Bengali literature which pioneered the 19th century Indian renaissance, to modern day regional literature, what is reflected is an attempt to break the narrow walls of provincialism and build bridges of integration and peace between the various cultures of India.

Kalidasa’s Abhijanan Shakuntalam and Meghdutam, Vishakhadatta’s Mrichhakatikam, and Jaideva’s Geet Govindam are rated very highly for their literary excellence. The period from mid-14th century to mid-17th century, was dominated by the Bhakti Kavyas or devotional poetry. Kabir, Surdas and Tulsidas were famous poets of this era. The modem period of Hindi was ushered in by Bhartendu Harishchandra. Maithili Sharan Gupt, Jayashankar Prasad, Sumitra Nandan Pant, Surya Kant Tripathi ‘Nirala’, Munshi Premchand and Mahadevi Verma have made major contributions to modem Hindi Literature.

Cultural HeritageIndia has produced a number of literary marvels in English as well. Rabindra Nath Tagore won Nobel prize for his collection of popular poems ‘Geetanjali’. It is without doubt that India has a rich cultural heritage and that we have excelled in different spheres. However, it should also be acknowledged that we have inherited some negative aspects of our culture. Division of society on the basis of division of labour gave birth to the caste system.

The caste system created a gulf among people leading to disunity and conflicts in the society. Child marriage, sati, untouchability, female infanticide and many other social evils were born in the Indian society. The widows in many parts of our country still lead a miserable life. The philosophical thoughts of Raja Ram Mohan Roy, Dayanand Saraswati, Rama Krishna Paramahansa, Swami Vivekananda, Tagore, Gandhi and Nehru have contributed a lot to the enrichment of the Indian culture. Culture is dynamic; cross currents of other cultures always influence the culture of a country.

It is more so in the present day world, where distances virtually have ceased to exist. Let us keep our windows and doors open to other cultures and their healthy influence, but we should stand firm and tall and should not be swept off our feet.

Role of Youth in Enriching and Conserving Your Cultural Heritage. (2016, Nov 15). Retrieved from https://studymoose.com/role-of-youth-in-enriching-and-conserving-your-cultural-heritage-essay 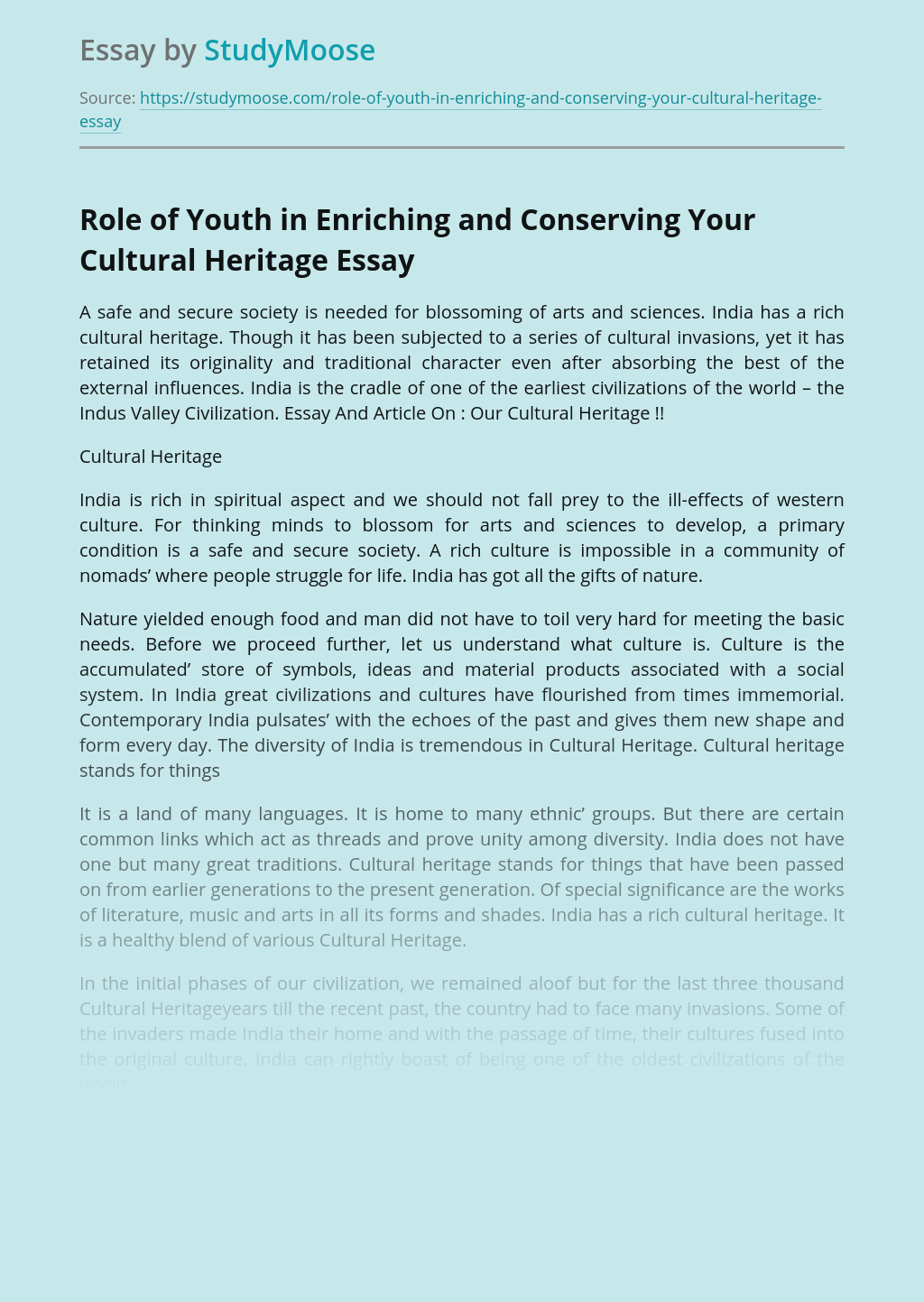 India is a big country comprising many racial groups with a great number of spoken languages and dialects. There are several religions and sects. These are reflected in their customs, rituals, dresses and festivals. Indian is the cradle of many cultures. In spite of the diversities, the people are united. Though several foreign invaders attacked...

Hawa Mahal stands upright as the entrance to the City Palace, Jaipur. An important landmark in the city, Hawa Mahal is an epitome of the Rajputana architecture. The splendid five-storey “Palace of the Winds” is a blend of beauty and splendor much close to Rajasthan’s culture. Maharaja Sawai Pratap Singh built Hawa Mahal in 1779....

Get Essay
The Mughal Dynasty

The Mughal Empire was the dominant power in the Indian subcontinent between the mid-16th century and the early 18th century. Founded in 1526, it formally endured up until 1858, when it was supplanted by the British Raj. The dynasty is sometimes described as the Timurid dynasty as Babur was descended from Timur. [citation needed] The...

About India: History and Culture

The history of India begins with evidence of human activity of Homo sapiens as long as 75,000 years ago, or with earlier hominids including Homo erectusfrom about 500,000 years ago. The Indus Valley Civilisation, which spread and flourished in the northwestern part of the Indian subcontinent from c. 3300 to 1300 BCE in present-day Pakistan...

Over time the Mongolian army has become synonymous with the term barbarian. The definition of barbaric is unsophisticated, primitive, and savagely cruel. These terms do not give the Mongols enough credit. I believe that they were not completely barbaric though they did have some brutal techniques. They were advanced strategists for their time period. The...

The Rise Of The Mughal Empire

Introduction             No period in the Indian history has enjoyed as much attention and scholarly research efforts as the period in history that corresponds with the Mughal rule. The Mughal Empire is known as one of the largest centralized states recorded in pre-modern history1. At its zenith, the Mughal Empire commanded resources unprecedented in Indian...

To start this topic, the first question that arises in the mind is that what is art? Basically art is not a word, which has a specific definition, but in literal meanings art can be defined as a spiritual sense of a human being, which he or she notes down in an artistic way. Art...