Role of Women in China, Japan, and the Mongol Empire

In the Postclassical Era, the overall role of women and the roles they played in society began to change. The three major civilizations of China, Japan and the Mongol Empire were no exceptions. The everyday rights of women varied among these societies. The relationships between women and their husbands differed among the civilizations as well. Finally, specific women in each society held positions unique to their own cultures. During the postclassical period, women in China, Japan, and the Mongol Empire played different roles in their respective societies, with the main subjects of comparison being their everyday rights, their relationships with their husbands, and the positions specific individuals held.

Don't use plagiarized sources. Get your custom essay on
“ Role of Women in China, Japan, and the Mongol Empire ”
Get custom paper
NEW! smart matching with writer

In China during the Tang-Song era, the everyday rights of the vast majority of women were reduced. Neo-Confucian scholars supported male dominance and the idea that women should be treated similarly to property, an idea shown through the practice of foot-binding. Women whose feet were bound were greatly limited in mobility and could not travel far from the family compound.

In Japan, some women in the Heian court enjoyed many rights, although they remained subordinate to men. They often wrote poems, played the flute or stringed instruments in informal concerts, and participated in elaborate schemes to snub or disgrace rivals.

Some other women participated in guild organizations and were allowed to pass their positions on to their daughters. In the Mongol Empire, women retained many individual rights that women in other societies–particularly China–did not. Mongol women refused to adopt the practice of foot-binding, which so limited the activities of the Chinese women who were subjected to it.

They held rights to property and control within the household. They had the freedom to move about the town and countryside, a right which some Mongol women exercised in order to hunt and go to war.

In Tang-Song China, the law allowed women to divorce their husbands if mutual consent had been reached. Additionally, husbands could not disband their wives if her parents were dead or if he had been poor before the marriage and had become rich during it. In some instances, women possessed lovers known as “complimentary husbands” with the knowledge of their true husbands. In Japan, women were given from their own families to the family of the husband in order to cement alliances between warrior households. They were trained to anticipate their husbands’ every desire and taught to slay themselves rather than be raped by illicit suitors or enemy soldiers. Such a practice was put into place so that women would not dishonor their family lines.

In the Mongol Empire, Chabi, Kubilai Khan’s wife, convinced Kubilai that the harsh treatment of the survivors of the defeated Song imperial family would only anger the peoples of North China and make them more difficult to rule. On another occasion, she demonstrated her respect for the Chinese by frustrating a plan to turn cultivated lands near the capital into pasturelands for the Mongols’ ponies. In China under the Tang-Song, upper class women who lived in urban areas, one of whom was the royal concubine Yang Guifei, could yield considerable influence at the highest levels of Chinese society. She used her power to pack the upper levels of the government with her greedy relatives. They and Yang worked together to assume an even greater role in court politics.

During the postclassical period, the role of women in these three civilizations changed in many ways. Some roles changed dramatically and others moderately. The overall status of women increased, but nevertheless, the female gender as a whole remained subordinate to men.

Role of Women in China, Japan, and the Mongol Empire. (2016, Jul 04). Retrieved from https://studymoose.com/role-of-women-in-china-japan-and-the-mongol-empire-essay 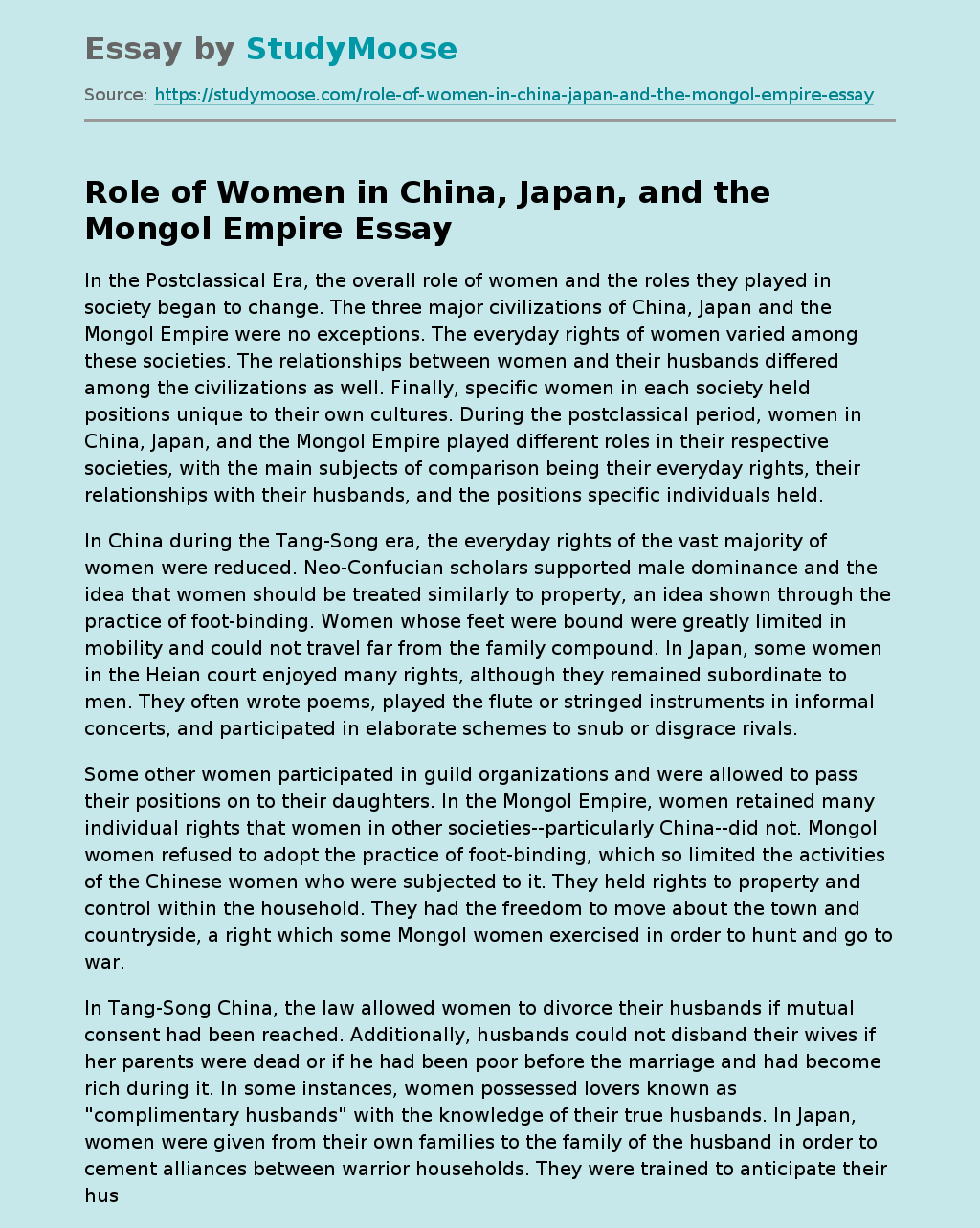