Role of the Witches in Macbeth

Macbeth is a play about morals and how people can be easily influenced. The audience at the time when the play was written were more superstitious than we are. They believed in witches and thought that they were the devils disciples. They were believed to be able to control the weather, blamed many things, such as outbreaks of disease on them. The first people to meet the Witches are Banquo and Macbeth. They find the witches appearance is vile. We can see this as Banquo says that “(they) look not like the inhabitants of the earth.

Don't use plagiarized sources. Get your custom essay on
“ Role of the Witches in Macbeth ”
Get custom paper
NEW! smart matching with writer

” This shows us that the witches are obviously strange, and probably misshapen in their appearance. Banquo also says that “(they) should be women, and yet (their) beards forbid me to interpret, that (they) are so.”

In all their scenes in the play they do extremely evil things. The fact that there are three of them also promotes them as the devils trinity. In their first scene, and the very first scene of the play, their penultimate line is “fair is foul and foul is fair,” a paradox that suggests that the whole moral order of the world has been turned on its head. Then in their next scene, before Macbeth and Banquo arrive, they tell each other of the evil that they each have committed while they have been away.

One witch, for instance, has been killing livestock “Killing Swine”; while another has wrecked the ship of a man whose wife didn’t give him any chestnuts from her bowl (act 1, sc. 3, lines 3-25). In the potion in the final scene with the witches, they use many ingredients which would, at Shakespeare’s time, been considered evil and many would still be regarded in the same way today. These include “poisoned entrails,” “eye of newt,” “lizards leg,” and “tooth of wolf.” They also destroy buildings which would be perceived as belonging to God, such as castles and churches (Act 4 Sc. 1 Lines 51-2)

The witches are very powerful. We can see all through their scenes that they seem able to have a telepathic link as they can literally take the words out of each other’s mouths. We can see this in their first scene when they say “Where the place?” “Upon the heath” “There to meet with Macbeth.” At the end of this scene they say, “Hover through the fog,” showing us that they can hover. They can also control the winds “I’ll give thee a wind” and use this power to do evil things like cause shipwrecks. The Witches can travel at high-speeds “Posters (high-speed travellers) of land and sea.” They also curse people to hell “He shall live a man forbid (cursed).” They can see in to the future, which is the crux of Act 1 Sc. 1 and Act 4 Sc. 1. They have the capacity to summon up apparitions. They can topple down buildings “Though castles topple.” And they can vanish. We see this when they leave Banquo and Macbeth on the heath and the stage direction says “Witches vanish.”

The witches would probably have filled every Elizabethan stereotype of witches. Banquo describes them as “withered” and “wild” and this would have met the Elizabethan expectation of the emaciated old hag casting spells and cursing. Their acts are also stereotypical witch, like the making of the potion in Act 4 Sc. 1. And the cursing of the man in Act 1 Sc. 3. The reference Macbeth makes to them blowing down churches (see above for reference) is also stereotypical witch act as they were thought to blow down these holy places in their work for the Devil.

The witches undoubtedly hold influence on the play. But how much influence do they really hold on the events in the play and how much do the characters bring the events upon themselves? The witches were not really responsible for any of the events in ‘Macbeth.’ However, they do plant the first seed in the mind of the characters to lead the events on. The first time we see this is with the murder of Duncan. The witches give Macbeth the idea of becoming king, but he thinks of murder “whose murder yet is but fantastical.” Macbeth says this aside in Act 1 Sc.3. the witches never say anything to Macbeth about murder; it is entirely his own idea.

The murder of Banquo is another example. The witches prophecies to Macbeth and Banquo plant the seed of thought in Macbeth’s mind “Thou shalt get (father) kings.” When Macbeth becomes king, he sees this as a threat to his kingship and attempts to murder Banquo’s son, Fleance. Although this fails, Banquo is killed. Macbeth is greatly influenced by the witches at their second meeting, and takes everything that they say literally. Their first warning to Macbeth is that he should be wary of Macduff “beware Macduff.” In response to this, Macbeth ruthlessly murders Macduff’s family.

The warning is the seed, but Macbeth thinks the rest for himself. The second warning tells Macbeth that he can be harmed by any man “of woman born.” Macbeth takes this literally and says before the battle “What’s the boy Malcolm? Was he not of woman born?” However, we learn later a few scenes later that Macbeth has taken this too literally and that it means natural. We also learn that Macduff was not naturally born and so can harm Macbeth.

So what really is the role of the witches in Macbeth? I think that their role is to give Macbeth a thought that they know he will try and expand on. The perfect example is foretelling his ascension to the throne. They tell him he will become king but they don’t tell him how. He just assumes he has to murder Duncan to become king. The witches are also there to help the play move along naturally. They are there to guide Macbeth along his path in the play. The Witches have quite a strong influence over Macbeth and so use this to guide him down his path.

Role of the Witches in Macbeth. (2016, Mar 26). Retrieved from https://studymoose.com/role-of-the-witches-in-macbeth-essay 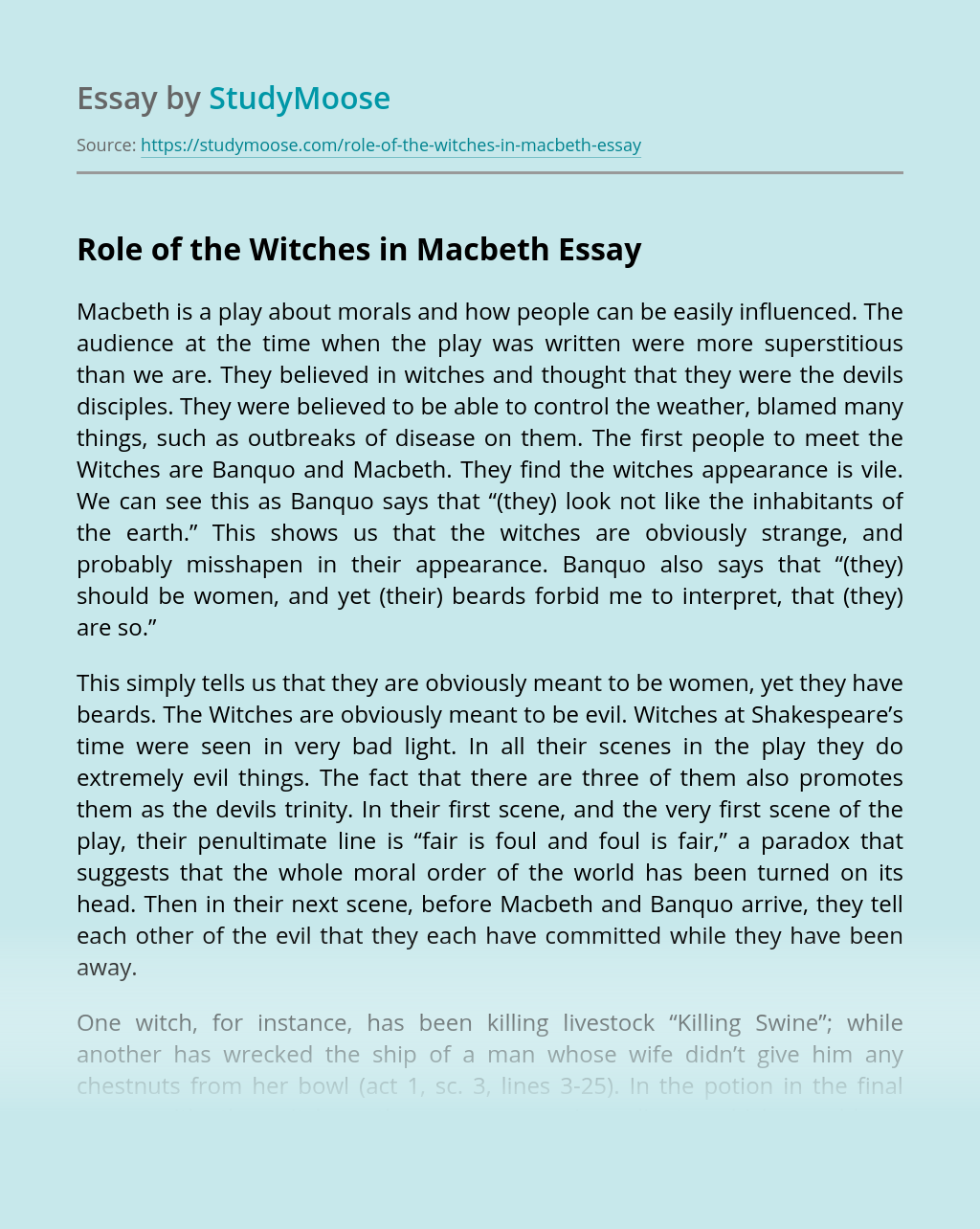