Role of media in present society

There are many different ways in which people communicate such as, through the phone, through personal encounters, and by attending work place, school, seminars etc. Though media is not the only communication medium used to dispense the flow of information, its importance in developed countries is worth mentioning as it has been the main source to inform people on political issues or current affairs as well as being as the main source of entertainment. The flow of information from one geographical location to another has increased in speed considerably with the advent in digitally enabled communication devices.

Turn in your highest-quality paper
Get a qualified writer to help you with
“ Role of media in present society ”
Get high-quality paper
NEW! AI matching with writer

Different network channels over cable or satellite TV, newspapers and radio channels are emerging at a very rapid pace providing the people with a medium to connect themselves with the outside world. Print media has always been a dominant medium throughout the decades in the western civilization, but it is the emergence of the television which has become the backbone ofIs this Essay helpful? Join OPPapers to read more and access more than 200,000 just like it!

Television contains the ability to produce multimedia content and thus has the immense power to change an individual’s perception of reality. It is of no wonder that in order to believe in something, one has to have complete faith in the source of information. This source of information could be ranging from one person to any academic institution

It can change opinions because they have access to people and this gives it a lot of strength.

This strength can either be used constructively by educating the people or it can be used destructively by misleading the innocent people. Power of the media can transform the whole society especially in the developing countries it can be used as a ‘weapon of mass destruction’. But I think the most important use of media is to educate the people about the basic human rights. The dilemma of the developing countries is that people are not fully aware of their basic rights and if they know, they don’t know about what to do and where to go. They don’t know their collective strength. Even they don’t know how to protest and what is the importance of protests.

Media should portray the facts. They should not transform the reality.Education and discipline is key to progress. This is the difference between a nation and a crowd. Media men have access to people and they have an audience. Their programs have an impact and people listen to them.That’s why they are more responsible for the betterment of the society. They should work to educate the people, to help the people and to liberate the people and to empower the people.Media plays a very important role in the building of a society. Media has changed the societies of world so much that we can’t ignore its importance. First of all we should know what the media is.

Media is a source of information or communication. Media includes sources like print media and electronic media. Newspapers, magazines and any other form, which is written or printed, is included in print media and in electronic, media radio, television and Internet etc. are included. When there are so many channels and newspapers we cannot ignore its importance in the society. Media has lot of responsibility on its shoulders as today’s society is very much influenced by the role of media.

Role of media in present society. (2016, May 08). Retrieved from https://studymoose.com/role-of-media-in-present-society-essay 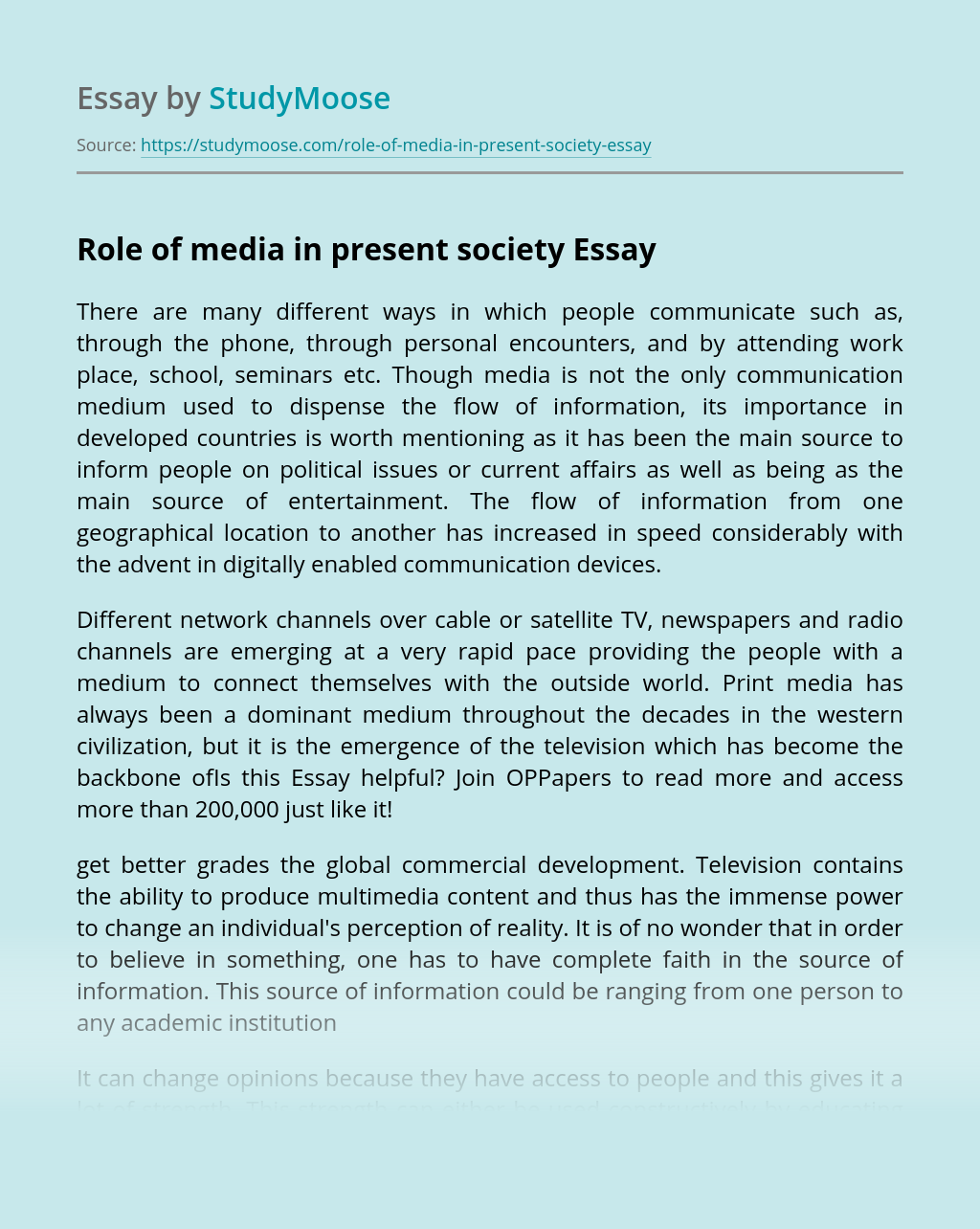 Turn in your highest-quality paper
Get a qualified writer to help you with
“ Role of media in present society ”
Get high-quality paper
Helping students since 2015
Stay Safe, Stay Original