Role of Ethics in Advertising

Ethics can be defined as the moral principles that govern a person’s or group’s behavior. Code of Ethics
A code of ethics is used by companies, professional organizations and individuals. It contains some rules and principles which help them in making decision between right and wrong. For example, codes for individuals are * Respect for another’s property

* Refraining from violence against another
* Treating others with civility
Advertising
Advertising attract us in a lot of ways. It is a form of non-personal and paid form of communication for goods, services and ideas by the identified sponsor.

Don't use plagiarized sources. Get your custom essay on
“ Role of Ethics in Advertising ”
Get custom paper
NEW! smart matching with writer

It is always strategic in character. Ethics in Advertising

The Second National Council declared
“If the media are to be correctly employed, it is essential that all who use them know the principles of the moral order and apply them faithfully in this domain” Ethics are very important in advertising. Ethics can be defined as “A set of well defined principles which govern the ways of communication taking place between the seller and the buyer” Now a day’s advertisers are unaware of the importance of ethics in advertising.

They do not know the ethical rules and principles and that’s why they are unable to decide between right and wrong. What is an Ethical Ad?

“An ethical ad is the one which does not lie, does not make any fake or false claims and is in the limit of decency” Now a day’s advertisers only focus on their sales, they just want to attract customers and increase their sales.

They present their ad in a way that people starts thinking that this is the best product as compared to others. They present their product in an ad very beautifully but most of them are found to be fake, false, misleading customers and unethical. What is Unethical Advertising?

Advertising is Unethical
* When it has degraded or underestimated the substitute or rival product
* When it gives false or misleading information
* When it fails to give useful information about the possible reaction or side effects of the products. * When it is immoral
* When it contains some offensive material.
Ways of Unethical Advertising
* Surrogate Advertisement
It is a form of advertising which is used to promote banned products like cigarettes and alcohol in the disguise of another product. For example, products like alcohol and cigarettes are banned in many countries but these countries still promote their product through different ways. They come up with several products which remind people of the banned products. For example, Kingfisher brand, they promote their brand through surrogate advertising.

* Puffery
Puffery means false praise. It is a language which is used in promotion of different products to make the products more appealing and attractive. Advertisers make false claims in puffery to persuade people which are difficult to prove. The better, best, finest, great and greatest kinds of words are used in puffery. For example, a coffee shop claims that their coffee is the best coffee in the city or a beauty cream manufacturer proclaims that their cream will remove the wrinkles from face in few weeks. These are the examples of puffery.

According to an article there should be three moral principles in an ad * Truthfulness
* Social Responsibility
* Upholding Human Dignity
An infamous Volvo commercial presents a car which remain uncrushed after a monster truck runs over it. This ad was completely wrong because there is no car in this world which remains uncrushed after a heavy truck runs over it. Similarly, in pharmaceutical advertising the advertisers tell us that what the medicine can cure but they never tell us the side effects of the medicine. The advertisers should show truth which is one of the main principles of ethics

Similarly advertisers should also avoid false and misleading statements, inaccurate testimonials because they portray a fictional person, insufficient claims which cannot be proved, and offensive material should also be avoided. So it is necessary for all the advertisers to follow the ethical rules and principles and try to avoid the unethical things in their advertisements. References

Role of Ethics in Advertising. (2016, Mar 23). Retrieved from https://studymoose.com/role-of-ethics-in-advertising-essay 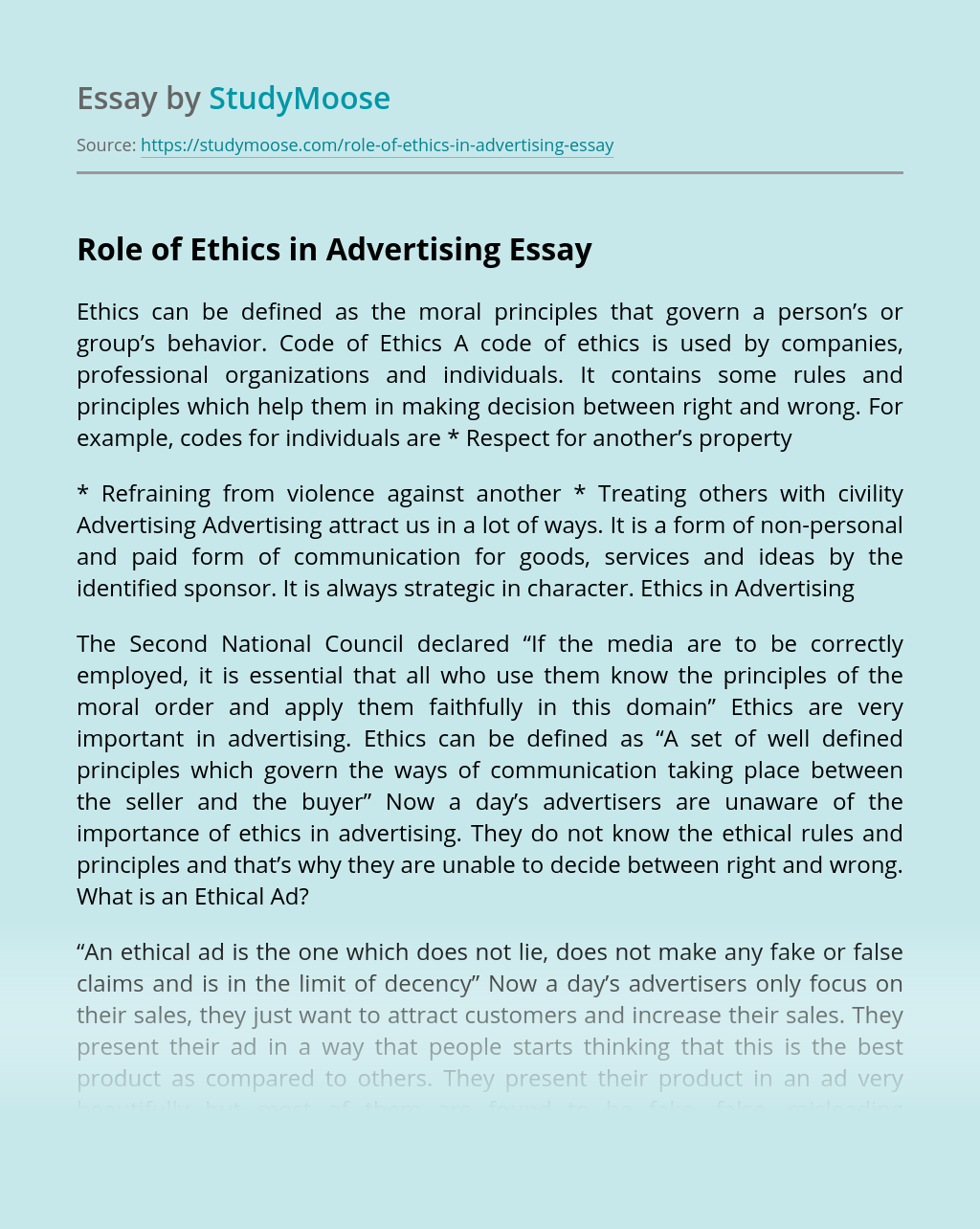