Dorothy L. Sayers states “Wherever you find a great man, you will find a great mother or a great wife standing behind him.” Man is a societal construct that is structured and molded by maternal influences and female insight. Typically one is a product of its environment, however Robertson Davies in “Fifth Business,” deliberately uses female roles to display the impact that women have on the psychological growth of a man. Davies chronologically traces the psyche of Dunstan Ramsay as he matures with the guidance of significant female characters in his life.

In “Fifth Business,” Robertson Davies uses the characterization of Mrs. Ramsay, Diana Marfleet, and Mary Dempster, to emphasize the influence women have in the maturation of man. The first major influence on Dunny’s life is his mother, Mrs. Ramsay. She is the first maternal influence on Dunny and forms him into a person that takes control of his own life. Mrs. Ramsay is characterized as a determined, strict and controlling person with a “lionlike spirit.

” (Davies 16). Her parental role in guiding and loving her son, however, drastically changes as the focus of her love is altered in the introduction of Paul Dempster. This is evident, when Dunny states “I began to believe that I was more responsible for the birth of Paul Dempster than were his parents, […]. Part of that dreadful fate would undoubtedly be rejection by my mother” (Davies 17).

Unquestionably, Mrs. Ramsay’s love and affection begins to be directed towards the Dempster’s family instead of her own household.

Dunny’s lack of motherly affection leaves him with a sense of alienation as he “yearned for (his) mother’s love”(Davies 31). The lack of motherhood initiates Dunny’s feeling of isolation, and forces Dunny to mature faster. Consequently Dunny begins to feel resentment towards his mother who is unable to provide the necessary attention and love an adolescent boy needs. The maltreatment cast upon Dunny by his mother is responsible for his deep isolation, his self-controlling mentality, and his stance on women. Secondly, Diana Marfleet plays a significant role in the novel as Dunny’s first meaningful and realistic love, and a second maternal female in Dunny’s life. Diana nursed Dunny back to life, after he was nearly left to die in the war. Diana is characterized as Dunny’s second mother, as she brings him back to life, re-teaches him the essentials of life, and renames him, Dunstan. Diana catalyzes Dunstan’s maturing process, as she initiated him into the world of manhood, sexually, and mentally as he began to form his own decisions. Moreover, to complete his transformation she decides that he should change his name to Dunstan, which mentally gives him the psychological ambition to complete and realize his transformation into a new person in stating “I liked the idea of a new name; it suggested new freedom and new personality” (Davies 90).

Distinctly, being with Diana has made him think about himself for once in life and made him realize that he loves her unconditionally, however, Dunstan states “she was too much of a mother to me.” (Davies 81). This motherly attraction to Diana drives Dunstan away from her, as he knows that their relationship could not have lasted. Finally, throughout the novel, Mary Dempster has an impactful role in the growth of Dunstan Ramsay. Mary teaches Dunny to disregard the moral rules of society, and to behave in a manner that is unselfish and for the betterment of others. Dunny admires Mary Dempster’s unorthodox actions, as “the stranger her conduct became, and the more the village pitied and dismissed her, the worse my (Dunny’s) obsession grew.”(Davies 24). Dunny sees past the judgements of society, and perceives Mary as a saint. In the eyes of Dunny, Mary had performed three miracles, in which to him, classifies Mary as saint-like.

However, societal views on her “miraculous” actions suggest that Mary Dempster is a “Fools saint,” (Davies 131). Society prejudges Mary as they believe rather than her actions stemming from the goodness of her heart, they are instead driven by insanity. Mary is Dunny’s inspiration for his intrigue of the path of mythology, saints and longing for knowledge and inner spirituality. To conclude, Davies displays the importance that female roles have in shaping the growth of man. As Dunstan proceeds to transform, and mature throughout his life, he is guided by the women he encounters. The reader visualizes how Dunstan matures and discovers more about his identity with the help of womanly aid. Dunny is initially perceived as a blank canvas as a child, however, as he matures throughout his life, he constantly is structured, re-shaped and painted into an ever-changing work of art, with maternal and female roles as his artist. Davies uses Dunstan’s self-discovery to explain that the behavior of a man as he matures is a product of female insight and womanly assistance. 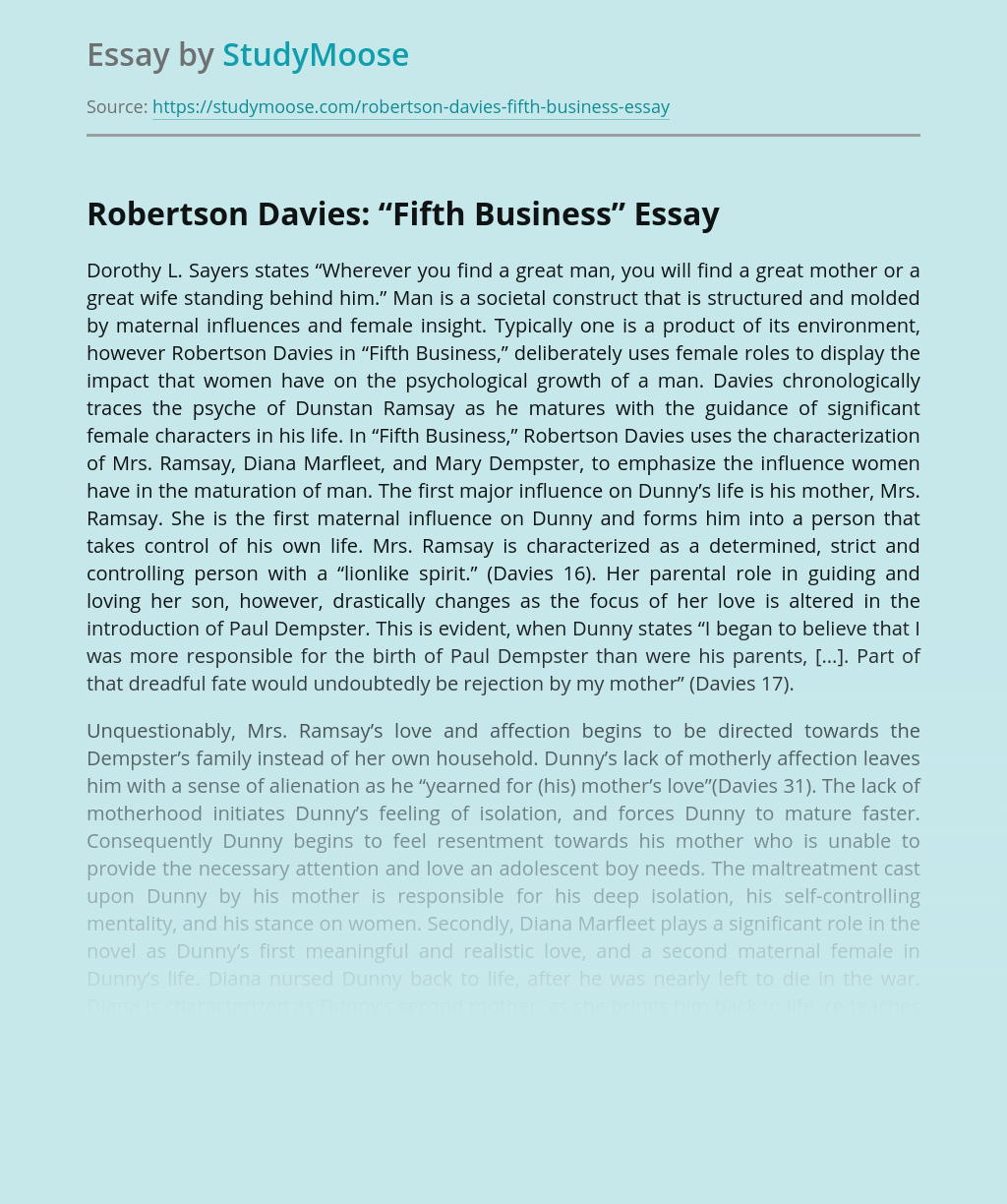