Don't use plagiarized sources. Get your custom essay on
“ Road Safety: Factors Contributing to Accidents ”
Get custom paper
NEW! smart matching with writer

You’re something to someone. Risking your life on the road may seem like the right thing to do when surrounded by your peers but in the long run, it isn’t worth the pain of death. It takes a mother a lifetime to forget the pain.

They are the leading cause of death among young people ages 15-29, more than half of all deaths occurring amongst young adults ages 15-44 and they’re the second leading cause of death worldwide among young people ages 5-14. Factors that can contribute to the horrific behaviour of these drivers are; Negligence – Their failure to observe upon normal road safety rules and procedures.

Temper – Can cause the driver to make irrational decisions and disregard their simple road knowledge to let the anger take over they’re driving, common sense and mind. Hasty decisions – Making the driver act before thinking causing them to take the easy way out.

Lack of attention – Causing them to not be alert (e.g. daydreaming, phones etc.) Distractions – Interruptions by others like passengers or children diverting their attention from the task at hand. Curiosity – Having something happening outside the vehicle or within can divert the driver’s attention once again. Over-confidence – Displaying risky behaviours and being cocky to impress peers either in or out of the vehicle. If you happen to display any of the afore mentioned behaviours, I recommend you straighten up your act to save a life or two in the future because you never know when you’ll be in the wrong place at the wrong time Everyone knows that whilst driving, nature surrounds you so it’s not surprise that environmental factors can cause a number of deaths in road accidents. Some factors leading to those can be; Slippery road – Due to weather either on the day of driving or the day before. Road layout – E.g. hills, bends, narrow roads.

Deposits on the road – E.g. Oil, mud, sand.
Animal/object – An animal can run in front of a vehicle or an object (e.g. ball) can have rolled in front of the vehicle causing an unexpected stop. Inadequate road signs – Insufficient amount of signs placed on the roads. Defective traffic signals – Let’s say a traffic light is blown and an oncoming car has no idea causing them Vehicles are obviously part of an accident with a high involvement in the reason people lose their lives. I can’t tell you to stop driving but I can tell you to never get behind the wheel of a vehicle when fatigued, intoxicated, or drugged. Those 3 factors can lead to many fatal car crashes. On the band of vehicles, components that cause accidents are; Tyres – Illegal, under deflated or defective.

Consequences are things we face each and every day of our lives whether good or bad so it’s not surprising that driving carries consequences too, many of which are dangerously life threatening. Unsafe road behaviour can lead to disabilities, brain damage, paralysis, and worst of all death for either the driver or passengers. The effect that this behaviour can cause is indescribable and horrifying not only for the people involved, but for the families and community as a whole. I cannot imagine the effect death would behold on the closest member of the victims family but I do believe that the feeling would be horrific. I, along with many others, know what it’s like to lose a member of the family or someone who feels as close to you as family does and it hurts. In normal loses, its uncommon to know that they’ll never live another day so I can imagine the aching feeling left in the pit of the person who chose to answer the phone at the wrong time. Getting a call to say there’s been a terrible accident and I’m afraid your son/daughter didn’t make it would be the end of a parent’s world and even worse when the news is delivered in person.

Behaving in an unsafe manner on the roads is not only affecting your life and health, it’s affecting the lives of everyone surrounding you. Young people are known to be wild and cocky therefore the off road behaviour is generally taken on road. We need to implement ways of making our roads safer and drivers more aware of the consequences made by bad driving behaviours. Ways to promote safe road use can include; Seminars on the importance of driving safely and to broadcast the consequences of not following road rules. Real life crash survivors can be found to share their stories and regrets to further educate the brains of young people. More effective advertisements can be produced and broadcasted to capture the attentions of viewers (youths particularly) using the common scenarios they’re faced with. Creating posters and more advertisements telling the story of what can be lost and left behind when an accident causes death. In high schools, having posers put around, constant reminders of the consequences, little speeches and talks for the older end of the school to view and bring into perspective.

I believe that in saying all of the things I have in this campaign, it may open up the minds of us youths to the consequences not only made for ourselves but the wider community. Even when approaching your car door, take a minute to think about what the heck your risky behaviour is going to do today and then choose whether you want to continue with that behaviour or give it up. Chance takers are accident makers.

Road Safety: Factors Contributing to Accidents. (2016, May 13). Retrieved from https://studymoose.com/road-safety-factors-contributing-to-accidents-essay 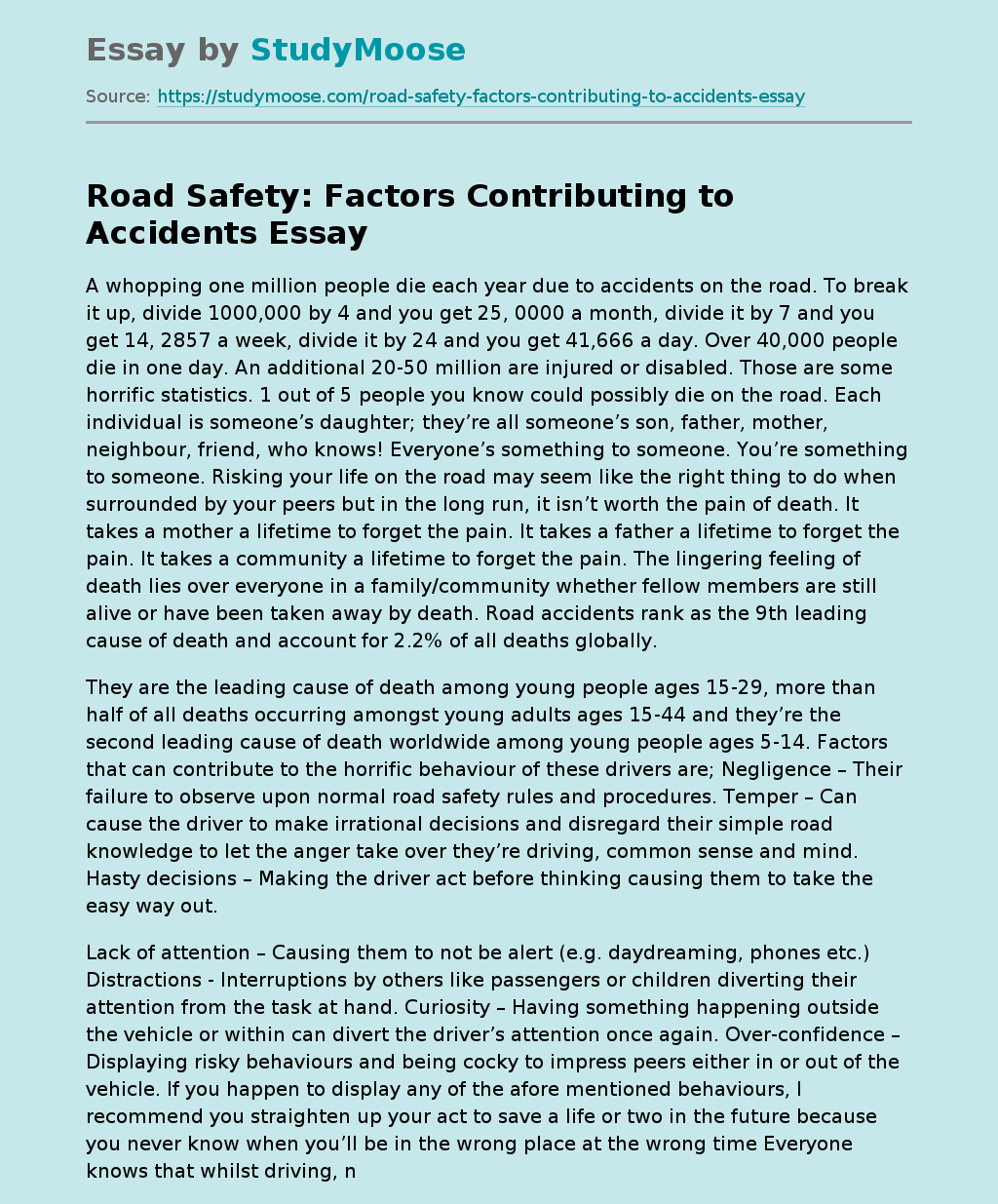