Why road congestion is a negative externality?

Congestion comes about when journey times taken by road users, are in excess of their normal expectations. It is simply initiated by too many cars pursuing too little road space. The demand for cars has far exceeded the supply due to increase in incomes and relative fall in the prices, thus more cars are on the road. This problem is heightened every day in London where the average speed in central London is 5.7mph, a mild jogging pace.

An array of negative externalities

More than one million people enter central London by all forms of transport and nearly 40 000 vehicles crowd onto the roads an hour.

Don't use plagiarized sources. Get your custom essay on
“ Why road congestion is a negative externality? ”
Get custom paper
NEW! smart matching with writer

The effects of Road congestion produce an array of negative externalities.

Air Pollution is a major externality, atmospheric emissions from pollutants produced by the internal combustion engine have an effect on air as well as on acid rain and global and regional warming. In urban regions such as London, 53% of air pollution emanates from automobile traffic.

Pollutants can cause respiratory troubles and aggravate cardiovascular illnesses.

Noise can be a nuisance to human health and welfare. Nose can be manifested in three levels depending on emissions intensity; psychological disturbances (displeasure and annoyance), functional disturbances (loss of sleep, speech interference) or physiological disturbances (serious health issues such as hearing damage.) Congestion can create much noise pollution due to constant gear changes and frequent impatient horns that contribute to the problem.

Water quality is also affected and is a big negative externality. Normal runoff of pollutants and debris from congestion of cars are contributors for the contamination of both surface and ground water.

Congestion and transportation percentage of water pollution is 4%. Finally congestion can also induce stress and anxiety through road rage.

Congestion in London is a form of market failure. The marginal cost to the consumer is the cost considered when a driver makes the choice to use a car. The costs to other road users and costs to society are not taken into consideration. The marginal cost to other road users is added congestion caused by that extra car on the road. The extra cost to society is the increase in emissions produced by a extra journey and the negative impact of that journey. There is also a marginal cost to the individual as there is an opportunity cost of the time spent in congestion or standstill, which is the case for 27% of journeys coming into Central London in the mornings.

What measures can be used to ease road congestion?

Building new roads or improving roads can be the best long term solution to solving traffic congestion. Bypass schemes and motorways take traffic away from urban areas, reducing pollution. Better roads also lead to shorter journey times, resulting in a massive saving for the economy as transport costs fall. However, building new roads could create problems. Shorter journey times will encourage businesses and people to make more journeys. People may switch from other forms of transport such as rail, or increase the number or length of journeys made. Therefore making more congestion on the roads.

Privatising the roads can be achieved in a numerous of ways. One way would be to invite private construction companies to bid for contacts to build motorways which they would pay for, and allow them to charge tolls to motorways users. The advantage is that they can be set at levels which allow the free flow of traffic on the motorway. The higher the potential congestion the higher toll charged. Also if a stretch of motorway is too congested on a particular day or at a particular time of day, the motorway owners could charge a higher toll to relieve the congestion. Therefore this would reduce the amount of traffic.

If bus lanes were introduced then it will restrict car access through giving priority to buses, so making using public transport a more attractive alternative to the car. The time saved by using buses will encourage individuals to go from using private transport to public transport. This will reduce the amount of vehicles on the road and the amount of congestion. However, this may not be successful if the bus service is not of good quality, and run regularly. If this isn’t the case then individuals will not change from using the car to the bus. It is not a short term solution; it may take some time for people to swap to using buses rather than cars.

Another way to reduce congestion would be to charge people to use the roads. This could be done by cars being fitted with a meter. This could be fed with pre-paid cards, such as telephone cards or with points which would be used up as the car went along. Or the meter would be read on a regular basis, maybe once a year when the car was given its MOT. They would then be billed after the mileage had been done. The meters would be activated by beacons on the road side or gantries over the road. This would discourage motorists driving along congested roads, and therefore reducing congestion. However, there are problems with this, the technology would be expensive to introduce and the system would have running costs. Also motorists regard the roads as ‘free’ and would resent having to pay for them, and so there would be political backlashes.

By reducing the traffic speed this will increase the level of congestion. So this may encourage car drivers to seek alternative means of transport. In the long run this should encourage individuals to switch to a non-car mode of transport, reducing car use and congestion. However, the problems of this policy are the change and the amount of time it may take for the policy to have effect. The policy will cause more problems in the short run and may therefore be ineffective in the long run. The policy may be ineffective because of the problems of finding a readily available alternative to private car use.

I personally think Mr. Cristy should walk to school because he sets trends. If he walks then so will all his millions of fans, the roads will be empty! He should also transfer his credit card account to save more money. The money saved can then be ploughed back into good walking shoes and possibly a new suit!

Why road congestion is a negative externality?. (2020, Jun 02). Retrieved from http://studymoose.com/road-congestion-negative-externality-new-essay 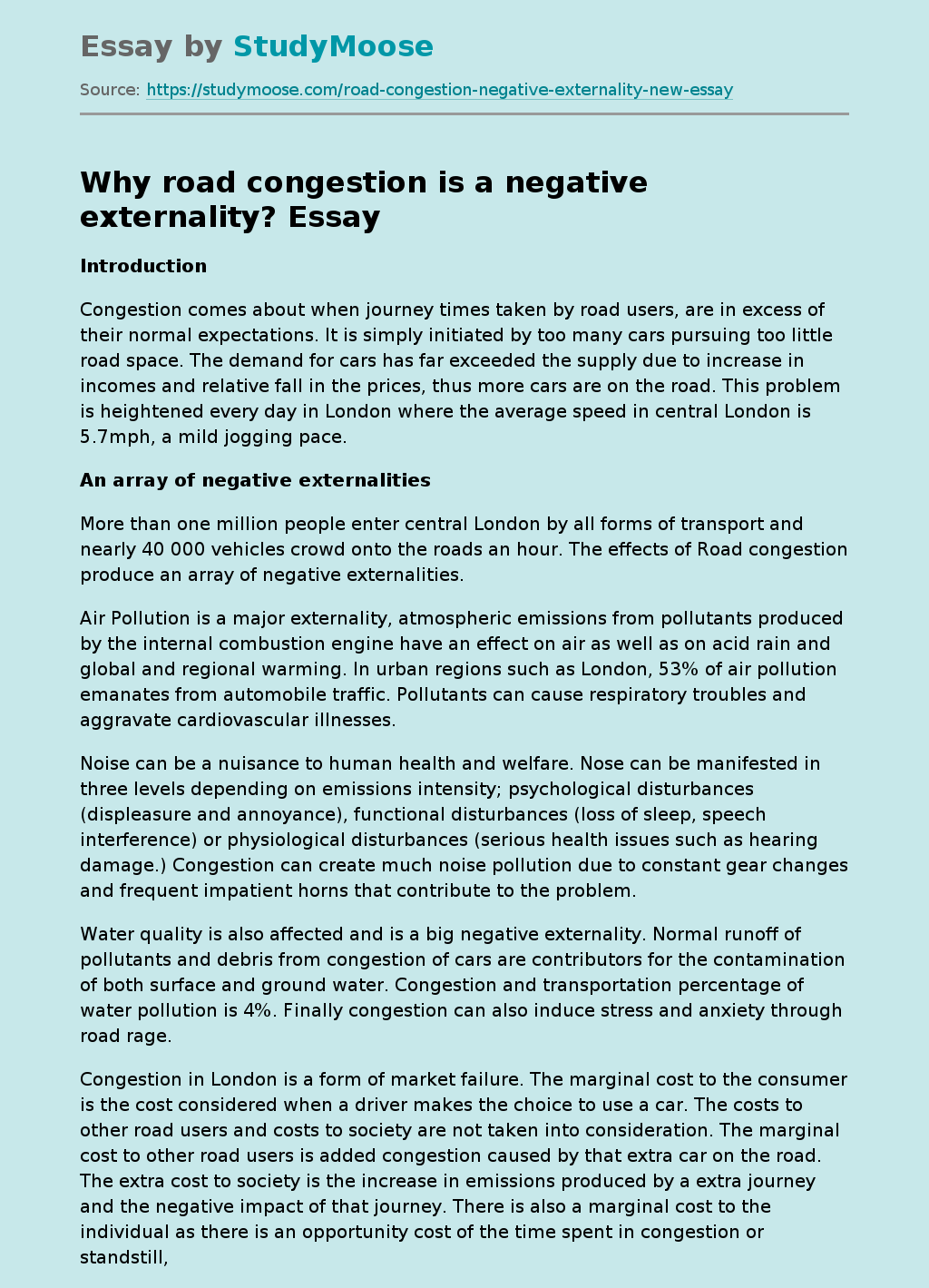