Rizal’s Visit to the United States

April 28, 1888 He saw the discriminatory treatment of the Chinese and the Negros by the white Americans “The Streamer Belgic” Name of Rizal’s – The name of the Ship docked at San Francisco Saturday morning. 2 agencies that certified Belgic are free from cholera epidemic The America consul of Japan the British government of Hong Kong. Cholera – raging epidemic in the Far East according to the Americans All passengers are quarantined for safety Rizal was surprised because there is no outbreak of the disease in the Far East, thus he joined other passengers in protest.

Don't use plagiarized sources. Get your custom essay on
“ Rizal’s Visit to the United States ”
Get custom paper
NEW! smart matching with writer

The ship was carrying 643 Chinese coolies

700 bales of valuable Chinese silk were landed without fumigation.
Rizal in San Francisco
Friday May 4, 1888 Rizal permitted to go ashore, he was registered in PALACE HOTEL, a first-class hotel in the city. 4$ is the daily lodge on the PALACE HOTEL
Leland Stanford – Millionaire senator representing California in the US. He was also the Founder and Benefactor of Stanford University at Palo Alto, California.

Dupon Street in China town which is Grant Avenue Today

He stayed in San Francisco for 2 more days –MAY 4 to 6, 1888. Grover Cleveland- The President of the United Stated at that time. Across the American Continent
May 6, 1888- Rizal Left San Francisco for Oakland, 9 miles across San Francisco Bay by ferry boat Travel via Train

He took his supper at Sacramento for 75 cents and slept in his coach. May 7 ,1888 he has a good breakfast at Reno, Nevada glamourized by American, high-pressure propaganda as the “The Biggest Little City in the World” Utah – where he saw Mormons, thickly populated – Colorado a lot of snow and pine trees Nebraska – Omaha City, as big as San Francisco– Missouri River – twice as big as Pasig River– Chicago – a lot of Indians in cigar stores– Albany – where he saw the Hudson River Rizal in New York

May 13 1888 Rizal reached the New York, He stayed 3 days in the city, which he was called “ The Big Town” He was awed and inspired by the memorial of George Washington.

He wrote to Ponce: “He is a great man who, I think has no equal in this country.” May 16, 1888, he left the New York for Liverpool on board the “City of Rome”. The second largest ship in the world, the largest being the “Great Eastern” He saw with Trilling sensation the colossal Statue of Liberty on Bedloe Island. Rizal’s Impression of America

The good impressions
1. The material progress of the country as shown in the great cities, huge farms, flourishing industries and busy factories.
2. The drive and energy of the American people
3. The Natural beauty of the land.
4. The high standard of living
5. The opportunities for better life offered to poor immigrants. The bad impression
1. Lack of racial equality.
2. There existed racial prejudice which was inconsistent with the principles of democracy and freedom of which the America talks so much but do not practice. 3. They do not have civil liberty. In some states the Negro cannot marry a white woman, nor a White man a Negress. 4. Hatred against the Chinese leads to difficulty for other Asiatics who, like the Japanese, are mistaken for Chinese by the ignorant, and therefore being disliked too. 1890- 2 years after Rizal visit the US

Jose Alejandro- studying engineering in Belgium, roomed with him on the 38 Rue Philippe Champagne, Brussels, Alejandro asked Rizal “what impressions do you have of America? Rizal: “ Is the land par excellence of freedom but only for whites.”

Rizal’s Visit to the United States. (2016, Aug 20). Retrieved from https://studymoose.com/rizals-visit-to-the-united-states-essay 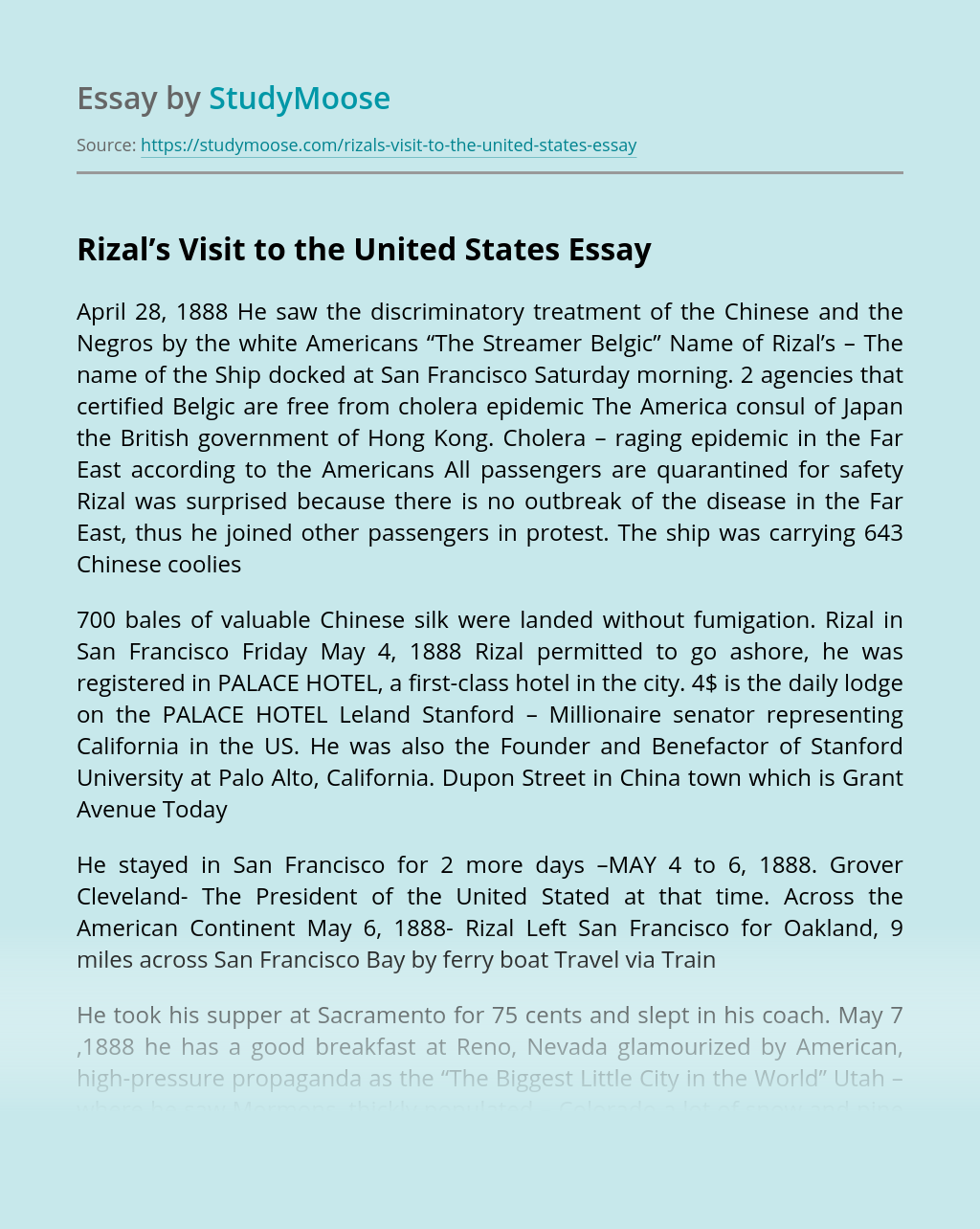