* Calamba:
* It is belonged to dominican order which is the a picturesque town nestling on a verdant plain covered with irrigated ricefields and sugarlands.
* Mount Makiling:
* The south of Calamba in which beyond it is the province of Batangas.
* Laguna De Bay:
* It is the east of Calamba, it is the famous mountain shrine of the miraculous Lady of Peace and Good Voyage.
* Un Recuerdo A Mi Pueblo (In Memory Of My Town):
* A poem wrote by Rizal when he was 15 years old and was a student of Ateneo De Manila.

Don't use plagiarized sources.
Get Your Custom Essay on Rizal’s Childhood Years Just from $13,9/Page

* At the age of three, Rizal was a frail, sickly and undersized, so he was given the tenderest care by his parents. During childhood memory, he was know how to pray the angelus. The imaginary tales by aya (nurse maid) makes Rizal enduring interest in legends and folklore.

* The first sorrow of Rizal was brought by the death of his beloved little sister Concha.

Concha died of sickness in 1865, she was only 6 years old from there. Jose shed tears for the first time caused by love and grief to his sister.

* D. Devoted Son Of The Church

* Rizal grew up as a good Catholic. Ta the age of three, he began to take part in the family prayers. When he was five, he was able to read haltingly the Spanish family Bible.father Lorencio Lopez, the town Priest, is one of the men that Rizal esteemed. He used to visit this learned Filipino priest and listen to his stimulating opinion on current events and sound philosophy of life.

* E. The Pilgimage To Antipolo

* On June 6, 1868, Jose and his father left Calamba to go on a pilgimage to Antipolo in order to fulfill his mother’s vow which was made when Jpse was born. After praying at the shrine of the virgin of Antipolo, they went to Manila to visit Saturnina, who was then a boarding student at La Concordia College in Sta. Ana.

* The story told by Do?a Teodora to her…
* Another childhood memory was the daily Angelus prayer. By nightfall, Rizal related, his mother gathered all the children at the house to pray the Angelus.

* With nostalgic feeling, he also remembered the happy moonlit nights at the azotea after the rosary. * The aya realted stories to Rizal children many stories about fairies; tales of buried treasure and trees with blooming diamonds, and other fabulous stories. * Their parents taught them to love one another, to behave properly in front of elders, to be truthful and religious, and to help one another. * At the age of 3, he began to take part in the family prayers. * When he was five years old, he was able to read haltingly the family bible. * He loved to go to church to pray, to take part in novenas, and to join the religious processions. It is said that he was so seriously devout that he was laughingly called Manong Jose by the Hermanos and Hermanas Terceras. * On June 6, 1868, Jose and his father left for Calamba to go on a pilgrimage to Antipolo, in order to fulfill his mother’s vow which was made when Rizal was born.

* It was the first trip of Jose across Laguna de Bay and his pilgrimage to Antipolo. * He was thrilled, as a typical boy should, by his first lake voyage. He did not sleep the whole night as the Casco sailed towards the Pasig River because he was awed by “ the magnificence of the watery expanse and the silence of the night. * After praying at the shrine of the Virgin of Antipolo, Jose and his father went to Manila. * At the age of 3, Jose learned the alphabet and prayers from her. * Seeing Rizal had a talent for poetry, she encouraged him to write poems. She gave her all her love and all that she learned in college. * There were 3 uncles, brothers of his mother, who played a great part in the early education of Rizal. * Uncle Gregorio was a lover of books. He instilled into the mind of his nephew a great love for books. He taught him to work hard, to think for himself, and to observe life keenly.

* Uncle Jose, who had been educated at Calcutta, India, was the youngest brother of Dona Teodora. He encouraged his nephew to paint, sketch, and sculpture. * Uncle Manuel was a big, strong, and husky man. He looked after the physical training of his sickly and weak nephew. He encourages Rizal to learn swimming, fencing, wrestling, and other sports, so that in later years Rizal’s frail body acquired agility, endurance, and strength. * He loved to ride on a spirited pony (which his father bought for him) or take long walks in the meadows for him) or take long walks in the meadows and lakeshore with his big black dog named Usman.

DIONISIO, Dannica Joy M. BSN 3-A02Ch. 2: CHILDHOOD YEARS INCALAMBA 2.1. Calamba, the Hero’s Town: hacienda town which belonged to the Dominican order; to the South is MtMakiling (with Batangas beyond the mountain), East is Laguna de Bay, Northis Antipolo2.2. Earliest Childhood Memories: had to be given the tenderness care by his parents for being frail, sickly and undersized; daily Angelus prayer; happy moonlit nights at the azotea

; being threatened with asuang, nuno, tikbalang or Bombay  if he would not eat his supper2.3. First Sorrow – death of Concha at 3.2.4. Devoted Son of the Church – taught Catholic prayers by Mom; read Spanishfamily Bible at 5; admired Filipino priest Fr. Leoncio Lopez2.5. Pilgrimage to Antipolo – June 6, 1868with his father riding in a Casco

(barge)2.6. Story of the Moth – fable about “being obedient to your mother or else you may get burnt”2.7. Artistic Talents – sketching and claymolding (or sculpturing) 2.8. First Poem – “ Sa Aking Mga Kababata

Chinese (serious nature, frugality, patience and love for children);Spanish – elegance of bearing and gallantry to ladies; (2) Environmental –scenic beauties of Calamba stimulated the artistic and literary talents; Paciano –love of freedom; sisters – kindness to women; Fr.Leoncio Lopez – scholarship and intellectual honesty; GomBurZa in1872 – spirit of patriotism; (3) Aid of Divine Providence – versatile gifts of genius, heart to sacrifice for a noble cause; destiny to be the pride and glory of his nation 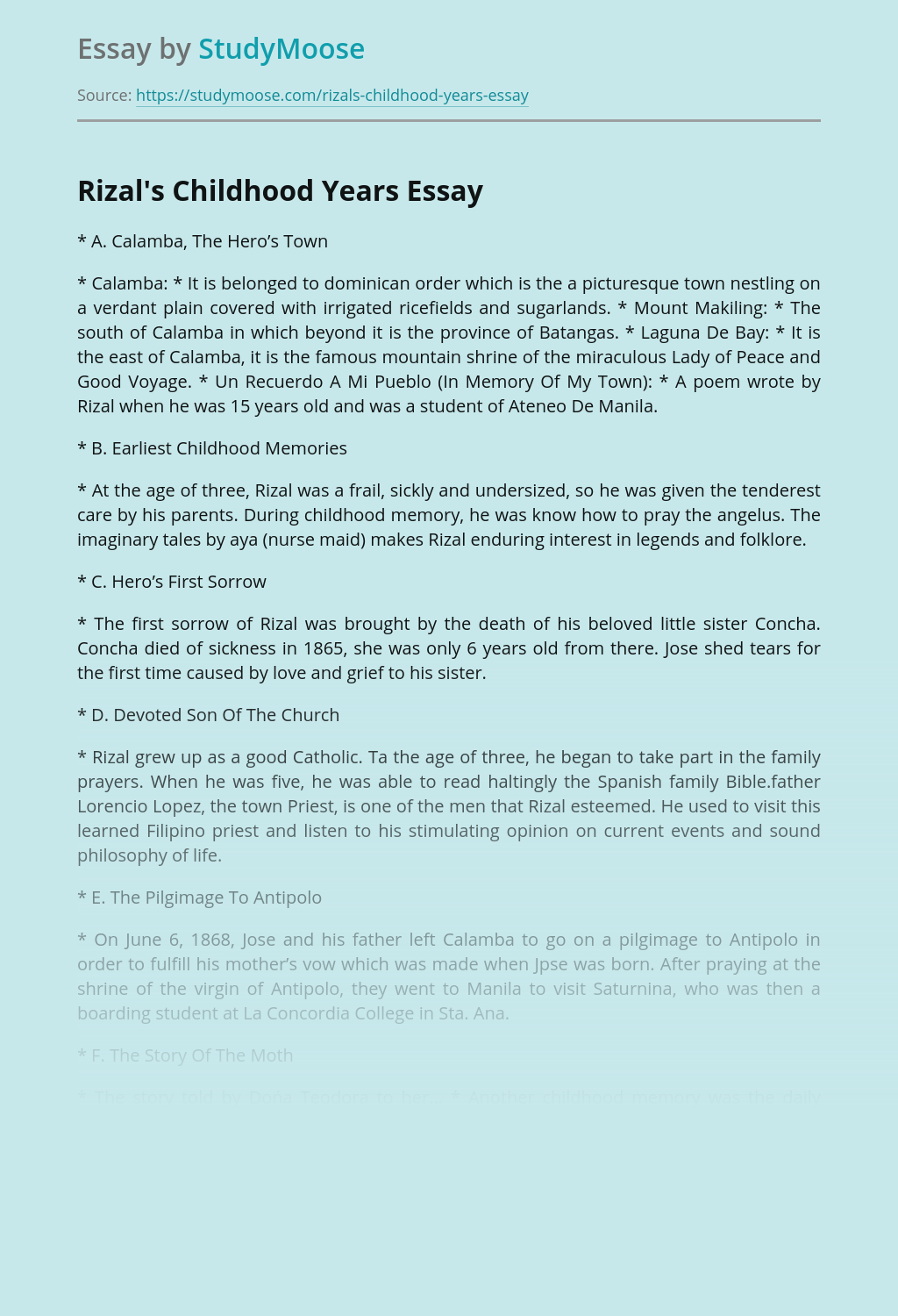 Working with children will often involve you working closely with families and different agencies. Multi-agency working and integrated working plays a very important part in ensuring children and families with additional needs are provided with the best possible support. Multi-agency working requires practitioners and professionals from different sectors and within the workforce to provide integrated...

The Framework for the Assessment of Children in Need and their Families (which I will refer to as the assessment framework in this assignment) is an ecological framework that includes personal, intra-personal, inter-personal and sociological influences on development. It was developed in response to findings from a programme of research on child protection (Department of...

I. STATEMENT OF THE PROBLEM How do Filipino children integrate the Internet and mobile phone into their everyday life and peer and family relationships? This study is a response to a suggestion by Sonia Livingstone (2003) to investigate further children’s relationships in the new media environment. It also seeks to address the lack of empirical...

In this article, Last Child in the Woods, Richard Louv describes the importance that children have the ability to grow up and experience as their parents did through the back seat of a car. Louv’s purpose is to compel parents to stop giving in to technological advances and to start persuading their children to embrace...