Rizal left Hong Kong on board of the Oceanic, an American steamer on his way to Japan which was “The Land of Cherry Blossoms”. He arrived in Yokohama and stayed for one day in Grand Hotel. Then he went to Tokyo and stayed at the Tokyo Hotel. He stayed with Juan Perez Caballero after his invitation which was also plotted by the Spaniards to monitor him. He agreed for couple of reasons, first was economizing his living expenses and the second is that he has nothing to hide from them.

He liked the country but has something that he despised, it’s the Rickshaw transportation. He felt pity in the way that man was being used as a horse. In Japan, Rizal met O-Sei-San who was a daughter of a samurai who owned the store Rizal visits. Rizal fell greatly in-love with O-Sei-San that he was tempted to leave the Philippines and settle down in Japan. But because of his duty to the freedom of his fatherland, Rizal left Japan through the ship Belgic which was going to the United States.

Through the steamer Belgic, Rizal arrived in San Francisco on April 28, 1888. Even though the Belgic was approved of having no Cholera, it was not permitted to dock. The passengers including Rizal were quarantined. After a week Rizal together with other first class passengers were permitted to land. But the Japanese and the Chinese and passengers belonging to the second and thirds class remained aboard. Rizal stayed in the Palace Hotel while he was in San Francisco.

Then Rizal travelled across different places like Oakland to his last stop which was New York City where he stayed for three days He left the United States for Liverpool, London on board the City of Rome, the second largest ship in the world. Like Japan, he liked America. But there is also one thing
that he doesn’t. It’s the lack of true liberty and racial equality between the “whites” and the “blacks”.

He lived in London after docking in Liverpool. He stayed there for three reasons, first was to improve his knowledge of the English Language, second was to study and annotate Morga’s Sucesos de Las Islas Filipinas and last is that London was a safe place for him to carry on his fight against Spanish Tyranny. Here in London, Rizal met Gertrude Beckett. He and Gertrude found romance at each other. He also met Dr. Rost which was one of the people who helped him in his study in London. He received some news from Philippines, some were good but mostly bad. To further his study of Morga’s work, he visited Paris, there he met with Juan Luna and his wife, Marcelo H. del Pilar, and Mariano Ponce. Rizal has a lot of works created in London, he wrote some articles for the La Solidaridad which was founded by Lopez Jaena. He also wrote some for Dr. Rost. He also created some sculptures including the composite carvings of the three Beckett sisters. On March 19, 1889, Rizal left London.

After Rizal stayed in London, he moved to Paris. Timely there is an International Exposition being held at Paris. He met a lot of families like the Pardo de Taveras, the Venturas and even the Bousteads where he spent some time with. Rizal met two lovely ladies, Nellie Boustead and Adelina Boustead which Rizal had a romantic relationship with.

Rizal in Paris founded two club/group which was the Kidlat Club and the Indios Bravos. He also had some projects like the International Association of Filipinologist and the construction of a modern Filipino college in Hong Kong in which Mr. Cunanan promised Rizal to give forty thousand pesos as an initial capital.

Rizal got conflict with Antonio Luna who thought Rizal was in love with Nellie. They settled this with a duel. Fortunately everything was cleared out. Rizal also tried to proposed to Adelina but fail because Adelina was not sure Rizl loved her because of his broken engagement to Leonor Rivera, also Rizal refused to accept the condition that he will become a protestant like her and last, Adelina’s mother opposed the match because Rizal was not rich enough to support a family in style.

Rizal went to live in Brussels for two reasons, first was the cost of living in Paris was very high because of the international exposition and second was the gay social life of the city hampered his literary works especially the writing of his second novel El Filibusterismo. He was very busy in Brussels, he concentrated in finishing his work. He spent some time in the medical clinic and also in gymnasium. He also wrote some articles for the La Solidaridad. He also wrote a poem entitled “To My Muse”.

Again as we know Rizal, he met a petite Suzanne Jacoby which he had romanced with. Suzanne was the niece of his land ladies. Like all the other women, She cried when he left toward the end of July, 1890 for Madrid, stopping for a few days in Paris.

Rizal again received some terrible news from home. With these happening to his family, he was in despair, he had some premonitions of his early death. He wasn’t really afraid to die but all he wanted was to finish his work because no one would continue it. So he decided to go home even with the warnings of his friends not to.

But suddenly something happened, the appeal for the case in Philippines lost but Paciano appealed to the Supreme Court in Spain. So Rizal went to Madrid to supervise the Case.

Rizal went to Madrid to seek justice for his family. He was accompanied by M.H. del Pilar as their lawyer. Rizal tried his best to seek some help from different people and organizations. But overall, he failed.

Again Rizal received some more disturbing news from Philippines, it was stated that his family was ejected from their homes and were living with Narcisa.

Another disappointment was the death of Jose Ma. Panganiban who was Rizal’s talented friend and co-worker in the propaganda. He also received a letter which states that Leonor Rivera will be married to another man. Many bad thing happened in Madrid for Rizal, things became worst when he had a rivalry between M.H. del Pilar for they were competitors for the election. Rizal decided to abdicated his running for leadership and went back to Brussels to finish his second novel.

When Rizal finally finished the El Filibusterismo after three years, he decided to move to Ghent where in the printing cost was cheaper and also to escape from Suzanne which maybe was getting on his nerves. He travelled with Jose Alejandro and they economized their living.

The printing was on installment basis because Rizal doesn’t have much money. He did everything he could to have the money to finish the printing of the El Filibusterismo. Again same with the last novel, he almost destroyed the original manuscript because of frustrations. But luckily, Rizal’s friend Valentin Ventura heard of his predicament and offered to give a hand. He gave Rizal enough money to finish the printing. He was the Hero of “El Fili” and Rizal was very grateful to him. Rizal thanked him and gave him the original manuscript with Rizal’s autograph.

After the second novel, Rizal planned to have a third one. He failed with it along with other novels he tried to write. There were so many, some even with no titles yet. Some were in tagalog but he didn’t finish it because of the inadequacy of his knowledge in tagalog language.

After the publication of El Filibusterismo, Rizal left Europe and lived in Hong Kong because life was unbearable in Europe due to his political differences with M.H. del Pilar and other Filipinos in Spain and to lead the propaganda movement in Hong Kong and last was to be near his beloved Philippines and family.

In this time, Rizal continues to study and practice his medical profession. He was praised and congratulated by a lot of people. He also wrote a lot of things while he was in Hong Kong. Some were for the propaganda movement in getting liberty from the Spaniards.

Rizal decided to go to Manila. It was because he wants to confer with Governor Despujol regarding his Borneo colonization project and to establish the Liga Filipina in Manila and to prove that Eduardo de Lete was wrong in attacking him in Madrid that Rizal, being comfortable and safe in Hong Kong had abandoned the country’s cause.

Rizal arrived in Manila with his sister Lucia. He immediately did what he needed in order to have a conference with Gen. Despujol. He had several meetings with him and made him agree to pardon his father and sisters. Rizal also visited some of his friends which were raided by the Guardia Civil after his visit. He also founded the Liga which were a group of patriot Filipinos helping the cause of freedom.

During one of Rizal’s visit to Gen. Despujol, he was shown some leaflets that were some sort of attack to the Spanish friars that were said to be found in his sister’s pillow case. Even though Rizal denied the accusations, he was still placed under arrest. He was sent to Fort Santiago escorted by the nephew of the general.

After some time, it was decided that Rizal will be exiled to Dapitan. He departed though a heavy guarded steamer called “Cebu” under Captain Delgras. Rizal arrived in Dapitan and started his lonely exile for four years.

Rizal Book Summary and Reactions. (2016, May 04). Retrieved from http://studymoose.com/rizal-book-summary-and-reactions-essay 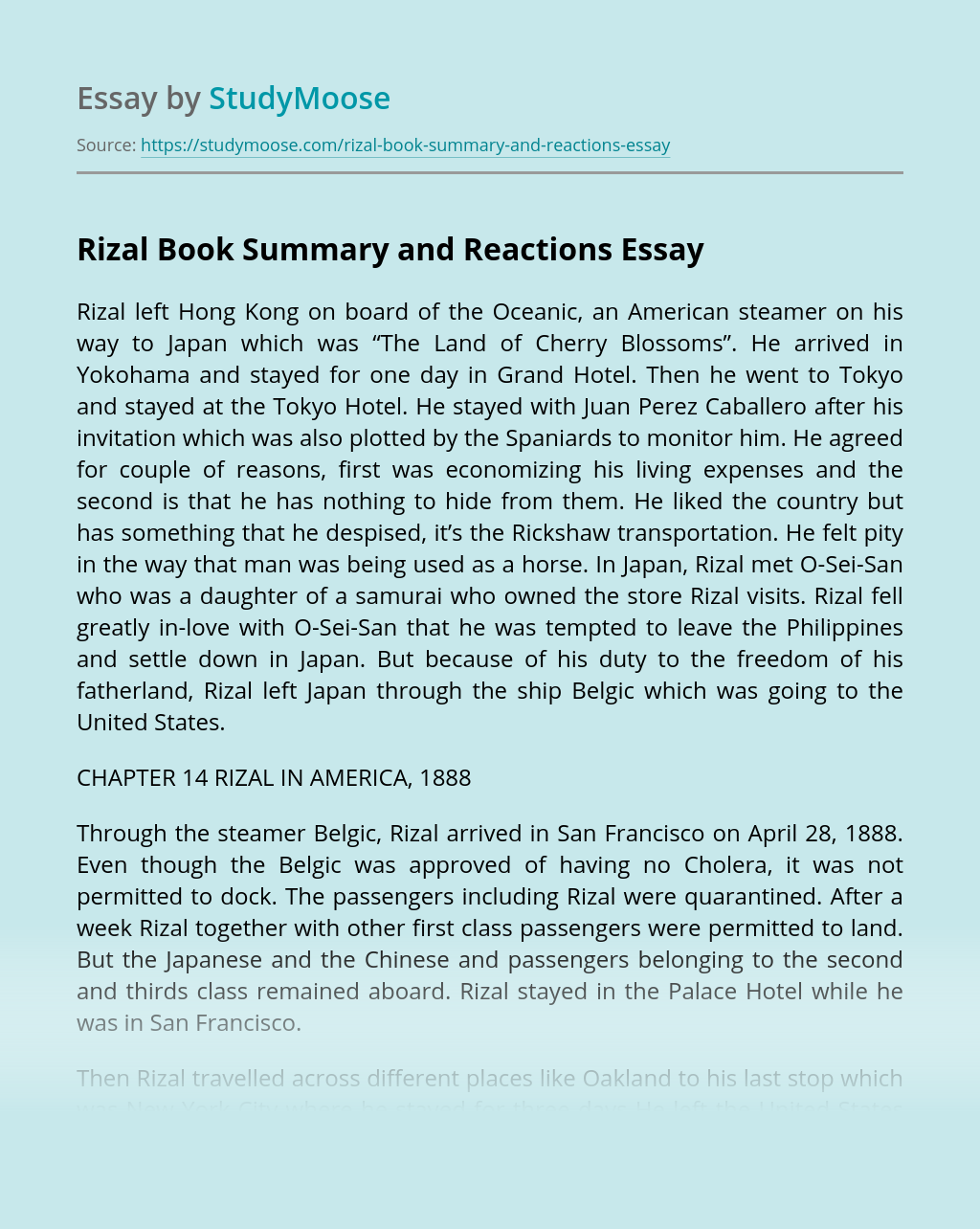