River Systems Between India and Nepal

There are minor problem areas regarding sharing of river waters between India and Nepal and mechanisms are in place for joint exploitation of the water resource (Dipak Gayawali, ‘Basics of Nepali hydro-diplomacy’ para 3 pp 23-47). Management of the Koshi, Gandaki and Karnali river systems is vital for the prosperity of both the countries. They have entered into a large number of multipurpose projects for joint utilization. Some important details are discussed in subsequent paragraphs.

Don't use plagiarized sources. Get your custom essay on
“ River Systems Between India and Nepal ”
Get custom paper
NEW! smart matching with writer

The Treaty on integrated development of Mahakali River was signed on February 1996. Pancheshwar Multipurpose Project (River Sarda in India) is the centerpiece of the treaty. The project will have power, irrigation and incidental flood control benefits for India and Nepal.

2.8.3 Bilateral Cooperation Mechanisms. A 1986 Standing committee for inundation and flood mitigation, 1989 Flood Forecasting and Warning System, exchange of hydrological and meteorological data and a Nepal “ India joint committee on water resources headed by respective Water Resources Secretaries is functioning, as an Umbrella Committee of all committees and groups.

Nepal’s economically viable hydro power potential is pegged at 40,000 MW, but it has managed to develop only 600 MW. Nepal can tap this natural resource to generate annual revenue of US $ 8 billion through export of power to the GBM region.

The dams can also solve the problem of augmenting the lean season flow of Ganges, flood and drought mitigation and providing sea access to Nepal.

India’s relations with Bhutan on water cooperation are stress free and non-problematic. Cooperation is based on tapping the existing natural resources and supply to the neighbors. India provides aids and assists in construction of hydro power plants and then purchases the power so generated. The Indo-Bhutan hydro cooperation has been a success story which has manifested in better relations in all facets. Bhutan has four major rivers, Torsa, Sankosh, Wangchu and Manas (Indo- Bhutan hydro power initiative increase installation capacity published in Economics Times 26 March 2009) these have the potential to generate 20,000 MW (Nepali Times, 30 August 2000). Bhutan exports majority of electricity generated to India, thereby translating it into a win- win situation for both countries. India agreed to import at least 5,000 MW. In 2009, this was boosted to import 10,000 MW by 2020, otherwise known as the 10/20 program. In addition to hydro power generation, other aspects are addressed through a ‘Comprehensive Scheme of Hydro-Meteorological and Flood Forecasting Network’ and ‘Joint Group of Experts on Flood Management’ constituted between India and Bhutan, which advises both governments on related issues.

The Tibetan Plateau known as the ‘The Water Tower of Asiaџ with an average altitude of 4,500 m, stretches 2,400 Km from East to West and 1500 Km North to South, playing a major role towards Asian climate, weather and monsoon pattern. 6 major Asian river basins originate in the plateau, and 1.3 billion people depend on its water shed (Environment and Development Desk, 2012). The hydro power potential of this area has been calculated as 1305 TWH (www.tibetnature.net/en/introduction-water-resources/) Figure 6 – Rivers Flowing from the Tibetan Plateau (Buckley, 2014)

The details of the rivers flowing from the Plateau are tabulated below:- Table 2 – Rivers Flowing from Tibetan Plateau to other South Asia Countries (Tibet 2000 Environment and Development Issues, 2014) 2.14 China faces its water crisis like never before and this has threatened its economic, political and environmental sustainability. To this crisis, China has responded with urgency by building up the water infrastructure through dams and diversions over the rivers flowing within its geographical boundaries. Such interventions by China on the rivers can easily trigger natural disasters, degrade fragile ecologies and divert water supplies. On eight Tibetan rivers alone, almost 20 dams have been built or are under construction while some 40 more are planned or proposed.

Indus/Sutlej River System. China has completed a HEP with a medium-sized dam near Demchok, Ladakh on the Indus River (Sering, 2010). Two HEPs in western Tibet and Ngari, TAR on the Sutlej are complete as per the Satellite images. (Arpi, 2011) and (Holslag, 2011) 2.16 Yarlung-Tsangpo/ Brahmaputra. Brahmaputra River has a hydropower potential of 114 GW. The major structures completed include firstly, the 510 MW Zangmu HEP, TAR (2015). Secondly, 640 MW Dagu dam (124 m). Thirdly, Jiexu, Jiacha, Lengda, Zhongda and Landhzen dams with capacity of 300 to 800 MW. Table 3 – Dams Built by China on the Brahmaputra River and its Tributaries (Partial List as on 2014) Sources: Environment and Development Desk of Central Tibetan Administration; international rivers.org; China Daily

The Great Bend Project. The Tsangpo at the Great Bend has hydropower potential of generating 38 GW (Chellaney, 2012). China’s HEP at Motuo is planned to host major infrastructure projects, including nine hydropower projects of 6252 MW in the two major tributaries. (Maj Gen (Retd) Chaturvedi, 2013) 2.18 South to North Water Diversion Project (SNWDP). The multi-decade infrastructure project aims to divert water from the Yangtze River to the Yellow River and Hai River. The total project is cost $62 billion and by 2012 $34 billion had been spent. (Chellaney, 2012)

River Systems Between India and Nepal. (2016, Nov 09). Retrieved from https://studymoose.com/river-systems-between-india-and-nepal-essay 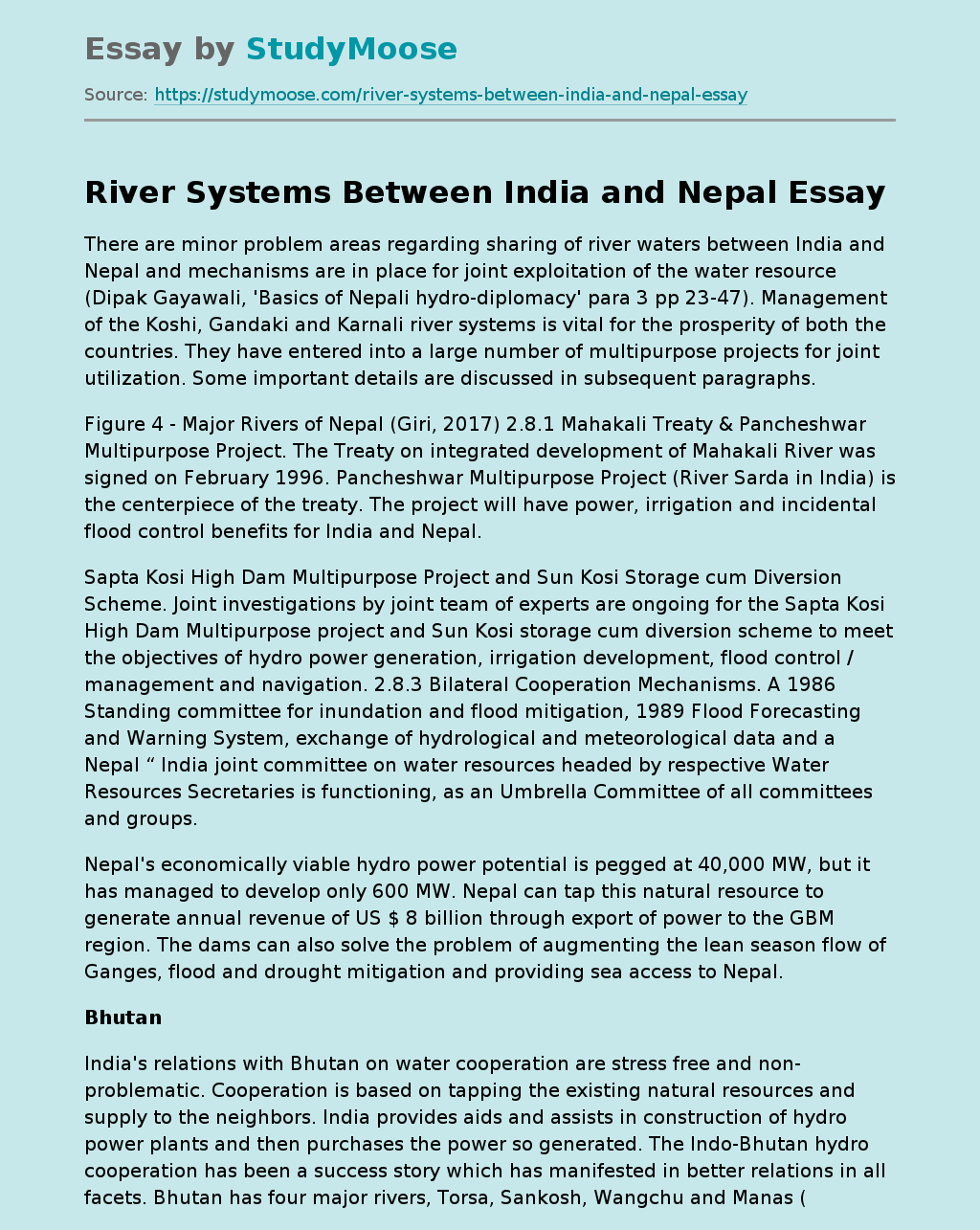