The water in most of our rivers is highly polluted. The pollution of river water is caused by the dumping of untreated sewage and industrial wastes into it. For example, the river Ganga which flows for over 2500 kilometres from Gangotri in the Himalayas to Ganga Sagar in the Bay of Bengal is being turned into a dirty water drain by the discharge of untreated sewage and industrial wastes emanating from more than a hundred towns and cities which lie along its way.

Don't use plagiarized sources.
Get Your Custom Essay on River pollution Just from $13,9/Page

In addition to sewage and industrial wastes, the pollution of river Ganga is also caused by other human activities like bathing, washing of clothes, immersion of ashes of the dead and dumping of unburnt corpses in its water. The industries also discharge chemical effluents into the river water. The toxicity of these chemical effluents kills the fish in many parts of the river.

The contamination of river water can be usually found from two factors: (i) the presence of coliform bacteria in river water, and (ii) measurement of pH of river water.

Coliform is a group of bacteria found in human intestines. The presence of coliform in the river water indicates its contamination by disease-causing micro-organisms.

This is because though coliform itself is harmless but its presence in river water indicates that other, more harmful, intestinal bacteria might also be present. The pH of river water is measured by using universal indicator paper. If the pH of river water is found to be below 7, then the river water will be acidic and hence polluted. A multicrore ‘Ganga Action Plan’ (GAP) project was launched in 1985 to clean the river Ganga and make its water pollution free.

Wells and tube-wells (bore-wells) are yet another source of water. Some of the rainwater which falls on earth seeps through the soil and goes down under the surface of the earth. Ultimately this water is stopped by some hard rocks and collects there. This underground water is taken out by digging a ‘well’ into the ground. This is called well water.

Such wells are a common sight in village areas. The deep tube- wells called ‘bore-wells’ are also dug into the earth which are much deeper than the ordinary wells and their water is drawn out by using water pumps. This water is used for the irrigation of crops and for drinking purposes.

When too much water is pumped out through deep tube-wells then the water table (level of water below the earth’s surface) gets lowered too much. This lowering of water table decreases the amount of available underground water.

In order to maintain the water table at a proper depth, it is necessary to ensure better percolation of rainwater into the soil. A scheme called ‘rainwater harvesting’ is recommended to stop flowing rainwater and make it percolate into the soil more efficiently.

River pollution. (2016, May 27). Retrieved from https://studymoose.com/river-pollution-essay 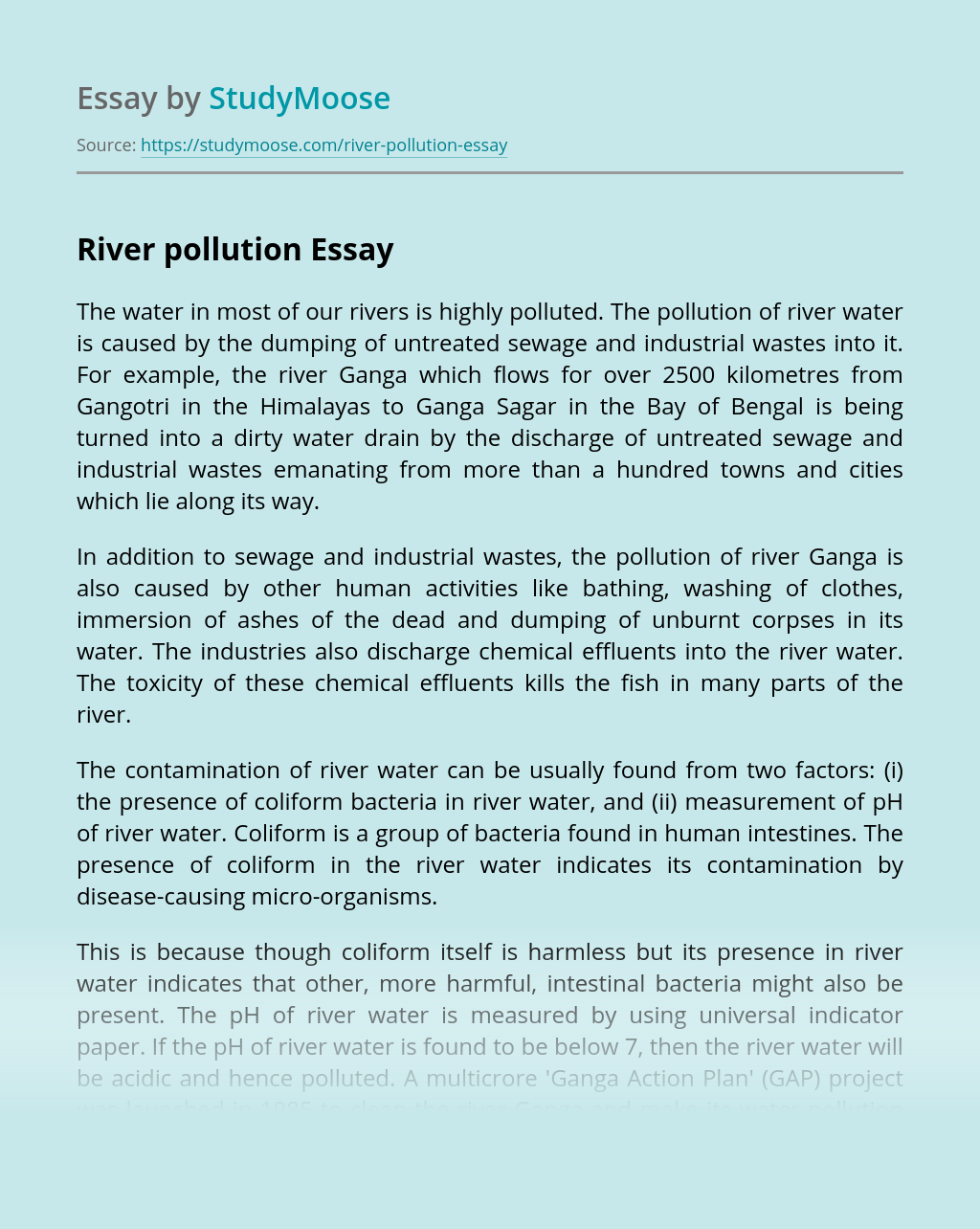 3.3 / 5 ( 3 votes ) How true these words sound in the present context. There is so much pollution all around us today that normal breathing in itself is the greatest risk to our lives. Pollution has affected our lives so adversely that because of this, millions of people die annually. The way...

Get Essay
What is Eutrophication?

3.3 / 5 ( 3 votes ) Generally, eutrophication occurs when the rate of nutrient accumulation is greater than the rate of nutrient removal (Heggie, 2006). Because of unnecessary high nutrient content of the soil, plants experience stunted growth, (as indicated in some of its salient features) fishes die in rapid succession, and a general...

The relationships between levels of dissolved nutrients and biotic life

3.3 / 5 ( 3 votes ) Approximately 844 million humans are lacking the access to water, and about 300,000 children die from diseases related to unclean water and weak sanitation ,this leads to the reason of why waste water should be treated and more importantly and specifically why domestic waste water should be separated...

3.3 / 5 ( 3 votes ) Role of Water Saving Technologies as a Measure to Avert Fluoride Contamination in Tamil Nadu Introduction In India most of the people are directly or indirectly related with agriculture sectors for their livelihoods. Groundwater is one of the major source of irrigation for agriculture activities. However, the availability...

3.3 / 5 ( 3 votes ) Abstract and Introduction: Wet detention ponds are likely the most not unusual control practice for the control of storm water runoff first-rate. If nicely designed, constructed, and maintained, there may be very effective in controlling a huge range of pollution and top runoff glide prices. There might be...

The recent El Ni?o season has greatly affected the water source of

3.3 / 5 ( 3 votes ) The recent El Ni?o season has greatly affected the water source of the vast majority of Luzon Island. Angat Dam has plummeted beyond critical water level. Last time this happened was about 10 years ago and water interruption deeply affected both the lives and the economy of the...