The risks and benefits of Facebook and social media

Nowadays, who doesn’t use Facebook, Twitter, MySpace, Youtube, Linkedin or other kind of social media? Even parents and grand parents get cracked for them. Social media are omnipresent in our lives. But before going further, let’s define what social media are.

Social media are forms of electronic communication (as Web sites for social networking and microblogging) through which users create online communities to share information, ideas, personal messages, and other content as pictures, videos, links and so on. As for traditional media, they delivers content but don’t allow readers, viewers and listeners to participate in the creation or development of the content.

Don't use plagiarized sources. Get your custom essay on
“ The risks and benefits of Facebook and social media ”
Get custom paper
NEW! smart matching with writer

More and more people are attracted by this kind of communication, especially by Facebook, because it is simple, free, and it is a way to keep always in touch family and friends. Furthermore, a lot of firms use them to spread adverts, and to make their own business. However, do Facebook and social media mean an opportunity or a threat for users?

It is indeed at the beginning of the 21st century that users were beginning to see the appeal of social networking and blogging sites like Friendster, Linkedin, and MySpace.

The last one (MySpace), had grown to be the most popular social network in the world. Users could create their own profile, and then post music from artists or videos from others websites.

Although MySpace was destined to be the most used social media all time, Facebook started out in 2004. First it was only a social network for Harvard students.

Nevertheless, it quickly expanded to other schools, then to businesses, and finally, everyone (in 2006). That’s why, in 2008, Facebook became the most popular social networking site, surpassing MySpace, and continues to grow. Currently, the number of Facebook users has reached more than 700 millions.

It can be said that social media, and especially Facebook started a trend. “Do you have Facebook?” became a famous sentence in the young generation conversation. Most of teenagers and young use social media to talk about their own life. Why? Let’s talk about the main reasons, which have made social media so famous.

First of all, making connexions. Join any social networking is the best way to know a lot of people in a short while and in a free way. You can be able to find friends on social networking and to chat with them online, to share with them your pictures, your videos. Well, to sum up, you share your life. Beyond that, many social media allow you to join to different events, from a party to a show for example.

Then if you are a musician, an actor, or someone who wants to become a star, you just have to create your own page on a social network, so you can keep fans informed about everything from your latest single to the next time you’ll perform.

Last but not least, a lot of applications are available on Facebook or MySpace, to have fun with friends on line, and everywhere.

Finally, social networking is very practical professionally. A firm can spread its advert on the on the social network, so customers can see it. Then, they may be able to by the product or the service of the firm. And if you are a company, you can use social media to recruit new talents.

However, in spite of all these advantages that social media supply, we often forget to talk about problems, and sometimes dangers concerning them. Publishing information about itself : yes. But what are the limits of the life’s privacy? Then social networking become a threat for users.

The main point is the life’s privacy. Being enrolled in a social media demands to give a certain number of personal information ; name, birth date, address…to create you an account, so your friends can find you and know more about your life. Although you think it’s normal to give such details, your account is, from this moment, public. That means everyone who is on the social network can see most of your information. For example, people might even be destroying your credit rating or attempting to access your e-mail or financial information if they have access to some information.

Now let’s take the example of Facebook. If you want to have an account on it, Facebook demands you to sign a “contract”. First, you just give personal information to create your account. But then, you have to tick a case which is followed by “I accept all terms and conditions…”. People often never have a look on the terms of the deal. In fact, it is said that all the information you will post on Facebook (on your profile page) belong to Facebook’s property. That means pictures, videos and all details of your life are stocked in Facebook’s data. Then, Facebook can do everything with them because thanks or because of the authorisation you gave them.

This leads to the second point : the spread of you life’s privacy beyond the social network. Sometimes, you don’t pay attention to what you post on your Facebook profile. You post pictures of your parties, sometimes shocking (drugs, alcohol…) and think you can impede others persons to see your profile, like your employers, teachers and so on. Withal, you are trapped because Facebook can do everything it want with your information, even selling them to firms or to newspaper if they pay for it.

In 2008, Kelvin Colvin was fired because of a picture he post on Facebook, saying he was at a Halloween party, in Worcester, whereas he said few days earlier to his boss he had to go to New York for a family problem. Someone this young guy had in friend on Facebook sent the picture to all the employees who worked in the same firm as him. Kelvin was immediately redundant.

To finish with, social networking can be extremely addictive. You always want to know about your friend’s life, to see who is connected to talk to by chat, what people say about you…Your life is not real anymore. It is virtual. You spend more time with your computer or with your mobile phone than with your family or friends, always aware and checking about news.

Trying to struggle against wrongdoing of social media, and in particularly Facebook, a lot of advertising campaigns have been created : blogs, websites, pictures and so on. The goal is not to prevent you from joining a social network, but to aware you of dangers which can harm your private life. Even parents try to aware their children.

To conclude, we can say that social media have experienced a huge growth during the past few years. From MySpace to Facebook, users keep looking for new ways to express themselves on the web, trying to find out how to create their own network, composed by friends, music, pictures and so on. Social media don’t require a payment, but only an inscription for free, which leads to an increase of members every year, and consequently, an increase of the popularity of all social networking.

Nevertheless, users don’t always realise the danger of social media. Exposing their private lives to the public, they reveal personal information that can be used against them (account hacking). In addition to, users never pay attention to the terms and conditions of the inscription, and they just sign the contract. Therefore, once they have signed, all of their privet lives are in the hand of social media.

Consequences are, most of the time, worse than they are expected to. It can be a simple account hacking, as a spread of some parts of your life outside the network. To sum up, this can destroy your own circle, your career, and even you.

Young generation is the most vulnerable target, because young people are often unconscious, and think it doesn’t matter to give personal information on the web. However, we all have to protect our privet lives, by paying attention to dangers of social media. That doesn’t mean we are not allowed to use them. If they didn’t exist, life’s people would be boring. And currently, the human is always trying to find new technologies to satisfy his needs…

Also read the short essay on Facebook and students

The risks and benefits of Facebook and social media. (2020, Jun 02). Retrieved from https://studymoose.com/risks-benefits-facebook-social-media-new-essay 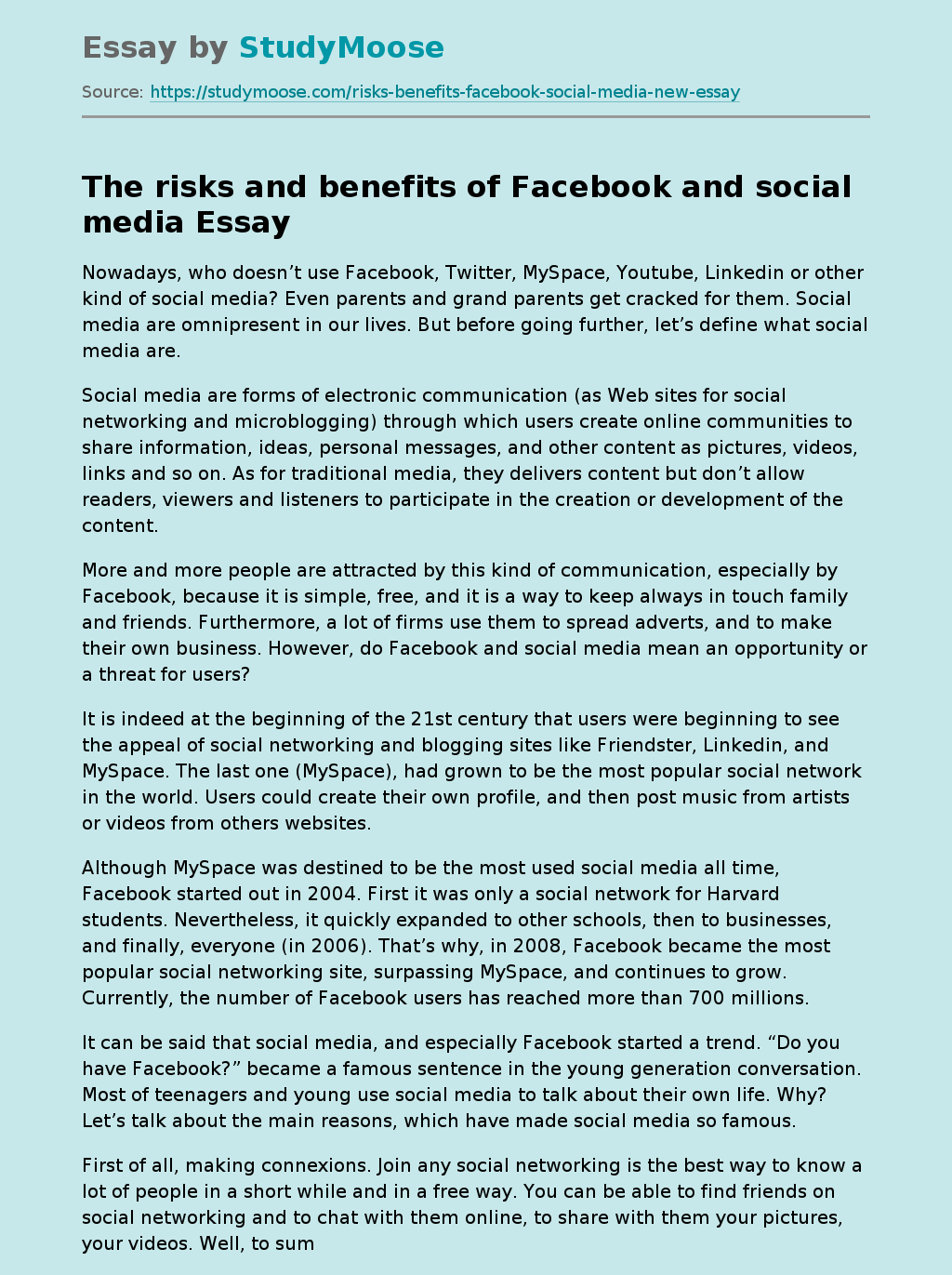