Turn in your highest-quality paper
Get a qualified writer to help you with
“ Risk Concerns in Adventure Tourism ”
Get high-quality paper
NEW! AI matching with writer

For instance, tourists are often prone to physical injuries, attack by wild animals and any other forms of injuries in the wilderness where they normally carry out their adventures. This essay seeks to identify some of the commonest concerns in adventure tourism.

Leach (2008) acknowledges that adventure tourism is the only type of tourism where the people involved are prone to an array of risks. Ideally, adventure tourism is characterized by contact with wild nature without using any conventional technologies that can help in preventing any possible precedents.

In adventure tourism, the tourists must engage in physical activities that might be tiresome and injurious. For instance, many adventure tourists may choose to use boats and canoes on rivers. Such rivers normally flow fast. The rivers may also have dangerous wild animals such as crocodiles. The use of unconventional methods of transport such as canoes and boats is very common in adventure tourism.

Adventure tourists normally do not have ideas of the places they visit.

They usually go on tours without guides. Leach (2008) gives an account of a young boy who lost his life on adventure tour. One of the reasons why most people lose their lives on adventure tourism is because they do not strategize for the tour. Adventurers normally have confidence and valor to confront the challenging environmental factors that might harm tourists. In addition, adventurers are usually interested in learning newer features despite the dangers that might be involved.

Many adventure tourists do not go on tours under leadership. This one aspect makes adventure tourism risky. Tourists may not be aware of several factors that might affect their safety during adventure. Leach (2008) gives an account of how a boy who went for an outdoor trial without the company of anyone died. Although there were criticisms on the report, many cases of death have occurred among adventure tourisms. Most adventurers normally use ‘Kayak’ on rivers in the wilderness. Such vessels are normally prone to the effects of wind that might easily overturn them. While using such vessels, tourists make themselves vulnerable to the dangers in the wilderness.

On the other hand, some adventurers may face dangers of exploitation by their counterparts. Ideally, The Adventure Travel Trade Association (ATTA), (n.d.) confirms that there is need to protect the children from the possible exploitation during adventures. Many children who go on adventure are at higher risks of being exploited by their touring counterparts or by any other adventurers. A few children have faced the dangers of rape and injuries during adventures. This happens because people who normally go on adventures fail to ensure security during the tours. On the other hand, there is less concern given to children during travelling. Sexual exploitation is a common event during adventure tourism. The Adventure Travel Trade Association (ATTA), (n.d) proposes that children at risks should be given proper protection during such adventures. There is need for protecting individuals who go out on adventures especially in high-risk areas. Many adventurers are prone to attack by wild animals in various wild environments. In addition, adventurers may be subjected to severe physical injuries and even death during adventures. Due to this, there is significance in preventing such risks.

During adventure tourism, loss is considered inevitable. Loss prevention is therefore considered as a vital initiative for the adventurers. Loss prevention may include reducing contact with the hazard. Adventurers may identify parts of the forests or wilderness that have much danger. This can help them in avoiding contact with danger during their tour. Loss reduction may also help in dealing with risk concerns in adventure tourism. With the help of guides, adventurers may outline the extent of participation in dangerous activities. Leaders may help in reducing inappropriate actions that might affect the safety of the tourists (Kennedy, 2014).

According to Korstanje (2009), there is too much risk involved in pleasure travel. Many adventurers find it interesting to tour places where there are many risk factors. Although, the writer also acknowledges that many people do not understand the difference between risks and threats. With varied definition of risks, the article demonstrates how tourists and adventurers are prone to severe risks that might affect the lives of adventurers. Conversely, adventure tourisms have many risks as compared to other forms of tourism.

Although some of the risks may not be open to adventurers, adventure tourism is characterized by many risks and dangers. As individuals find pleasure in exploring new things, they subject themselves to possibilities of risks. Although not all adventures are full of risks, it is important to note that most activities involved in adventure tourism predispose the tourists to serious dangers. Overall, adventure tourism has many risk concerns. 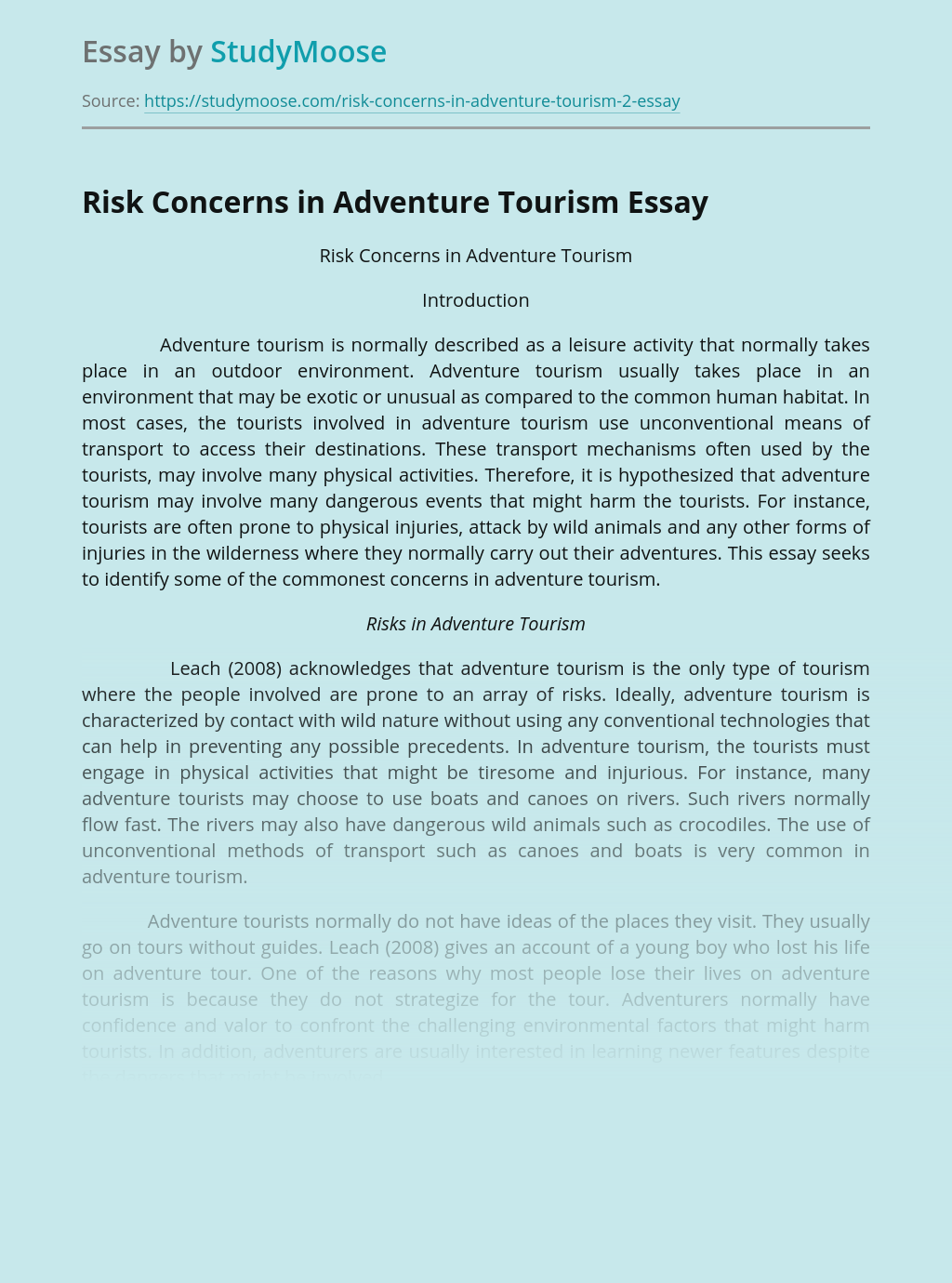 Turn in your highest-quality paper
Get a qualified writer to help you with
“ Risk Concerns in Adventure Tourism ”
Get high-quality paper
Helping students since 2015
Stay Safe, Stay Original