Rise of Tattoos in Todays Society

Tattoos are becoming extremely popular in today’s society. They seem to be everywhere from professional athletes showing them off to even TV shows all about getting tattoos. They are becoming a norm in society or are they already the norm? Are they still considered rebellious? This will all be explored as this literature review will look into the history of tattoos, tattoos on the rise, health risks of tattoos, and why teens go and get tattoos. We will even take a look at a sociological study of the changing significance of tattoos.

Don't use plagiarized sources. Get your custom essay on
“ Rise of Tattoos in Todays Society ”
Get custom paper
NEW! smart matching with writer

Tattoos seem to be on a rapid increase in popularity and a booming industry, that doesn’t seem to be slowing down anytime soon. The article, The History of Tattooing, by Katherine L. Krcmarik a graduate student of Michigan State University, gives a good sense of where tattooing originated from and its history. Tattooing has existed for thousands of years. Tattoos found on Egyptian and Nubian mummies date from about 2000 B.

C. The word tattoo comes from the Tahitian word tattau, which means “to mark.

The first tattoo instruments used were believed to be typically a disk made of clay and red ochre together with sharp bone needles that are inserted into holes in the top of the disk. In the late 1700s, Captain Cook made several trips to the South Pacific. Returning from one of this trips, he brought a heavily tattooed Polynesian named Omai who became a sensation in London. Soon, the upper- class were getting small tattoos in discreet places.

For a short time tattooing became a fad. What kept tattooing from becoming more widespread was its slow and painstaking procedure.

In 1891, Samuel O’Rtiely made the first electric tattooing machine. As the average person could easily get a tattoo, the upper classes turned away from it. By the turn of the century, tattooing had lost a great deal of credibility. Tattooists worked the sleazier sections of town and heavily tattooed people traveled with circuses and “freak Shows. ” The birthplace of the American style tattoo was Chatham Square in New York City. While tattooing was declining in popularity across the country, in Chatham Square in flourished. In the 1920s, with prohibition and then the depression, Chatham Square lost its appeal.

The center for tattoo art moved to Coney Island. Across the country, tattooists opened shops in areas that would support them, mainly cities with military bases close by, particularly naval bases. Tattoos were know as travel markers. You could tell where a person had been by their tattoos. After world war II, tattoos became even less popular by their associations with Marlon Brando type bikers and Juvenile delinquents. Tattooing had little respect in American culture. Then, in 1961 there was an outbreak of hepatitis and tattooing took a big blow. The general population blamed the tattoo parlors.

A health code violation went into effect and the tattoo shops at Times Square and Coney Island were shut down. It was illegal and tattoos had a terrible reputation. In the late 1960s, the attitude towards tattooing changed. Much credit can be given to a guy Lyle Tuttle as he used the media to bring back tattooing by tattooing celebrity women. Today, tattooing is making a strong comeback. It is more popular and accepted than it has ever been. This article did a good job providing a lot of examples and proof of how old tattooing has existed for in this world.

It got its message across that tattooing is not as recent as many people believe and dates all to way to B. C. Overall though it gave a good background on the history of tattoos. It was also nice to see it had a lot of sources. Tattoo Arts in America, is an article by Hoag Levins and it will talk about the rise of tattoos in society. Tattoos have come a long way from being looked at as rebellious to now a trendy fashion statement. Tattoos are seen everywhere in society from celebrities to multiple people on the beach.

Even public leaders have tattoos. Professional athletes have had a lot to do with the acceptance of tattoos now a days. They made them visible, desirable and socially acceptable. Brendan O’Neill is another author who wrote the article, Tattoos were once a sign of rebellion – now they are evidence of craven conformity to cultural norms, and it also talks about so social norms of tattoos. Tattoos are no longer signs of rebellion as they are now symbols of conformism. It is those people who deny to get tattoos who are the true deviants today.

If a deviant is one who “departs from usual or accepted standards”, then it is the non-tattooed, who are exercising deviancy in the 21st century. In Britain, more than a third of 16- to 44-year-olds have tattoos. Now a days you can’t walk down a busy street without seeing people with tattoos and to not be tattooed, to have what is known as “virgin skin”, is to go against the mainstream, and to reject body art is to rebel. These articles did a good job at summing up the gaining popularity of tattoos in today’s society and how the are a part of the main stream.

This is real helpfully for someone to know who might have been nervous to get a tattoo because they thought they were going to be casted away of society but really they will accepted for their actions. So now let’s take a look at the gaining popularity tattoos are getting. With tattoos becoming so popular is there a health risk associated with getting tattoos we should know about. The article, Tattoos- Health Risks and Toxic Effects, gives a good insight of the dangers that could come from getting a tattoo. There is a lot of things that can go wrong from getting a tattoo.

Infections such as HIV and hepatitis can be caught from reused needles. Allergic reactions to temporary and permanent tattoo inks. Scarring may occur with getting a tattoo, or tattoo removal. Granulomas in the form of large or small bumps that form to encapsulate foreign substances, such as tattoo ink particles. Metal salts in tattoo pigment can cause burning and pain during MRI procedures. Some facilities are refusing to perform MRIs on clients with tattoos. Skin cancers have occurred within the boundaries of tattoos, and gone unnoticed until they began to extend beyond the boundaries of the tattoo.

Nearly 40% of organic pigments used in tattoos are not approved even for cosmetic topical use. Almost 20% of pigments were cancer causing aromatic amines. Tattoo inks travel in the body. Black tattoo pigments have been found in lymph nodes. Further, these pigments look like metastases in the nodes, complicating the evaluation of cancer status. This article was good because it gives you all the information you should know about the health risks of getting a tattoo. Most people probably don’t know most of that information and its good for them to know it if they were ever considering a tattoo.

But why are so many teens starting to get tattoos? The article, teenagers and tattoos, will give us a good insight on why teens go and get tattoos. Teens do so as they want to make their own fashion statement or simply declare a personal mission. Parents, on the other hand, agonize over their teenagers and tattoos but there sons and daughters insist on having their own way because they feel strongly about their bodies and want to decide what they want to do with their bodies. During Adolescent’s development, teens are searching for a specific identity and that’s one of the main reasons they o and get tattoos. They want to be unique and their own person. Tattoos give them a sense of control and an outlet for individual expression. They are a solution for many of the identity crises. Adolescents can support their efforts at autonomy, privacy, and insulation through this. This article gave a good perspective of why teenagers go and get tattoos. It was straight to the point and didn’t go on about pointless stuff as a lot of the articles I found on this topic did. Tattoos are clearly becoming a huge part of our society today.

They have so much meaning to people today as they are looked at as fine pieces of art and can represent and be in memory of a lost loved one in your life. They are definitely not looked at as rebellious anymore as they used to be. The only topic though that I believe needs some more research is tattoos and jobs. Are bosses today still really critical of people with tattoos and immediately judge them and not give them a job? But I can say its save to say that tattoo’s are here to stay and aren’t going to fad out of the main stream anytime soon.

Rise of Tattoos in Todays Society. (2016, Oct 23). Retrieved from https://studymoose.com/rise-of-tattoos-in-todays-society-essay 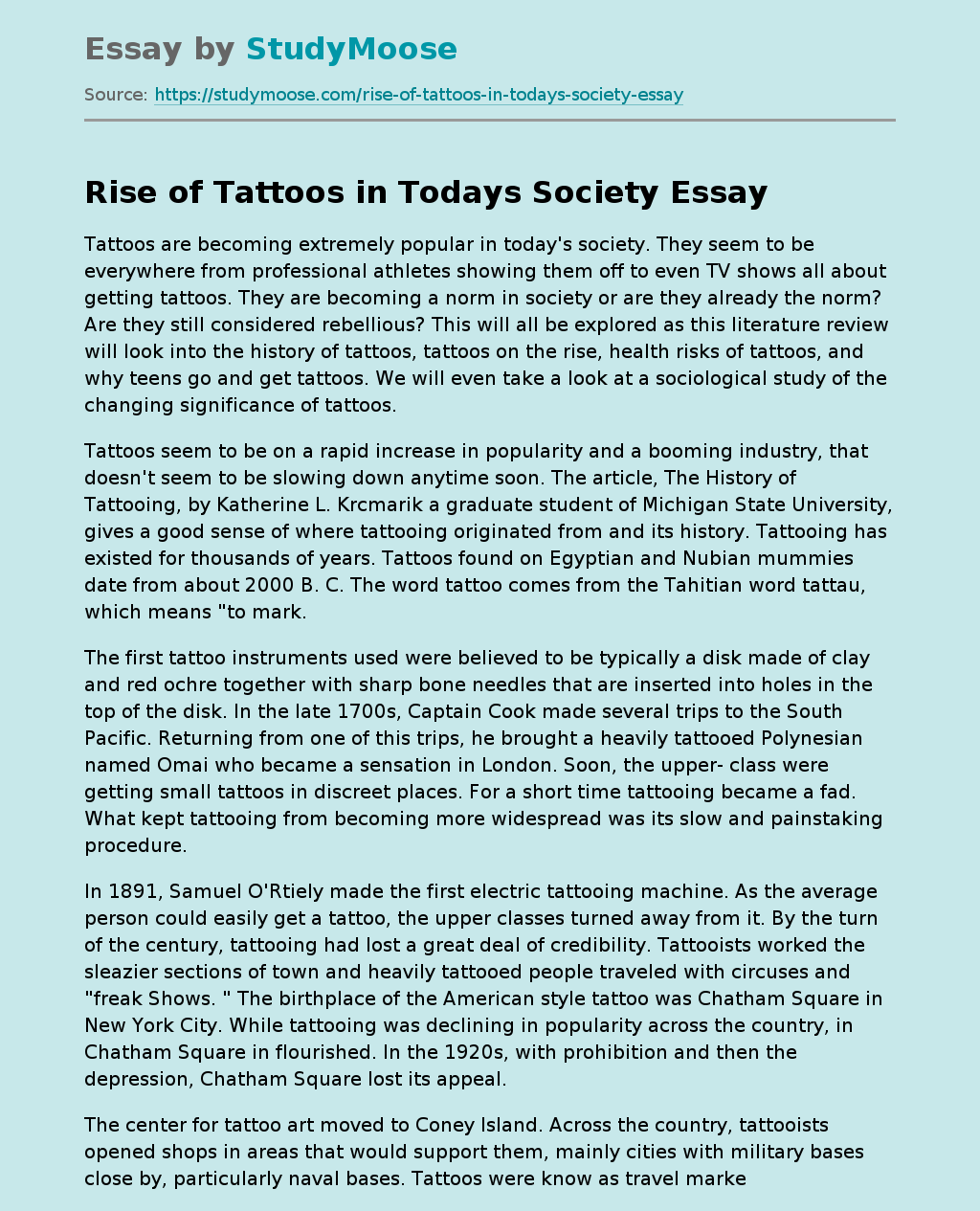