Many years ago, India’s pharmaceutical industry was suffering from number of international trade limits due to their violation of intellectual property rights. The Indian companies used to copy patents of drugs made by Western countries and Japan with no responsibility to property rights. This would discourage international investors from investing into India’s drug industry. India was only good for making generic brand drugs because the patents for those drugs were already expired. However, the situation has changed dramatically in recent years due to the rising demand for international trade.

Don't use plagiarized sources.
Get Your Custom Essay on Rise of India’s Drug Industry Just from $13,9/Page

Especially, with the induction of India into WTO in 2005, there came the appreciation and protection for property rights. India stopped making those counterfeit drugs. The fact that India is a member of WTO has eased the path for foreign investors to start investing into India’s many industries including drug industry. Due to flow of investments and Western cooperation, India’s pharmaceutical industry has seen unprecedented growth since 2005. According to the case, by 2011, the industry reached .

There are number of factors that have contributed towards this phenomenal growth in the drug industry. The initial event that initiated the growth was India’s agreement with WTO which gave protection to intellectual property rights and assurance to international investors. Also, there are several internal factors within India which have successfully contributed to the growth of the industry. Similar to China, India has comparative advantage in manufacturing and packaging which encouraged Western companies to outsource in India.

The comparative advantage has been gained due to abundance of educated work force, low wage rates and the wide spread use of English as a business language. This latter factor, the wide use of English language is one of the main reasons why Western companies chose India over China. For foreign investors, it is much easier to conduct business in English than other languages. Furthermore, India’s the know-how knowledge of dealing with regulatory agencies of United States and European Union developed from the early ages of the industry has attracted even more foreign companies.

Along with external investors, international regulatory agencies also welcomed the joining of India to the global supply of pharmaceuticals. For example, the FDA of USA has opened two offices in India to properly and timely oversee the manufacturing processes and keep an eye on safety issues involved with manufacturing. Due to this, FDA has given approvals to producing drugs for sale in the USA to about 900 Indian companies. The rise of India’s drug industry has a trickle-down effect to many aspects of India political, economic and social life.

Local start-ups were inspired by the growth and further invested in the industry by establishing facilities to discover and produce pharmaceuticals. With so much demand for India’s drugs from around the world, the country started to feel the need for pharmaceutical talents. In turn, this drove many Indian universities to expand their pharmaceutical programs to prepare more young pharmaceutical professionals. In this industry transformation, there are certainly more winners than losers. I can almost argue that there are essentially no losers in the transformation.

In the past, the industry was only good for producing generic brands which had obsolete patents. Nowadays, the production of generic brands has not stopped but expanded even more. So, there are no losers in the realm of generic brand producers. On the other hand, there are internal and external winners due to this transformation. The internal winners are India and its people. With the growth in the drug industry, there were thousands of jobs created for Indians. The government was collecting more revenue which is later used to pump into suffering industries.

The external winners, the international community and its investors have also positively gained from the transition. For US and Western enterprises, India was a perfect relief from intense domestic health care regulation and compliances which have raised the cost of producing drugs at home. Producing the drugs in India has secured high profit margins for foreign companies by taking advantage of low labor costs. Furthermore, cheaper production of drugs in India means cheaper cost of health care for the people of the United States.

Overall, the benefits of the rise of India’s drug industry significantly outweigh the disadvantages. There are number of things I have learned from this case. Firstly, I learned that signing agreement with WTO has significant advantages to the member countries. Initially, I would think that the agreement would partially hurt local economy due to rise of cheaper exported similar goods. However, as I learned from India’s case that the agreement has trickle-down effect which can easily outweigh the damage it may cause.

Secondly, I learned that there are still opportunities to consider in India’s pharmaceutical industry. In the future, I can find an Indian partner who is in the business of pharmaceutical industry and form a partnership between me and him. That way, I could open a branch of the Indian drug manufacturer in Uzbekistan. There is a huge demand for pharmaceuticals in Uzbekistan and the supply is not sufficient thus leading to high prices. I could take advantage of this and become successful businessman. 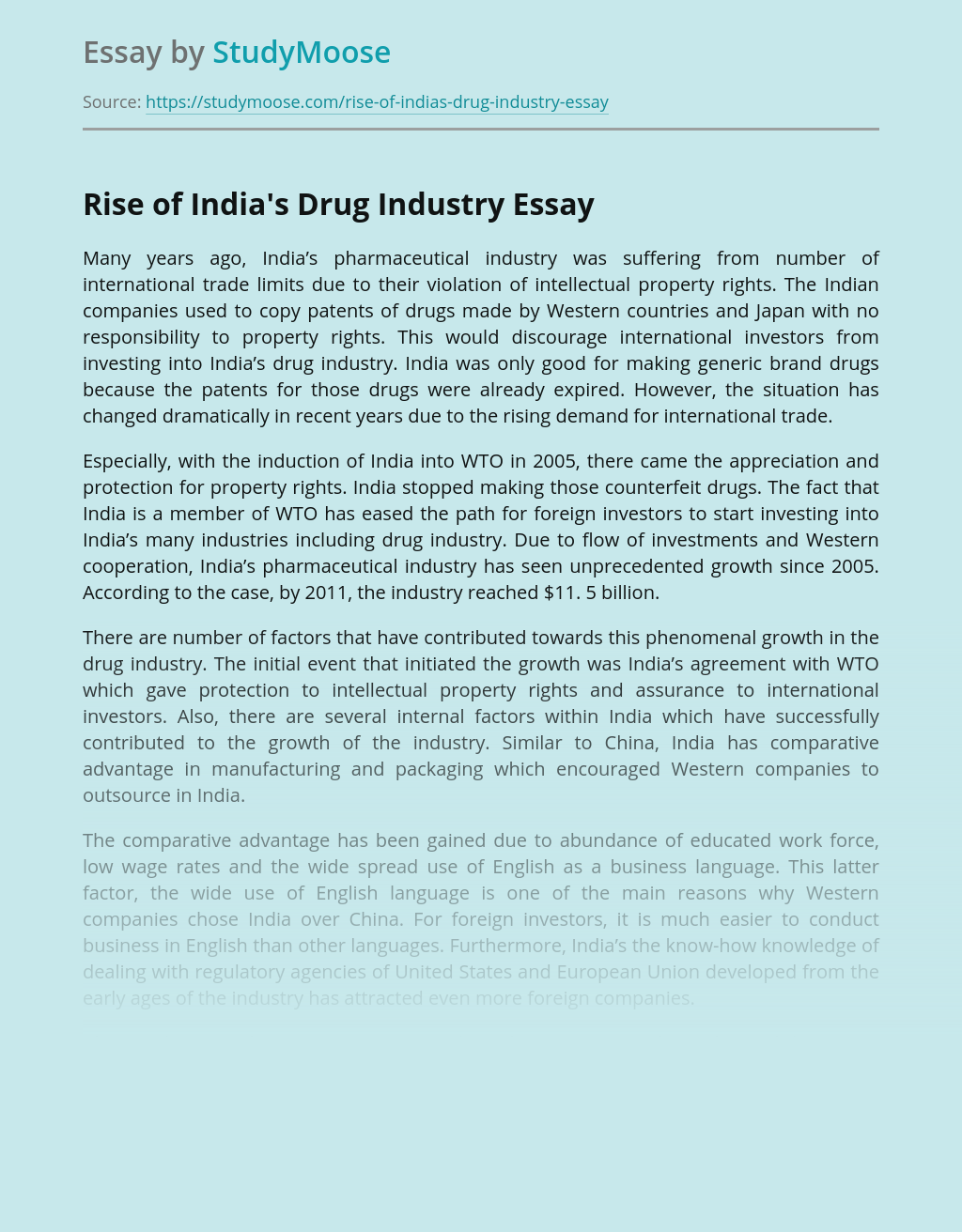 Illicit Drug Use during Pregnancy

Drug exploitation in pregnancy is an elaborate public health problem with conceivably serious conflicting effects for the mother, the fetus and spreading to the developing child. When a mother becomes pregnant, it is important to her baby’s health that she has a healthy lifestyle. This includes eating plenty of nourishing foods, getting a decent amount...

Get Essay
Effects of Drug Abuse and Addiction

This paper will illustrate several aspects of how drugs affect our lives. Addiction philosophies including the psychology and physiology will be explained in an attempt to describe how drugs affect our bodies both physically and mentally. Secondly, different drug categories types will be covered including: stimulants, depressants, narcotics, hallucinogens, and cannabis. Each of these categories...

A company like Teva Pharmaceuticals is subject to all of the factors of the external environment given the nature of its business and global expansion. Pharmaceuticals is an industry where high profits can be achieved, but it is also an extremely challenging business when one considers all of the political/legal aspects involving government regulation and...

The Biopsychosocial Model of Addiction is easily the model that appeals to me most. This model states that addiction is the result of multiple, interacting variables, the strength of which vary between individuals. When I was observing each of the models, I found myself agreeing with two or three of the different standpoints from which...