Riordan Manufacturing, Inc. (Riordan) is a publically held corporation established in 1992, specializing in the manufacturing of plastic injection molding with facilities in California, Michigan, Georgia, and China. In 2000, the company expanded the manufacturing operations to China. Financial reports (Appendix A and B) for the fiscal years 2004 and 2005 depict the financial position of the company. Ratios calculated from Riordan’s financial statements provide an assessment of financial condition and performance. The following ratios using Riordan’s financial statements will be calculated and discussed: 1) liquidity ratios; 2) activity ratios; 3) leverage ratios; 4) profitability ratios; and 5) average P/E.

Current ratio is a Solvency Ratio and according to Leichter (2007) “expresses the working capital relationship of current assets to cover current liabilities”. Leichter (2007), states that “a ratio of 2 to 1 is considered a sign of good financial condition.” The following table provides a comparison of Riordan’s current ratio for 2004 and 2005: 2005 Ratio2004 Ratio

429 and in 2005 the current ratio improved to 2.087. The increase in this ratio provides information to creditors and investors that Riordan is able to pay current liabilities and financially stable.

Table 2: Accounts Receivable Turnover Ratio
The accounts receivable (A/R) turnover ratio according to The Free Dictionary (2008) reflects “the number of times in each accounting period that a firm converts credit sales into cash. A high turnover indicates effective granting of credit and collection from customers.” The following table provides a comparison of Riordan’s A/R ratio for 2004 and 2005: 2005 2004

The debt ratio according to Investopedia (2008) “indicates what proportion of debt a company has relative to assets. The measure gives an idea to the leverage of the company along with the potential risks the company faces in terms of its debt-load.” Debt Ratio = Total Liabilities divided by Total Assets. Riordan’s debt ratio increased from 2004 to 2005 by .001 which indicates a slight increase in debt relative to assets. 2005 2004

AVERAGE P/E FOR THE MANUFACTURING INDUSTRY

Conclusion
The Rubber and Plastics Manufactures’ P/E is 8.6 indicating a desirable industry for investors. From 2004 to 2005 Riordan has experienced a marginal decline in Assets but is able to pay liabilities according to the Current Ratio, but the Gross Profit margin declined. The Debit Ratio slightly decreased, but the Account Receivables turnover increased meaning the company is effectively collecting on accounts. The company is successful in maintaining asset value, collecting accounts, and paying liabilities, but should increase the profit from sales by reducing expenses and developing efficient processes. 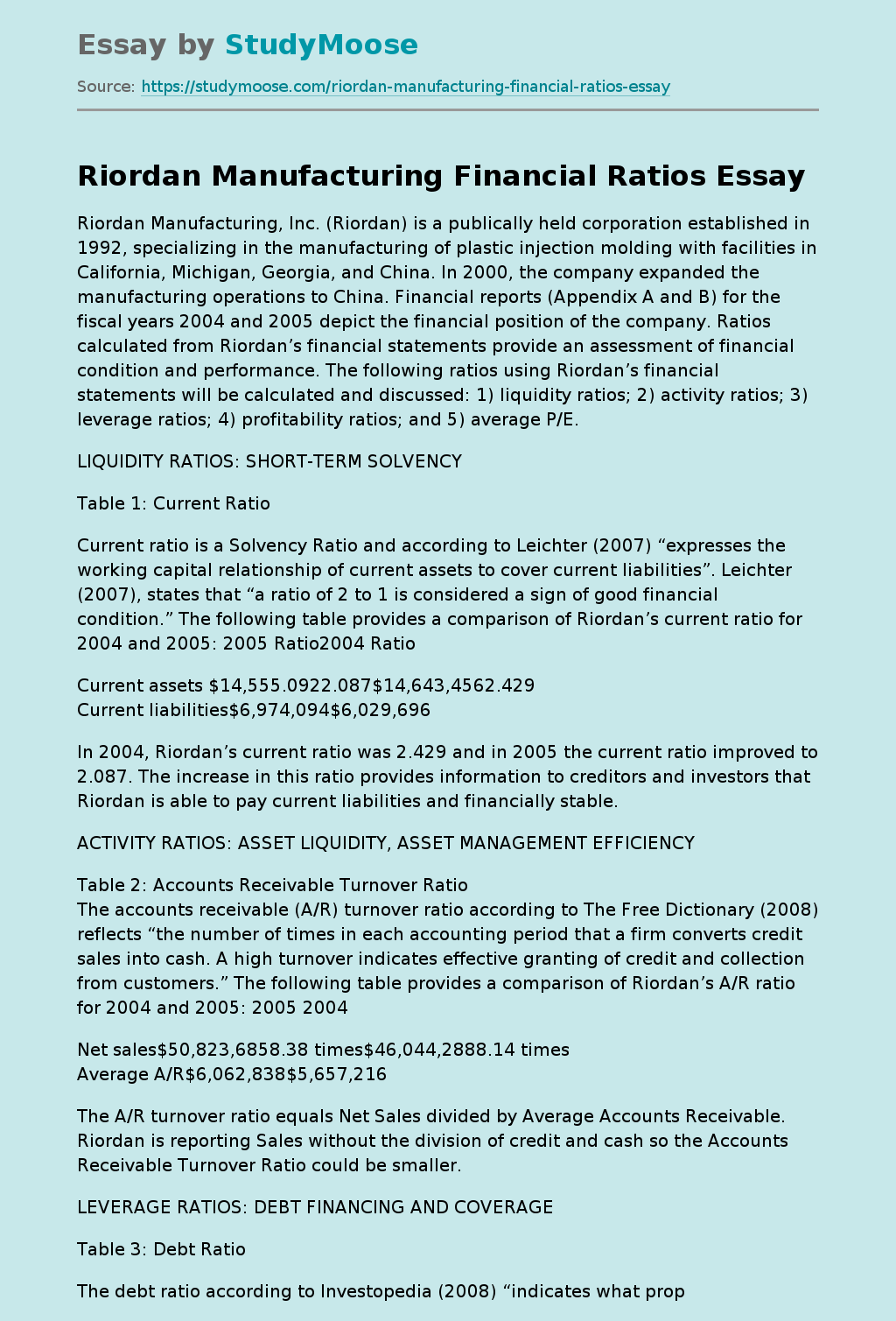