Being at the right place, time, and uniform displays discipline and supports the team. The consequences are more significant than the rewards. It can either make everything very simple, smooth, and efficient when you fulfill your duties. It will hinder, and remove other soldiers from a mission when one fails to uphold their responsibilities. The responsibility of attendance and proper attire is not difficult nor complicated. Communication is also a key part that supports the efficiency of the two. It is the responsibility of a soldier to ensure they are adhering to their leaders guidance.

Being in the right place, time, and uniform displays multiple things. It shows that the communication between the soldiers are clear and precise. It portrays lack of confusion and effective teamwork in regards to communication. Proper uniform encourages shows professionalism, and pride in the uniform along with what it represents. When a soldier has carried out their duties thus far, it gives the team reason to believe the soldier is worthy of their trust.

Over time, there will be a trust built between the team. Trust is crucial for a team as they carry out their missions. A team lear looks at a soldier and takes this into account when they have to decide when to depend, support, task, or promote a soldier out to do a mission. Right place, time, and uniform is a fundamental skill that anyone can learn. It is an individual responsibility. It is up to the soldier to practice this on a daily bases until it is inculcated into second nature.

Communication is key. When a soldier fails to be at the right place, time, and uniform, it causes to influx the rhythm of the team. It’s the NCO’s responsibility to influence, guide, train, mentor, and most of all, take care of a soldier. When a soldier is not at the right place and time, it show lack of discipline, and it can be perceived that the NCO’s are failing at their job. If a soldier fails to inform their chain of command of where they are prior to a formation, that soldier then made their chain of command unable to perform their duties. Without communication, the chain of command can not advocate that the soldier is okay. A NCO’s can not be accountable without communication with a soldier. Anytime a soldier is not in proper uniform, the NCO over the soldier has to answer for the soldier’s actions. Once in a while, simple mistakes happen. However, when a soldier has repeatedly shown lack of concern, urgency, care, pride, respect for his team, there has to be action.

the NCO core is the backbone of the military. Their soul responsibility is to take care of the soldiers. In every way possible, the NCO is suppose to guide, train mold, influence you to being the best soldier of the United States Army. Nevertheless, a NCO is still a soldier. A soldier is still a human. A human is still subject to basic human necessities. A human needs sleep, food, exercise, companionship, and someone for guidance. Whether it be religion or a fellow comrade. Every human needs to have time to take care of business for both inside and outside of the military. Soldiers to this day still have wives, children, family, friends, obligations both in and out of the military, and always will. When a soldier shows up at the right place, time, and uniform, the mission can continue and have good potential for the team to go attend their other obligations. When a soldier doesn’t arrive at the right place, time, and or uniform, it takes away from the team’s opportunity to address their other obligations..

Situational awareness is a key point in the military. Time is something that can not be given back and can be very sensitive to most, if not all, missions. The military stands by its word when we say we are all family in the military. This also includes spouses, dependents, and anyone military affiliated. We take care of our own. When a soldier takes time away from their team, that time is taken away from everyone included and involved with that soldier’s chain of command. This is the same time you can not give back to a soldier’s wife when they miss their anniversary because his soldier decided to wear civilians to staff duty because he doesn’t have any clean acu’s. Time you can not give back to a soldier’s son when he played his first game on a sport team because his soldier went to shreveport instead of funeral detail. Time you can not return to a soldier’s daughter when she wakes up from a nightmare and the soldier is not there because he has to go to the barracks because his soldier wasn’t in his room while cooking and it burned his entire room. A simple skill of right place, time, and uniform is more crucial than one may think.

A soldier that does not show that they can be dependent on needs to be addressed or removed. Being that failure to be at the appropriate place of duty is under article 92 failure to report. This can also be court martial causing a dishonorable discharging. This can potentially end up with very negative results, preventing a soldier from any educational benefits and high difficulty finding a job in the civilian world. There is no room within a team for distrust. Again, right place, time, and uniform gives hope that there is potential that a soldier can be trusted to fulfill their obligations. It gives the chain of command some faith that the soldier can be reliable, dependable, independent, resourceful, and resilient. With these characteristics, any soldier can be a high quality soldier with great success. It also brings good light to their leadership as due. For Ultimately it may be only attendance and uniform to a private. It is the perception of potential to being highly professional, perficient, effective soldier and/or team. It is up to that soldier to fulfill the perception with action.

In conclusion, it is highly important to be at the right place, at the right time, in the right uniform because of what it represents and the positive attention it can attract to yourself and chain of command. Most importantly, each soldier is a part of a team. A team needs trust, reliability, and integrity (doing the right thing when noone is looking). A team is only as good as its weakest, trust worthy as its most unreliable, successful as its laziest. If a soldier shows incapable of being a part of a team, the soldier should not be a part of the military. Everything we do is a team effort. Attendance is everything. Being at your place of duty is one of few core responsibilities a soldier has. As a member of a team, I am counted upon by my fellow teammates to be where I am suppose to be at the time I am supposed to be there. Everytime I fail to be at my place of duty, I fail my teammate. Along with the mission, I risk the success of my battle buddies to my left and my right. I not only put myself at risk, I also put my team at risk. I leave not accountability for my team leader putting his job at risk. I also, show lack of discipline. I show lack of morale of self respect and mutual respect. It can be perceived as selfish and a buddy fucker.

The army does a lot time to take care of personal problems, responsibilities, obligations, and issues that arrives both sudden and unsudden. Anytime that a soldier does not show to his place of duty without any communication nor warning, it is the first line supervisor’s responsibility to answer for it. It is also the unit’s responsibility to ensure that the soldier is physically and mentally healthy. The NCO’s responsibility is to take care of the soldiers. this can be very simple or immensely difficult. All dependent on the NCO and soldier. If a soldier is deliberately not doing their part and fail to report due to lack of discipline, then it is up to the soldier to take the guidance of his leadership. a constant failure to report lack of discipline and a sign that a soldier has lost sight of their responsibility and needs to be redirected. every time a soldier doesn’t show it takes away time for the first line supervisor to accomplish his job, family, friends, personal time, personal issues, wife, and work.

One person late put more than just that one person behind. Showing up on time is very important not for just the soldier but for the unit. A soldier that is always on time with the proper uniform accomplishing his duties at the standard and or above will show good likes for his unit and him or herself. A soldier that is always late, never informing his leadership causing them to be less effective at their job, not performing at the standard, and always has something going on but doesn’t adhere to the leaderships guidance poses a threat to himself, his leadership, unit and ultimately the army. 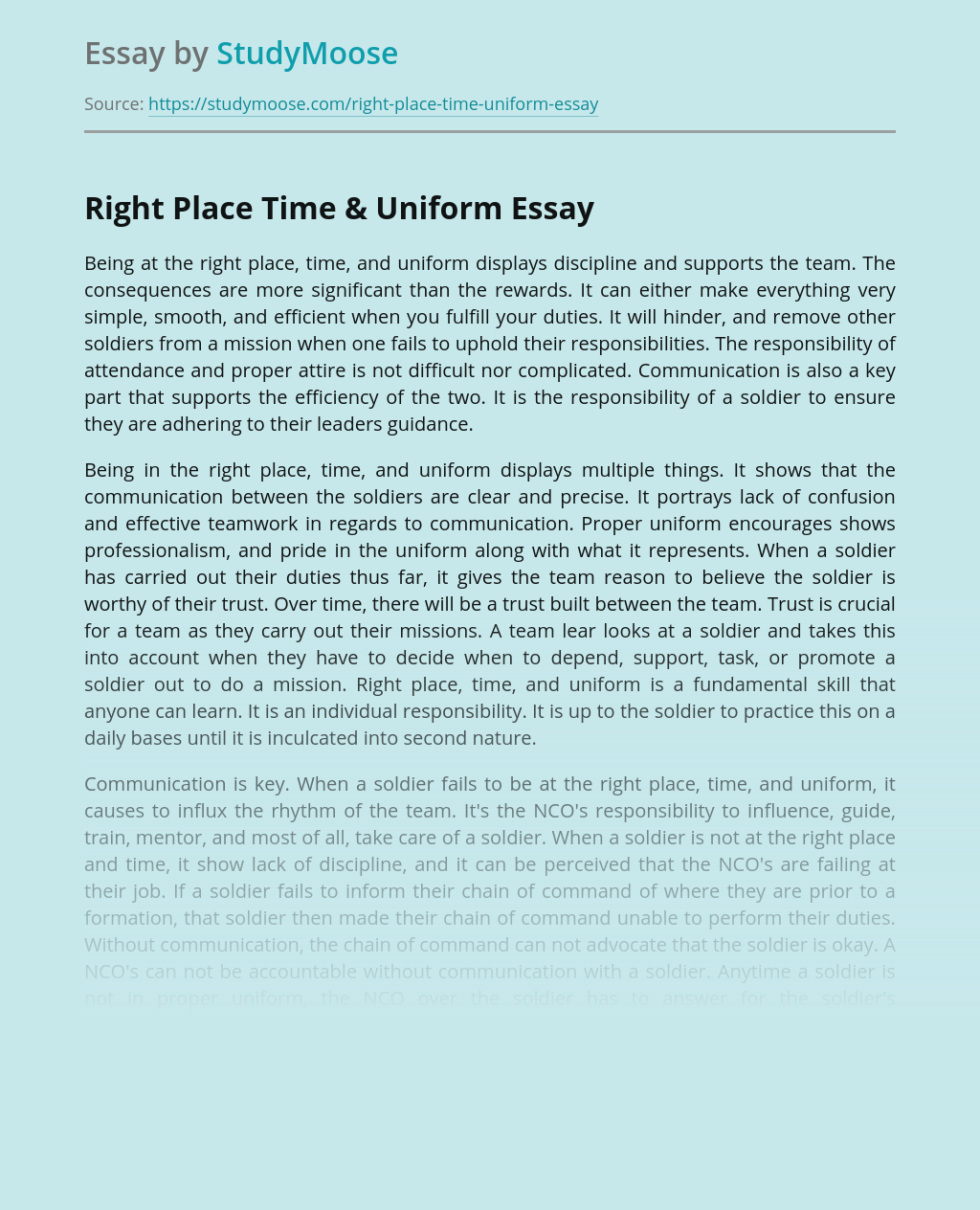