Rifleman Dodd was an interesting book that’s telling a story of a soldier that gets separated from his fellow brothers and sisters during a battle in the 1800’s. This book describes everything about Matthew Dodd and the things he went through to return back to the fight. While on this journey, Dodd ran into several problems. I’d say the big challenges that he faced were starvation, fatigue and a Portuguese boy that he met along the way. With the challenge of starvation being in a battle is a very serious problem because it’s a big effect on how he could react once in the face of danger.

Don't use plagiarized sources.
Get Your Custom Essay on Rifleman Dodd Interesting Book Just from $13,9/Page

Having a much disciplined diet on his journey helped to obtain the energy he needed to stay in the fight.

While firefights and starvation weren’t on Dodd’s side, he also faced fatigue. This affect is hard on others health, but while Dodd had one thing set in mind he was able to look past himself and still continue in the fight. He showed many different ways and tactics in his advantage to help push around the fatigue stage. Once was said by another soldier that Dodd would sleep with his back up against something, still having his pack on and his rifle in his hand just in case he need to jump right back into the battle to help save himself and others. He was known for a smart individual and very determined soldier for his comrades. His ultimate idea was to go out and fight and always return to his unit with is fellow brothers and sisters.

Matthew Dodd had a reputation for himself with the French and was known as the green shirted one. Most of the riflemen wore red but Dodd made himself out from the others. His skillful and talented ways with his rifle gave him the advantage with the French who carried muskets. The French were so scared of him that they had silver bullets melted down and made. They wanted Matthew Dodd killed and he earned the nickname “devil”. He had organized large groups of Portuguese peasants to harass the French, kill Frenchmen, making them starve and torturing them with a disease. Dodd only had one thing in mind and that was his place of duty.

One of the big pictures in this book was given with the efforts of Matthew Dodd and his great tactics to pursue the French. I believe this book can give readers a great perspective of what Dodd and you can do to achieve goals in life, also pushing the reader to the overall effects of his actions to contribute to the war and his unit. It’s ironic on how one man can make such an impression and effect on different nations just by having the courage getting the job done no matter what the cause. 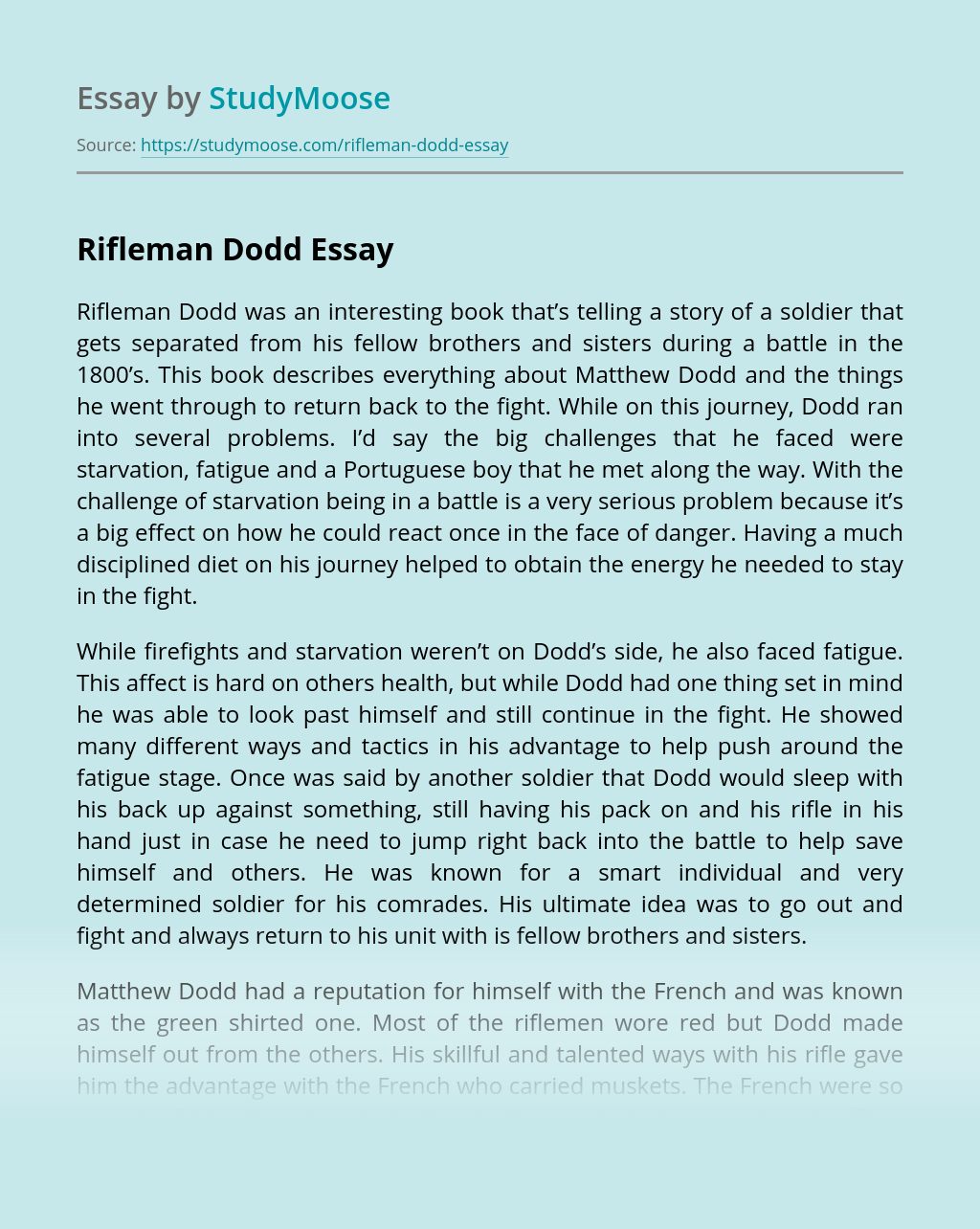 Romeo and Juliet - The Prologue and ACT I - SG

Shakespeare uses a prologue to inform the audience that _____. The lovers from the feuding families will die The fight in Scene I starts when ____. Capulet and Montague servants quarreled over petty insults Adjectives that describe the character of Tybalt are ____. Saucy and hotheaded When Benvolio talks with Romeo, he finds his cousin...

This paper will discuss the technology used in policing and how technology enhances or detracts from police organizations’ ability to function. Then, I would like to discuss the examples of less-than-lethal weapons and how less-than-lethal weapons affect policing in today’s society In addition, example of dangers faced by police and how police organizations address these...

Get Essay
How Did Ducati Become 2nd most profitable Motorcycle maker

2. How did Ducati become the second most profitable motorcycle maker in the world despite its small scale? Platform Approach: Ducati divided the bike into a small number of component and sub-component assemblies. A supplier was responsible for managing and delivering the component. The platform approach minimizes detailed, multi-step assembly processes. Consequently, fewer Ducati man-hours...

Reflection Paper North of Manila, the island of Luzon tempted me with some wonderful mountainous areas, volcanic landscapes and a beautiful coastline dotted with heavenly beaches. Heading up the west coast from Subic, the Zambales coast amazed me being dotted with laidback resorts, while the Hundred Islands , as they say, a favourite weekend trip...

Was the Character and Influence of Anne Boleyn the main reason for the English Reformation?