Who can forget the fires blazing over local buildings during the Los Angeles Riots? Unfortunately the whole event does not seem as if it was too far off in the past. Although today we live in a nation, which has abolished slavery, the gap between the whites and the blacks during the early stages of America’s development has plainly carried into the present. In Native Son, author Richard Wright illustrates this racial gap, in addition to demonstrating how white oppression upon blacks is capable of producing revengeful individuals, not to mention being an immoral act in itself.

Bigger Thomas is one of those individuals, who discovers his capacity to rebel through acts of murder against the white society, which has for long oppressed his family, friends, and himself.

By tracing Bigger’s psyche from before the murder of Mary Dalton, into the third book of the novel, and into the subconscious depths of the final scene, the development of Bigger’s self realization becomes evident.

An entire period of Bigger’s life, up until the murder of Mary Dalton, portrays him under a form of slavery, where the white society governs his state of being. While he worked for the Daltons, “his courage to live depended upon how successfully his fear was hidden from his consciousness”(44), and hate also builds on top of this fear. Once he is in contact with Mary, his fears and hate pour out in a rebellious act of murder, because to Bigger Mary symbolizes the white oppression.

In addition, he committed the act, “because it had made him feel free for the first time in his life”(255). At last he feels he is in control of his actions and mentality. He rebels against the burden of the white man’s torment. He had “been scared and mad all . . . [his] life”(328), until he killed Mary. After this, he was not scared of anyone, anymore. Thus, the murder of Mary Dalton serves as a turning point in Bigger’s life, for it breaks him free of subservience to anyone other than himself, and it is the initial stage in creating an identity for himself.

Book three of the novel offers an emotional confusion within the mind of Bigger, which soon leads him to contrive a self-realization. Immediately one observes that “toward no one in the world did he (Bigger) feel any fear now”(254). This is a recent change in Bigger’s mind set. He knows that he has pushed himself to the limits, and he is in control of what he says and does. He tries firmly to “stifle all feeling in him[self]”(262) when talking to his visitors in the jail, because he feared that they “would make him feel remorseful”(262). In this manner, he is able to not confuse his thoughts with any feelings, so he can sort out his ideas. This is the self-isolating process, which occurs mentally, and this enables Bigger to formulate a justification for his sins. “Men do not like to feel that they are guilty of wrong, and if you make them feel guilt, they will try desperately to justify it on any grounds”(360), which is precisely what Bigger is attempting through mental detachment. Bigger “didn’t know I (he) was really alive in this world until”(392) he killed Mary Dalton.

Bigger realizes that he committed the murders in order to establish his existence in this world. Wright utilizes this perception to elevate Bigger to the stature of a tragic hero. In addition, he also uses the argument that Bigger is a victim of his environment to achieve the same status. Therefore, a mass of confusion leads Bigger to realize that he only wanted to be a somebody in this world. Furthermore, the final scene, in which Max and Bigger converse, Wright elaborates upon Bigger’s final attempt to explain his reasons for committing the murders. Because Max asks Bigger befitting questions, Bigger feels as if Max truly is the one who understands him. Unfortunately, “Max’ eyes were full of terror”(392) at hearing of Bigger’s final reasons for killing Mary and Bessie.

Max’ reaction obviously indicates that even he cannot truly understand Bigger’s actions, nor Bugger himself. In the end, Bigger remains alone, like he always has been. Also, as Max walks away, Bigger “smiled a faint, wry, bitter smile”(392). This distorted smile implies that Bigger has not fully come to understanding himself, and his only just beginning to comprehend certain aspects of himself. As a result, it infers that Bigger knows that no one will ever understand him, as he would like. Hence, Bigger develops his self-realization from the murders of Mary Dalton, the prison environment in the third book, and the symbolic final scene between Bigger and Max.

Consequently, from this study of Bigger’s psyche, it is evident that the “Bigger That Might Have Been” is basically: ‘a decent man’; such a result to become of Bigger, however, may only occur if Bigger’s father was present, his family was not so impoverished, or even if he had maintained his job working honestly for the Daltons. To produce the “Bigger That Might Have Been,” slavery should never have occurred! 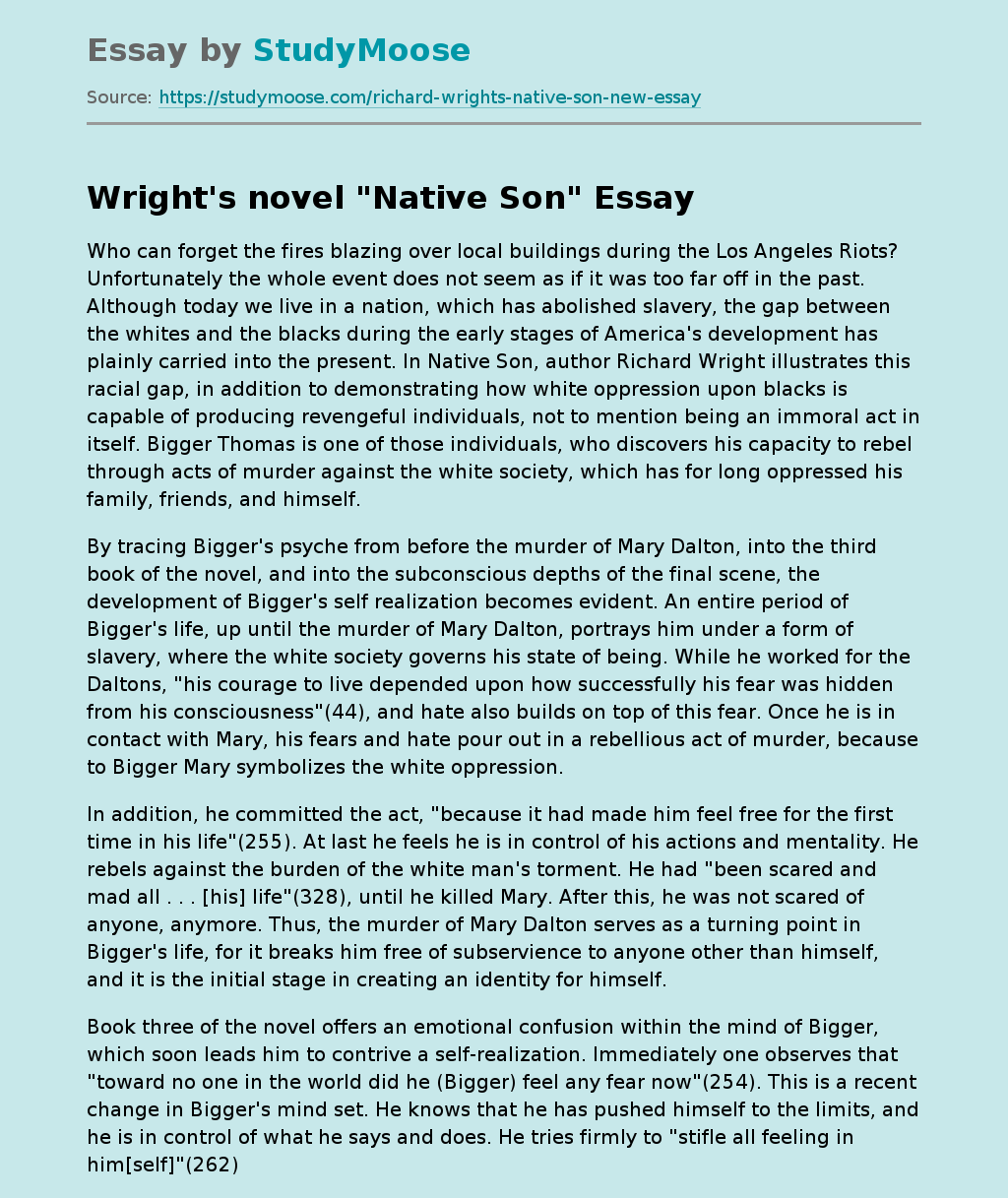