Richard III from the Tudor period

Shakespeare lived and worked under the tenure of Elizabeth I, the last of the Tudor monarchs, thus he was predisposed to represent Richard as a wicked person or risk the wrath of his sovereign. He also researched his play using sources from the Tudor period; therefore he was biased against Richard, having read the works of others who had also been inclined to be hostile towards him. For example, Sir Thomas Moore, a respected lawyer and scholar, was one of the first Tudor propagandists.

Don't use plagiarized sources. Get your custom essay on
“ Richard III from the Tudor period ”
Get custom paper
NEW! smart matching with writer

He was chancellor to Henry VIII and depicted Richard as a man who was “little of structure, ill featured of limbs, crook backed, his left shoulder much higher than his right, hard favoured of visage… He was malicious, wrathful, envious and from before his birth ever froward. ” Moore grew up in the home of Cardinal John Morton, who had been one of Henry VII’s councilors and thus was a sworn enemy to Richard III; hence Moore inherited a similar antipathy towards Richard.

His account of Richard in his unfinished novel ‘History of Richard III’ is given credence because he was known to be an educated man and also because he was a martyr, being executed later in his life by Henry VIII. However, Moore was only seven upon the date of Richard’s death in 1485, and his profile of the ill-fated king is taken from the works of Richard’s other enemies. Moore also happened to be a valuable member of Henry VIII’s court at the time of his writing.

It is clear that all these factors had a strong influence on Moore’s depiction of Richard. Hence, whether Richard really was an evil man or not, didn’t matter, he was destined to be illustrated as a malevolent character due to the beneficiaries of the current regime. Moore was cut off in the middle of writing his history of Richard and thus he was unable to finish it, but there were plenty of other Tudor apologists who were willing to add to and expand on his opinions of Richard.

Edward Hall produced a very similar narrative of Richard to the one Moore had written, describing him as “small and little of stature, so was he of body greatly deformed, the one shoulder higher than the other, his face small, but his countenance was cruel, and such that a man at the first aspect would judge it to savour the smell of malice, fraud and deceit… ” In reality Hall, Shakespeare and many others writing about Tudor history, were not just inclined to disparage Richard, they had a tendency to get their facts wrong as well or exaggerate them to an extreme.

The reason they were believed was because their accounts were at least rooted partly in truth. For example, people knew that Richard had taken the crown from his nephew Edward V, and when Edward and his brother Richard disappeared from the Tower of London people were liable not only to believe that Richard had murdered the two boys, but that he had been murdering people a long time before his brother Edward IV’s death.

Writers were able to take advantage of this willingness to accept a certain story by embellishing the truth and making stories far more dramatic than they might really have been or by making people do fantastic things that they hadn’t done in reality. For example, Shakespeare wrote about Richard slaughtering men left and right at the Battle of St. Albans and people were willing to believe this, discrediting the fact that Richard had actually been only two years old at the time. The other reason that these historical writings were accepted was because there were no historical researchers to challenge the mistakes that were regularly made.

As England entered the 16th century, people began to criticize the old style of chronicle writing and a new type of historian emerged, Polydore Vergil being the one who created the most impact as he tried to analyze the history he was writing rather than just describing it. Vergil also researched his history carefully instead of copying others, yet he still manage to describe Richard III as “little of stature, deformed of body, the one shoulder being higher than the other, a short and sour countenance, which seemed to savour mischief…

” Hence this false image of Richard lived on, so that it became accepted that this was the truth and that Richard really was a deformed villain. However, now we know that these various sources are not telling the truth about Richard, but are acting as propaganda instead. Therefore, we must ask that, if Richard wasn’t the immoral cripple that we have been brought to believe he was, then what was he really like and what really happened during his reign?

Richard III from the Tudor period. (2017, Oct 27). Retrieved from https://studymoose.com/richard-iii-essay 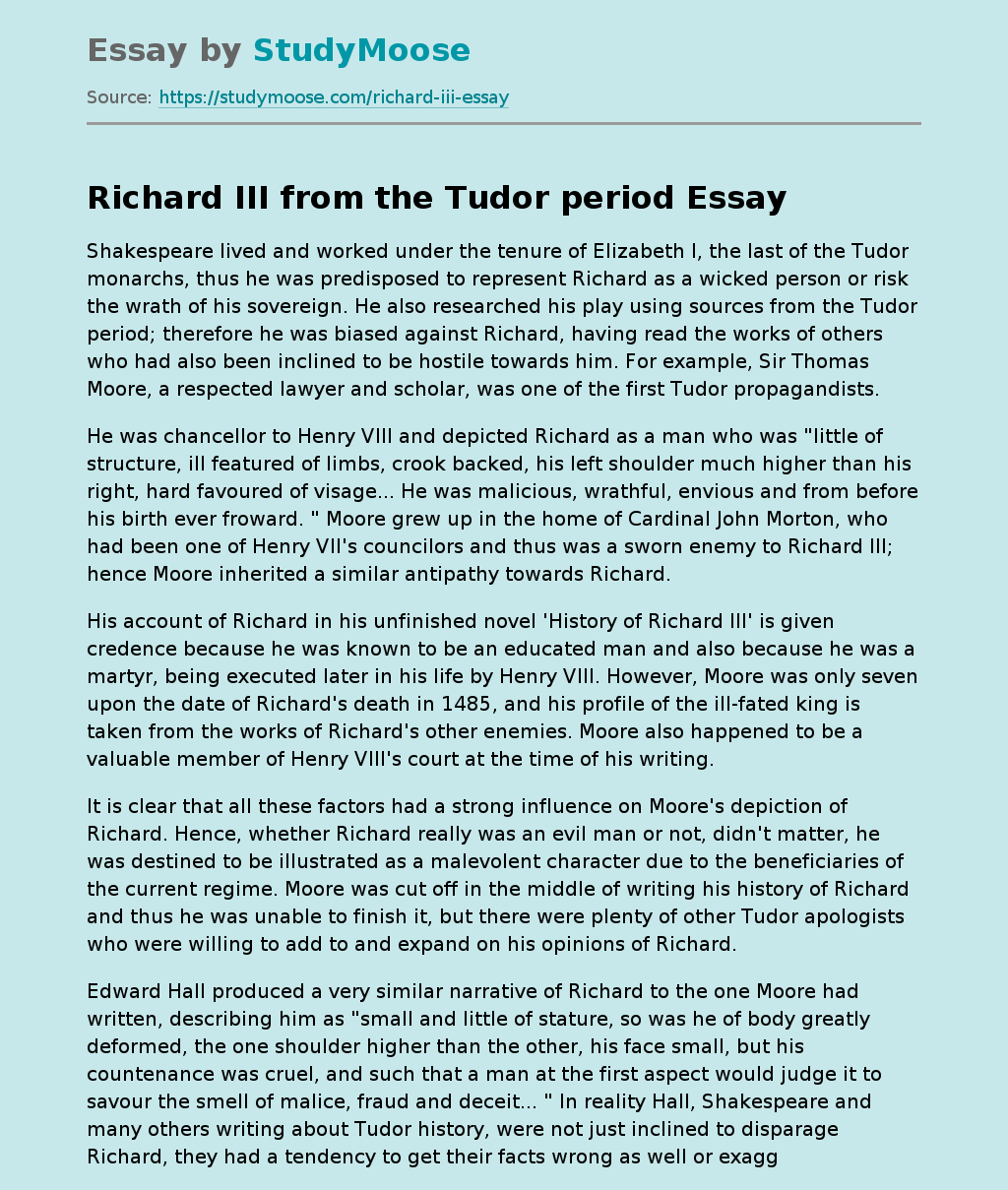