In “Superman and Me” by Sherman Alexie, the narrator’s claim is that if you do your best to obtain knowledge, even those considered to be low class can flourish and rise up in a world such as ours. In this specific case, the narrator turns his quest for knowledge into a fight to improve his life as well as the lives of his fellow Indian’s. He read whenever possible in hopes that he could escape the poverty of the reservation and make something of himself, unlike the other kids who purposely did bad in class and pretended to be stupid.

Don't use plagiarized sources. Get your custom essay on
“ Rhitorical Appeals in Literature ”
Get custom paper
NEW! smart matching with writer

Sherman Alexie uses the rhetorical appeal of Pathos, or emotion, as well as Ethos, to get his point across. He writes about how when he was a kid, no one was there to help them in school and teach them how to write properly, and how as an adult he Is continuously fighting to help kid’s in the same situation he was once in so that they do not have to go through what he did to succeed and become successful in life.

There is no better interpretation of what Alexie is trying to prevent or solve as he himself was in the same situation that he is fighting to end to this day.

He says “I am smart. I am arrogant. I am lucky. I am trying to save our lives” (Alexie Phar. 8). Throughout his essay, he shows how using his knowledge, arrogance, and luck he manages to “break out” of the Indian reservation to become a successful writer in an attempt at saving “our” lives: Not just his life, but the lives of all Indians, both current and future.

In the poem “Crazy Courage” by Alma Luz Villanueva, the author talks about a man named Michael that she met in her fiction class, who, as she later finds out, is a cross dresser. Using the rhetorical appeal Pathos, the author truly proves her point- that other people’s opinions do not matter so long as you are courageous and confident about yourself. In the poem, Michael seems so courageous, even though he is dressed in woman’s clothes and in front of an entire class, that it “shocked / the young, seen-it-all MTV crowd / into silence”(Villanueva 20-23). The class was so shocked at the confidence of the person in front of them considering his situation that they couldn’t even speak. In fact, even “those who would kill him” were impressed at the level of courage he must have had, and the fact that he seemed even happier in the seemingly odd clothes and outfit he was wearing (Villanueva 27).

Last but not least is the poem “Theme for English B” by Langston Hughes. The author Langston Hughes seems to use more of a Logical appeal. While it doesn’t seem to be the most organized Poem, there is without a doubt some sort of claim. While it isn’t necessarily the best example of a claim that relates to knowledge and individual power, it seemed like an interesting poem to write about. In my opinion, the author is trying to show that even though he is of a different race than his white teacher, and even though he is from Harlem, he is just like everyone else. He likes “to eat, sleep, drink, and be in love. / [He] like[s] to work, read, learn, and understand life”(Hughes 21-22).

On the other hand, I feel like this poem has a hidden message, which is that obtaining knowledge is important for him to eventually become as “free” as his older, white teacher. That is why, in my opinion, he mentions where he went to school and the fact that he is in college to learn, in hopes of getting somewhere in the long run. That is also why, in my opinion, he points out that he is the only colored student in his class. Not necessarily to point out his color or race, but to show that he is one of the few in his race that finds knowledge to be an important thing. Overall, I feel like all of these claims are somewhat valid.

The claims in “Crazy Courage” and “Superman and Me” are without a doubt true in my opinion, however the claim in “Theme for English B” seems a bit weak. I’m not quite sure when the third poem was written, however nowadays I feel like the level of colored people obtaining an education is relatively fair. Racism is for the most part nonexistent in at least the northern half of the United States, so that is no longer a problem in our society here. I feel like if the poem was written recently it would not have been as successful as it was, and you wouldn’t be finding it in text books. Perhaps the poem was written a long time ago so the authors points were valid, however nowadays plenty of colored people are receiving proper educations and going to college. 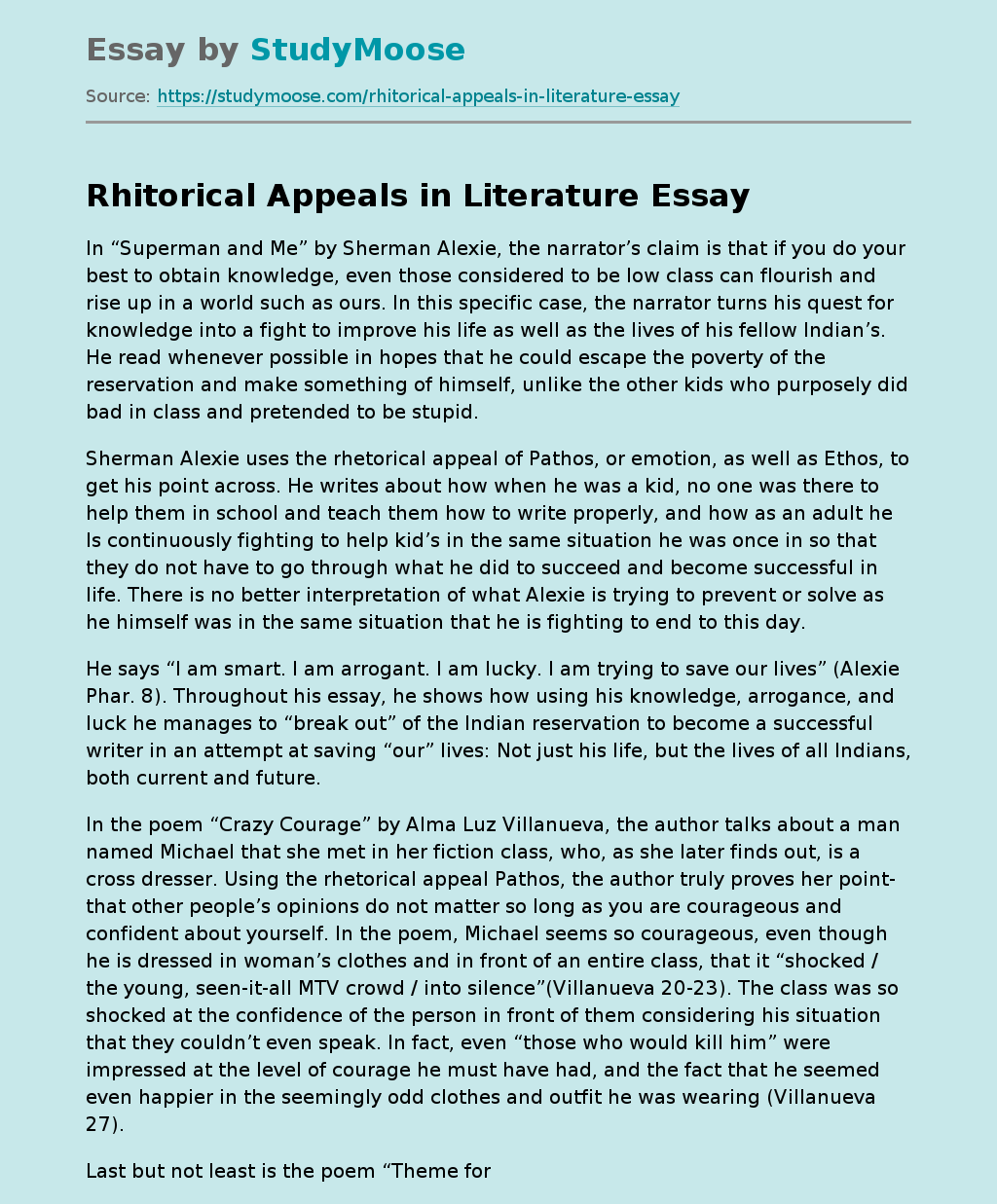