Rhino poaching in Assam is a major environmental issues in India which continues in the region of Kaziranga National Park, Manas National Park and some other grasslands of Assam. The one horn rhino or Indian rhino is surviving in the north-east corner of India, Assam. Kaziranga National Park, Pobitora in Marigaon district and Orang National Park in Darrang district of Assam account almost 95% of the total wild One horned rhino in the world.[1] These rhinos are inhabited most of the floodplain of the Indogangetic and Brahmaputra riverine tracts and the neighboring foothills.

Don't use plagiarized sources.
Get Your Custom Essay on Rhino Poaching in Assam Just from $13,9/Page

Moghul emperor Babur on a rhino hunt, 16th century Sport hunting became common in the late 1800s and early 1900s.[2] Indian rhinos were hunted relentlessly and persistently. Reports from the middle of the 19th century claim that some military officers in Assam individually shot more than 200 rhinos. By 1908, the population in Kaziranga had decreased to around 12 individuals.[3] In the early 1900s, the species had declined to near extinction.

[2] Poaching for rhinoceros horn became the single most important reason for the decline of the Indian rhino after conservation measures were put in place from the beginning of the 20th century, when legal hunting ended. From 1980 to 1993, 692 rhinos were poached in India. In India’s Laokhowa Wildlife Sanctuary 41 rhinos were killed in 1983, virtually the entire population of the sanctuary.[4] By the mid-1990s, poaching had rendered the species extinct there.[5]

Six methods of killing rhinos have been recorded:[4]
Shooting is by far the most common method used; rhino horn traders hire sharpshooters and often supply them with rifles and ammunition. Trapping in a pit depends largely on the terrain and availability of grass to cover it; pits are dug out in such a way that a fallen animal has little room to manoeuvre with its head slightly above the pit, so that it is easy to saw off the horn. Electrocuting is used where high voltage powerlines pass through or near a protected area, to which poachers hook a long insulated rod connected to a wire, which is suspended above a rhino path. Poisoning by smearing zinc phosphide rat poison or pesticides on salt licks frequently used by rhinos. With a noose, which cuts through the rhino’s skin and kills it by strangulation. Reasons[edit]

Illegal rhino horn trade has been the main problem facing managers of the rhino-protected areas of Assam. Some other parts like nails, skins have very high value in Asian traditional medicinal market. The horn is believed to be the strongest phrodisiac in China and used as Traditional Chinese Medicine. These parts are sold in areas where these beliefs are practiced – mostly Asian countries including Vietnam and China on the black market. 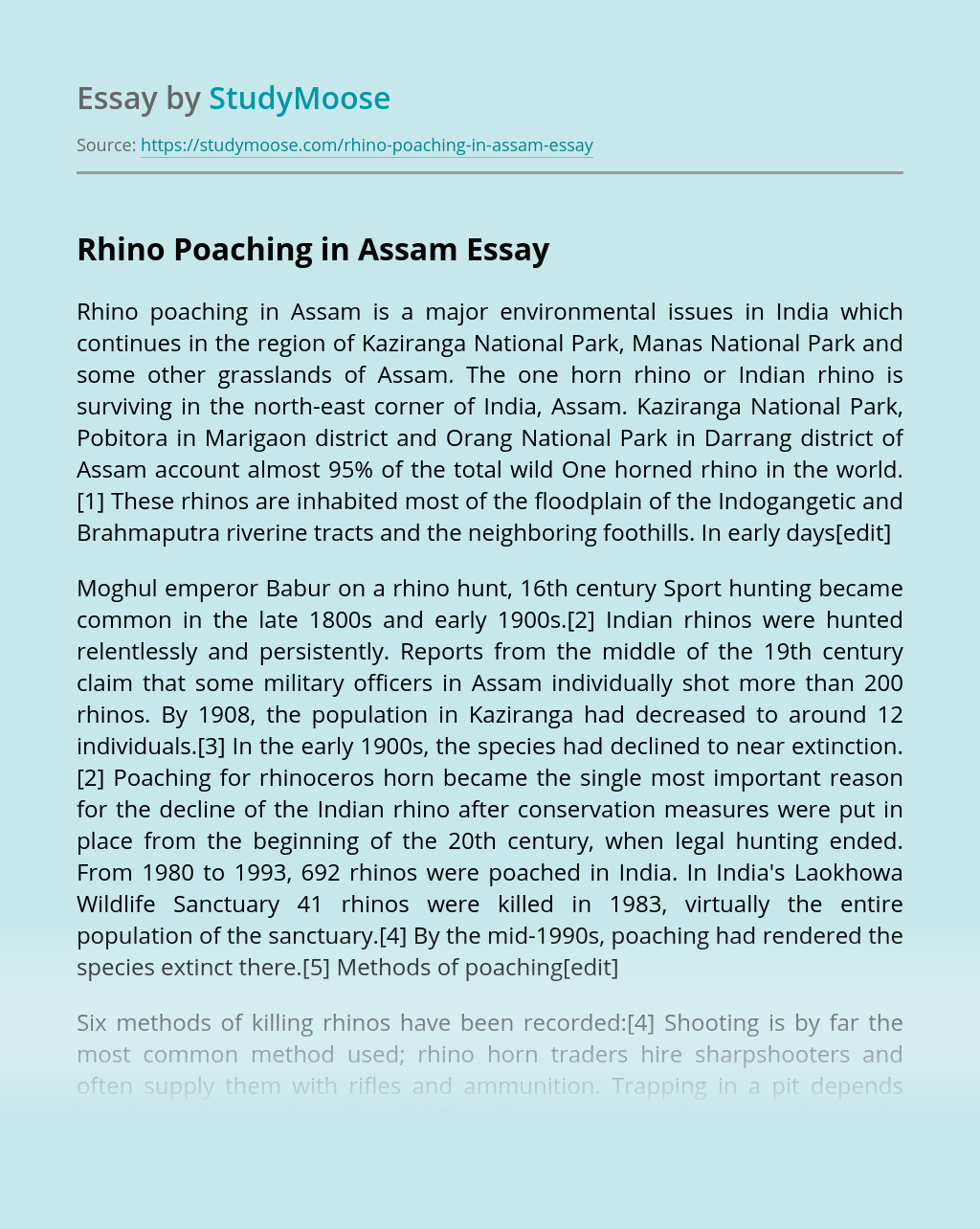 Rate this post “Only when the last of the animal’s horns, tusks, skin and bones are sold, will Mankind realize that money can never buy back our wildlife.” – Wild at Heart. Good morning to my teacher and fellow classmates. Poaching has traditionally been defined as the illegal hunting, killing, or capturing of wild animals.today...

Rate this post “DOOMED” was the headline on the front page of the United Kingdom newspaper, the Daily Mirror, in 1961. The article explained how rhinos were doomed to disappear from the face of the earth due to man’s folly, greed, and neglect. Rhinos once roamed many places throughout Eurasia and Africa and were known...

Rate this post Today more and more people are trying to preserve the planet’s animal life. Perhaps this endeavor can best be seen in the sustained efforts of various animal rights lobby groups which vigorously campaigning against animal cruelty. In the past many people used actual animal pelts as items for home decor but now...

Rate this post PROBLEM: What could Jonah Nobleza do to balance the employment and production of MGV? OBJECTIVES: To be able to find an alternative way to scale-up the production without sacrificing the mission of MGV. To prove to the investors that MGV is a successful social enterprise with viable economic. To be able to...

Rate this post Well i am going to tell you about factory farming. First off we can all do something about this. How would u feel about thousands of animals crammed are being crammed into dirty, windowless sheds and confined to wire cages and gestation crates. They are basically forced into cannibalism because they scratch...

Rate this post Anwell is dying. He made a blood oath with his friend Finnigan. They agreed that Finnigan would only do bad, and that Anwell chose his new angelic name should be Gabriel so he could do no wrong. It was thought that if Gabriel did nothing but good, he would no longer be...

Rate this post Moral implies conformity to established sanctioned codes or accepted notions of right and wrong or the basic moral values of a community. Ethical may suggest the involvement of more difficult or subtle questions of rightness, fairness or equity. While legal is sanctioned by law or in conformity with the law especially as...

Rate this post Abstract The presence of invasive mammals is known to influence the structure and composition of plant communities, making the effect of mammal control in New Zealand forests a topic of long-enduring interest. We assessed the effects of mammal control on plant communities, by measuring the number of tree species, tree evenness and...