Many speeches today are remembered by what they say that connects the individual giving the speech to the audience listening to the speech. Jobs uses his rhetoric through ethos, and pathos to construct his speech, Steve rhetorically supports his arguments. Steve Jobs bestow only his stance and account as evidence. Jobs made himself to be more likable and realistic by telling the audience about his life and the events that took place. He generates an image of himself, which is a supporting rhetoric in ethos.

The three stories he produces through his speech brings an understanding of ethos and pathos to life events and stories. The first story he talked about was connecting the dots. Which spoke about how he dropped out of college after 6 months. ‘Here I was spending all the money my parents had saved their entire life’ (Jobs ) when he couldn’t see the value in school.

Jobs trusted that it would all work out eventually. ‘Looking back it was the best decision I ever made’ (Jobs).

After dropping the classes that didn’t excite him, he looked for classes that did. He didn’t have a dorm room anymore so he slept on the floor in his friend’s room. Jobs couldn’t afford it. He even turned coke bottles in for 5 cents just so he could buy food with. He’d trek miles across town every Sunday for a good meal at Hare Krishna Temple. Jobs sat in on possibly the best calligraphy class available. 10 years later he used that very calligraphy class to help design the first Macintosh computer.

Looking back if he hadn’t sat in on that single course in college he invention of the Macintosh wouldn’t have they multiple fonts it has now. So in words Jobs described how ‘you can’t connect the dots forward'(Jobs) but once you do look back the dots all connect together.

Jobs told this story, to show you to always follow where your heart leads you and have the confidence that it knows where it’s going. (Zetlin) Steve Jobs second story was about love and loss. Which he speaks how he lost Apple, but then was able to find what he really loves to do. Apple was his company, yet he got fired. Jobs started Apple at 20 years old in his parent’s garage. At 30, Jobs was fired from his company. Why? The other guy running the company with Steve had a falling out. Their ‘visions for the future’ (Jobs) started to deviate. Jobs felt that he had lost everything. Apple was the focal point in his life and it was now gone. Losing Apple did not change what he loved doing. So he started over. Started a new company called NeXT, and another company called Pixar. (Jobs) Apple then bought Steve’s company NeXT, and now its the ‘heart of Apple’ (Jobs) Jobs believed that if he had never gotten fired from Apple he would’ve never created NeXT and Pixar. ‘Keep looking and don’t settle’ (Jobs) He told this story to tell you that even the worst thing that could happen to you, just might, in turn, be the best thing to ever happen to you. Steve Jobs recognizes that sure he got fired from Apple but he built two new company’s one of which he made the most famous and love children’s movie, Toy Story. And if he was never fired from Apple he believes he would have never had those creative ideas to create NeXT and Pixar.

The last story Jobs talked about was death. In that story, he tells the tale of how he found out he had cancer and how he had dealt with it. The Doctor told him that he had a tumor on his pancreas and that it was a type of cancer that was incurable. His Doctor gave him three to six months to live. Jobs lived with the diagnosis of dying in three to six months. Jobs went from thinking he had years to say goodbye to his family to only have three to six months. But after having a biopsy done, the cancer turned out to be curable with surgery. In the story, Jobs says that was the closest thing the death that he ever faced. ‘Your time is limited, so don’t waste it living someone else’s life.’ (Jobs) He said that in his speech with the use of pathos to tell you to be your own person in other words and don’t try and be like everybody else. Jobs didn’t travel much, and he didn’t go to all the conferences that normally CEOs would normally do. His reasoning was that Jobs wanted to be home for dinner with his family. Jobs rarely did speeches so why Stanford? Well, Stanford was only ten minutes from his home, and Jobs even as a college drop out, he still respected the university. So if Steve Jobs was going to give a speech anywhere it was going to be Stanford University. (Gayomali) ‘Stay Hungry, Stay Foolish’ is a quote straight out of Steve Jobs commencement address at Stanford University’s graduating class of 2005. That quote he got from the Earth Catalog growing up and it stuck with him. He said it as a farewell message to the graduating class, just like the Earth Catalogs final issue. That quote stuck to many who heard his speech. Jobs wanted us to use this advice, he always wished it for himself Stay Hungry Stay Foolish. That is a lesson we can all chase. (Jobs)

The reason Jobs told these stories is because they tell a comprehensive message. Never give up. He went through a lot before finding his true calling and he didn’t give up. He kept pushing through. He sacrificed many things. But he never gave up. “The Stories triumph over struggles which resonate with audiences because humans are hard-wired to empathize with one another” (Gallo) Which has a rhetorical backing in pathos. Steve Jobs was a well known successful man. And this commencement address at Stanford was heard by many. Now that Jobs has passed away, he is acknowledged by everybody. Seeing where Apple is today in 2018, we can visualize where it all started. What Jobs went through and the stories are more profound than before. This Speech he made at Stanford University back in 2005 is a well-known speech. But this speech almost never happened. Then where would we be? After Jobs gave this speech it inspired many people to never give up and to always do what you love. Follow your heart, and never let someone tell you otherwise. 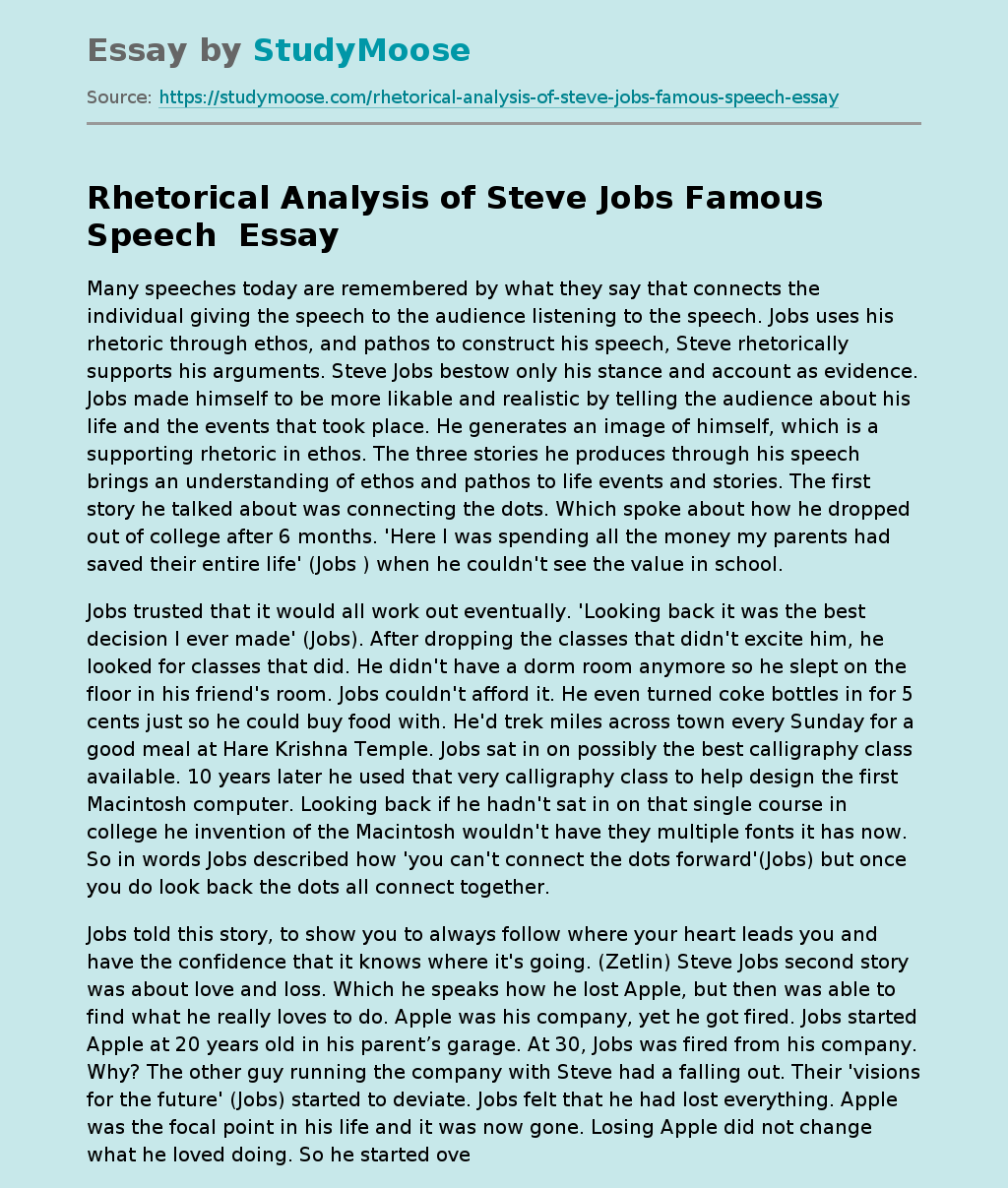