Jamaica Kincaid grew up in a world where everything she owned wasn’t hers. While she may have physically owned it, mentally she did not. As her world of Antigua was being eaten alive by England, Kincaids family loved every bit of it. In the essay, On Seeing England for the First Time, Jamaica Kincaid uses several literary elements to explore her negative feelings towards England and England’s influence in Antigua. Three of the main elements used in the essay are structure, ethos, and diction.

Structure plays a role in the power of this essay by the way the author presents ideas. Kincaid employs the method of increasing importance to bring her points home. By beginning the essay with herself in a classroom the reader gets a firm foundation of setting, time, place, etc. She describes seeing the map of England and the very first thoughts that go through her head. She then tells about the people that got to wear it and where they wore it and how it effected her life.

With each story Kincaid tells, she is also using increasing importance in conjunction with ethos to make the reader feel as she did. She tells further stories about her childhood experiences that make the reader feel England’s oppression and begin to hate what was happening themselves. She tells of her fathers hat and how he wore it everyday from the second he got up to the second he went to bed shows exactly how much some people cared for England and how they were falling under its spell.

The reader feels as though England is forcing this upon them and emotions are felt towards the subject. Each story gets more relevant and more powerful, causing increased importance and increased hatred.

A third method used in the essay is diction, which is used to show how great the oppression of Antigua had become. Almost everything in Antigua was made in England, ranging from socks to the idea of eating a large breakfast. England had encompassed almost everything in Antigua and most of the people had fallen to it. Kincaid repeats the phrase and idea “Made in England.” She tells of this being on almost everything she owned. She says, “Those words, ‘Made in England,’ they were written on the box the oats came in(,)… on the box the shoes I was wearing came in; a bolt of gray linen cloth… my mother had bought…(, and) so were my socks and undergarments.” She applies “Made in England” to cars, hats, food, and ideas. She tells of her fathers hat that was “Made in England,” Even ridiculing England to call say that the hat was made of the wrong material. Kincaid describes the hat to be made of felt, the wrong fabric for the climate and time of year. In a way this relates to the overall subject of England not being right for Antigua. Kincaid feels as though England is something that Antigua is “wearing,” and incorrectly at that.

Jamaica Kincaid was just a poor soul trapped under the sway of the English culture. While many others didn’t even realize the change, Kincaid saw it happening all around her. She closes the story by telling of how she would need to know how to correctly draw a map of England for every test she was ever going to take. She tells how at the time it was a simple statement, but how it would grow to her erasure, as it had many others. She was there to see her world being erased and refused to let that happen to herself, which is why she wrote this essay. She told of the the oppression using literary strategies in order to make her hatred fully known to readers, something she did quite well. 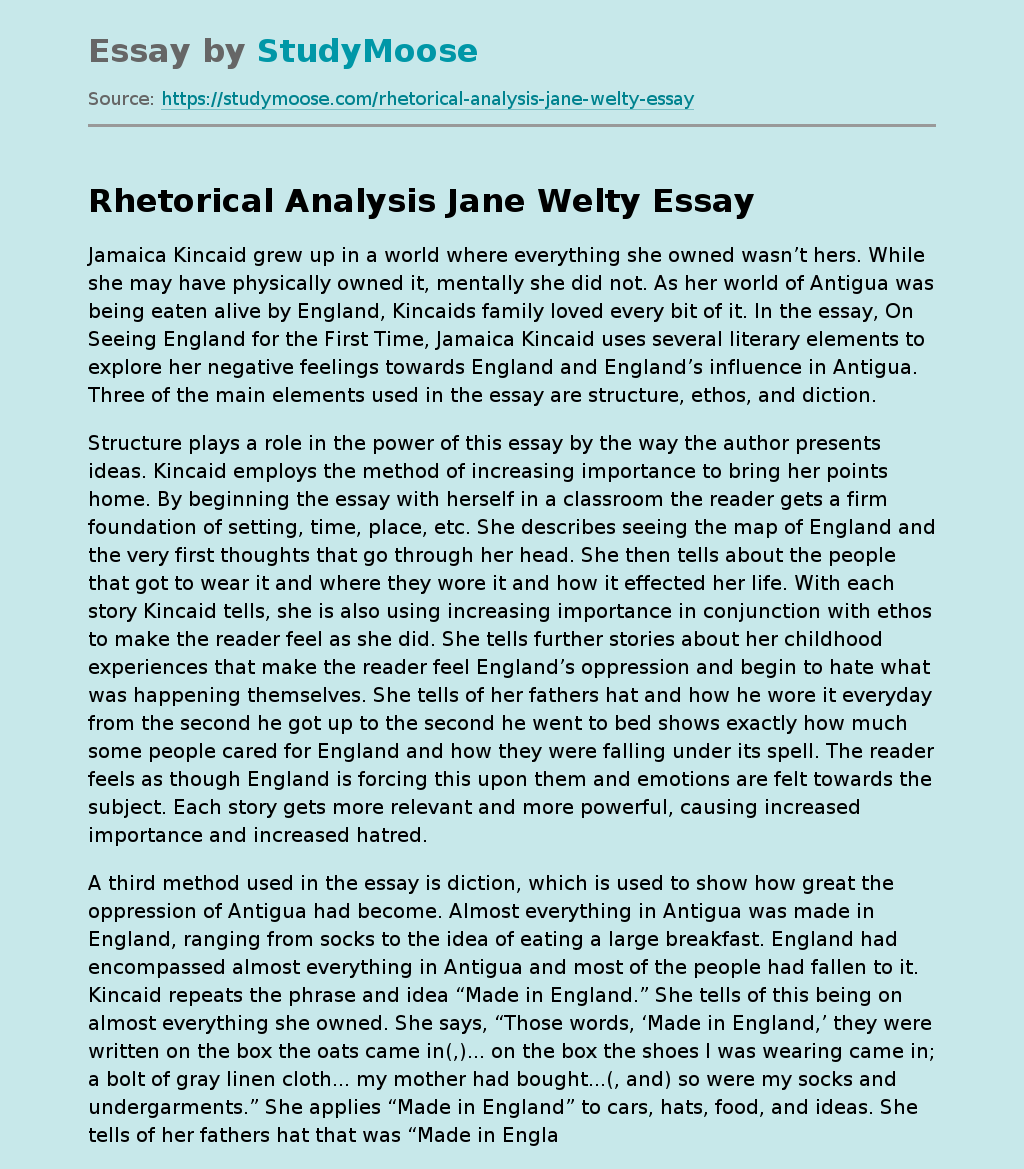