Rhetoric pertains to the use of language to create an effectively persuasive argument. Stereotyping is taking the description of an individual and applying it to a group as a whole. There are many generalizations made when it comes to politicians, tattooed people, feminists, and elderly people. This essay will discuss stereotypes connected to each of these groups, explain the images and feelings these groups raise, if the stereotypes are positive, negative, or both. This essay will also discuss whether or not there is any truth to these stereotypes and describe the rhetoric used to make these stereotypes come alive.

When most people think about politicians they think liars, cheaters, and hypocrites. Most people do not trust any politician with good reason. There have been a lot of promises in the past and in the present that have been made by politicians and not kept. It would seem that the promises were made only to gain the confidence of voters, and forgotten once in office.

It seems as though no one can get a straight answer from a politician. There seems to be a lot of scare tactics, Ad Hominem, straw man, and red herring fallacies when it comes to politics.

Political stereotypes are definitely seen as negative in today’s world. Rhetoric and politics studies the role of persuasion in the political process (Parry-Giles, 2008). “Classical scholars conceived of rhetoric as a practical art involving the performance of public oratory in the contexts of politics, law, and ceremonial occasions, separated from the philosophy of knowledge” (Parry-Giles, 2008).

Today, it is used by an adversary to state something truthful while twisting it into a negative light. Tattooed people have their own stereotypes as well.

Most stereotypes for people with tattoos are bikers, gang members, criminals, and military. Even though tattoos have grown in popularity over the last few decades, they are still seen as “taboo” and looked upon in a negative way. Men with tattoos are still seen as reckless or criminals. Women are seen as being trashy or smutty, for example a tattoo on a woman’s lower back is known as a “tramp stamp”. There are still many businesses that will not allow tattoos to be visible because it is “unprofessional”.

You don’t have look hard to find hundreds of corporations which have banned employees with tattoos. Tattoos are a form of art and have meanings behind them. They have been around for centuries and have been historic rituals in many cultures, but the myth still remains that tattoos send a message to corporate America that you are ignorant, low-income, and possibly have a criminal record. The County of San Bernardino in California bars all employees from wearing denim, having visible tattoos, and any piercings in the nose, lip, or tongue that contains jewelry.

People with tattoos may never be able to overcome being judged by society. Many think that feminists are angry and hate men. Feminists are also called hypocrites because they want equal rights, but still want to be treated like women (Rockler-Gladen, 2008). People visualize women burning their bras, refusing to shave, and shouting about inequalities. As soon as someone says they are a feminist, they are lumped into the eccentric activist category. There are many stereotypes in regards to elderly people and they seem to go from one extreme to the other.

Many see the elderly as weak, useless, senile, and easy targets for scams. Others see them as angry, bitter, and unable to think for themselves. In some places the elderly are revered and thought of as being full of wisdom. It seems that there most of these stereotypes are seen as negative, as most are. The only stereotype that seems to be both positive and negative is the stereotypes of elderly people. Of course there are some truths to all of these stereotypes. Stereotypes are created by actually seeing examples in a class of people and then lumping everyone into that stereotype.

For example, I work for the County of San Bernardino and I am not allowed to wear clothing that makes my tattoos visible, so there are not very many people that know I have them. When people have found out that I have tattoos, they seem surprised because I am well mannered, nice, smart, wear glasses, and as they say “don’t seem the type that would have tattoos”. They aren’t quite sure what to say when I ask, “and what type is that? ” I have tattoos, I am for equal rights, and I have worked with and for many senior citizens so I don’t have any stereotypical views regarding these classes of people.

I would have to say that I do have very stereotypical views of politicians, and it is in a negative aspect. These are things that I already knew about myself. I am sure that once upon a time, there was such a thing as an honest politician, but unfortunately I can’t remember any politician that has not disappointed me. There are many generalizations made when it comes to politicians, tattooed people, feminists, and elderly people; and pretty much any class of people out there. Unfortunately we all seem to fall victim to stereotypes, either by using them against a certain class of people or being lumped into one. 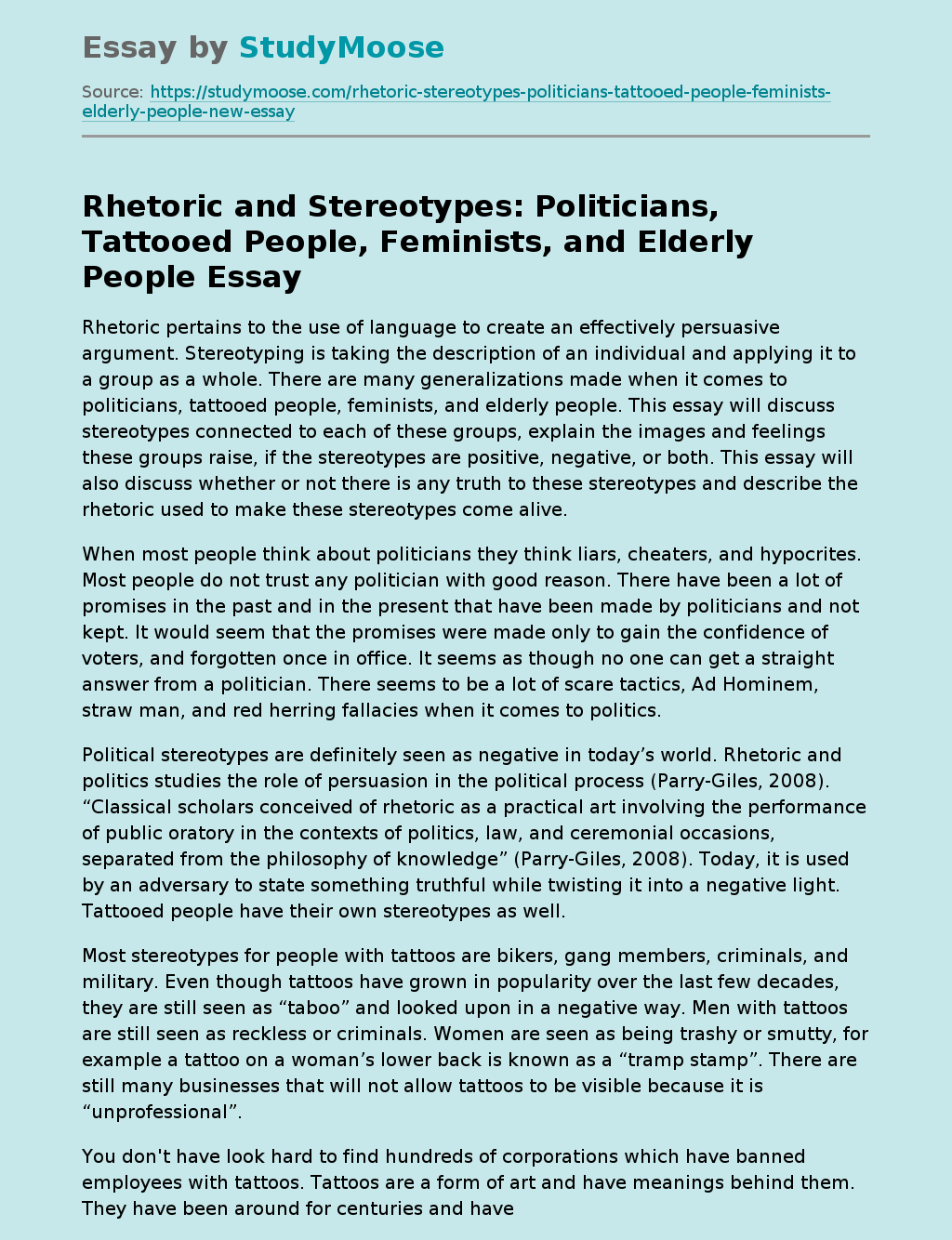