Rhetoric Dialogue on Importance of Uttarayan

Shivya: Hi Shivam, how is your uttarayan going?

Shivam: Very nice. How about you?

Shiyya: Enjoying. But I do not know why uttarayan is celebrated. Can you lighten me?

Shivam: Well shivya there is more to Uttarayan than just holding a string and a kite. Let us today understand the religious aspect of Uttarayan. Het can you pls. share with us the information that you have?

[By that time their other 5 friends join them and take part in the conversation. All of them give information about the topic which entilighten us about the religious aspect of Uttarayan]

Het: Hello everybody. Well Uttarayan is celebrated in many parts of the country and also in some other parts of the world with great zeal and enthusiasm. It is a harvest festival which is basically celebrated in the Hindu communities. In Indian, the states of Bihar, Bengal, Punjab, Maharashtra, Gujarat, Rajasthan and Tamil Nadu celebrate the festival with great fervor and gusto. Now I will tell Harsh to share some of information that he has.

Harsh: U know Het, In Tamil Nadu the festival is known as Pongal, in Assam as Bhogali Bihu, in Punjab, as Lohiri, in Gujarat and Rajasthan, as Uttararayan. In Uttar Pradesh it is celebrated as Khichdi or Donation festival. In Bihar it is known as Til Sankranti or Khichdi festival. Outside India, the festival is given due importance in the countries like Nepal where it is celebrated as Maghe Sakrati or Maghi, in Thailand where it is named as Songkran and in Myanmar where it is called Thingyan.

Shivya: Wow I thought Uttarayan is celebrated only in Gujarat. But I can bet it must not be celebrated anywhere like in Gujarat with the sky becoming so colourful. Devayani what information you have to share with us.

Devayani: Well you know the way Makar Sankranti is celebrated in every state of India with faith and joy, it can be guessed that the festival has some religious beliefs. This festival is mentioned in many of our religious text, which enlighten about the festival’s religious significance.

The religious scripture, “Gita” which is known as the voice of Lord Krishna, illustrates that six months of Uttarayan is the day time of deity. And, the 6 months of Dakhshinayan is the night for Gods. It is believed that person who scarifies his body in Uttarayan get a position in ‘Krishna Lok’. That person gets liberation, whereas, the one who dies in Dakhshinayan, has to be reborn.

In the era of Mahabharata, Bhishma Pithama had a blessing of wish death. Although lying on the bed of arrows, he did not sacrifice his life in the Dakhsinayan, and waited for the Sun to go in Uttarayan. It is believed that on the day of Makar Sankranti, when sun entered in the Uttarayan, Bhishma Pithama, discarded his body.

Scientifically, this day the sun begins its northward journey and enters the sign of Makar (the Capricorn) from the Tropic of Cancer. It is like the movement of sun from Dakshinayana (south) to Uttarayana (north) hemisphere. It is the one of the few chosen Indian Hindu festivals which has a fixed date. This day falls on the 14th of January every year according to the Hindu Solar Calendar. The festival is considered to be a day from where onwards all the auspicious ritualistic ceremonies can be solemnized in any Hindu family. This is thus considered as the holy phase of transition

What do you say Ashiti. Am I right?

Ashiti: Yes Deyanai, in fact another one religious story is also there which states that, Yashoda Mata kept fast to have Lord Krishna as her son. The story of Gangawatran is also linked with Makar Sankranti. It is said that on the day of Makar Sankranti, Ganga followed Bhagirath Muni and met the ocean. Conjunction of Ganga and ocean is the reason behind crowd of devotees taking bath in Ganagasagar on Makar Sankranti.

Shankranti means transmigration of Sun from one zodiac in Indian astrology to the other. As per Hindu customary beliefs, there are 12 such Sankrantis in all. But the festival is celebrated only on the occasion of Makara Sankaranti i.e. the transition of the Sun from Sagittarius (‘Dhanu’ Rashi ) to Capricorn(‘Makara’ Rasi).

Lastly Jai can you put some more information on the topic.

Jai: Yes my dear friends. Makar Sankranti holds special significance as on this day the solar calendar measures the day and night to be of equal durations on this day. From this day onwards, the days become longer and warmer. It is the day when people of northern hemisphere, the northward path of the sun marks the period when the sun is getting closer to them. The importance of the day was signified by the Aryans who started celebrating this day as an auspicious day for festivities. The reason behind this may be the fact that it marked the onset of harvest season.

Rhetoric Dialogue on Importance of Uttarayan. (2016, Nov 15). Retrieved from https://studymoose.com/rhetoric-dialogue-on-importance-of-uttarayan-essay 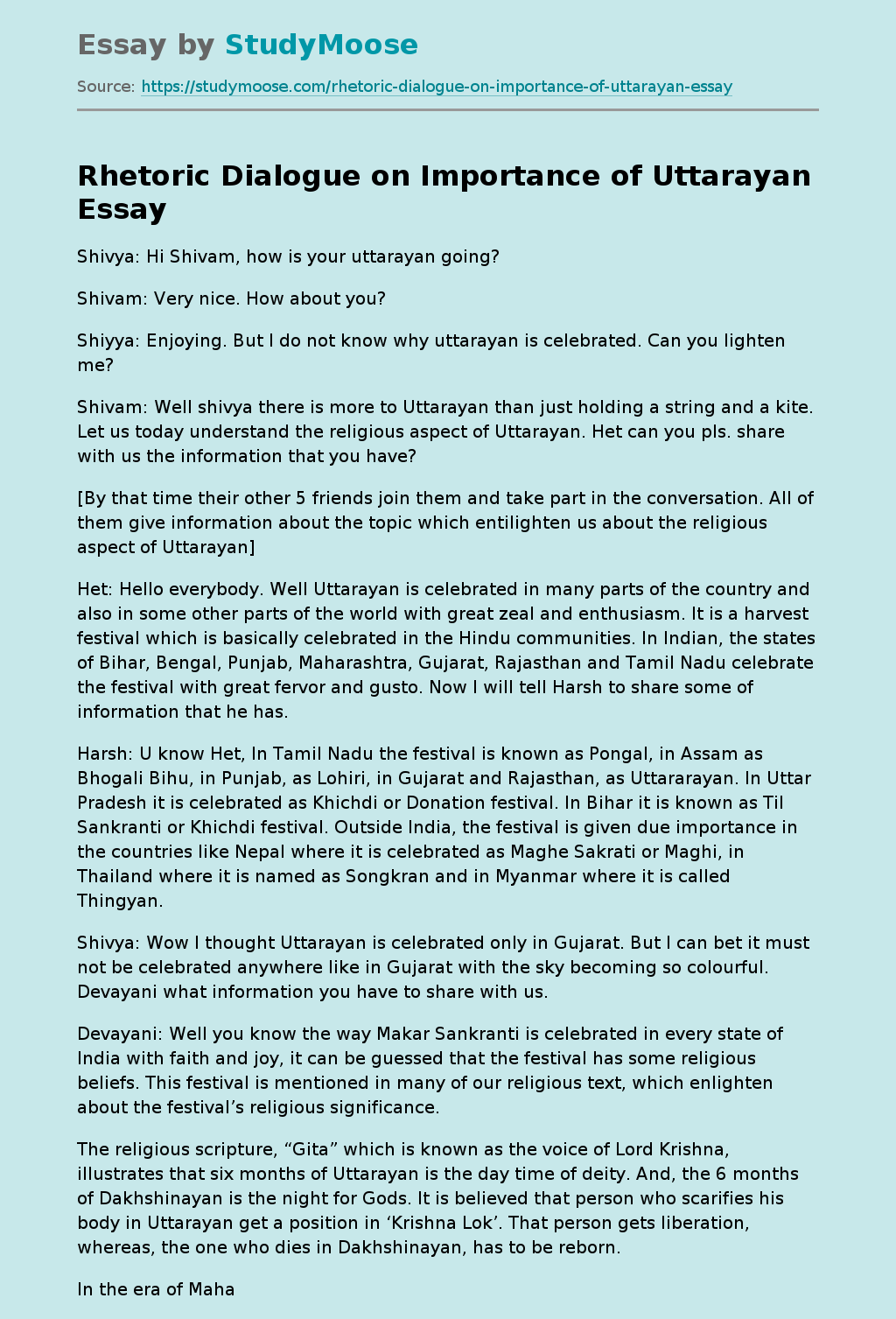