The American Revolution was a fight for independence from England. The war shows an assembly of the thirteen colonies and more importantly thousands of Americans. This included a variety of races, and gender. However, in Revolutionary Mothers author, Carol Berkin, mentions that women’s accomplishments during the conflict are often forgotten. Throughout the novel Berkin describes many events that showcase women’s efforts during the war. In the American Revolution women contributions were critical and essentially led to the successful outcome of the war.

Don't use plagiarized sources. Get your custom essay on
“ Revolutionary Mothers’ Role in the American Revolution ”
Get custom paper
NEW! smart matching with writer

The revolution in America took place for several different reasons. Out of the most significant, one can be considered the taxations on certain goods. The extreme disagreement with these taxes led to boycotts throughout the colonies. American women were one of the early protesters; the boycotts were efficient because women were a large portion of consumers (Berkin 14). The boycott of the stamp act largely involved women. Berkin claims, “In New York City a group of brides-to-be said no to their fiancés, putting a public notice in the local newspaper that they would not marry men who applied for a stamped marriage license” .

From this example it is evident that women were very involved. Giving up marriage because they refused to pay a British tax shows some women were very devoted. While the revolution took place husbands and older male household members were most likely off fighting in the war. With many of the tasks normally completed by males not being completed, women began to takes these chores, in addition to their own.

These jobs varied; some included taking care of children, working in shops, and working on harbors (Berkin 31). Women taking on men’s jobs during the war were great contributions to the success of the war. Without the extra support from females at home everything would have been thrown out of balance. The production of certain goods would not have existed without the hard work at home. Basically, women during the revolution who had determination and involvement in a household can be considered one of the largest contributions to the war.

In American in the 1700s it was uncommon for women to join battles or war. Men were thought to protect women from violence and women were to support men with food, and etc. However, some females thought it was necessary to serve their country by joining the military. Others joined to stay close to their husbands. These women would dress up like men and attempt to enlist in the continental army. Some would succeed while others would be discovered and therefore punished. Nevertheless, women who did make it through the enlisting process and through the war were usually rewarded with payment, or appreciation (Berkin 60).

During war time in the American Revolution there were many different jobs, on and off the battle field, that were connected to the continental army. Berkin mentions, “cooks, seamstresses, washerwomen, and nurses” . The people who did these tasks were considered camp followers. Women were very useful for these jobs because they had experience. Men had never really learned household tasks because they were thought of as women’s jobs. “…yet men accustomed to their mothers, sisters, or wives doing the laundry balked at performing this traditionally female chore” (Berkin 56). On the other hand, many men did work as nurses, or doctors for the army. Although, when the realization that diseases and contaminants were spreading through the troops, the military set out for more nurses (Berkin 58). This gave women the opportunity to join and help out. The contributions women carried out as camp followers were highly vital to the continental army and the revolution.

The American Revolution is learned about all throughout the world and is usually described through one perspective. In popular culture the contributions women made during this war are frequently neglected. There are many theories for why this occurs. During the 1700s white men were usually the educated and informed people in America. As a result they are the individuals writing documents, biographies, essays, and more. Revolutionary stories were most like recorded by men and during that time men were thought of as superior to women. These records therefore likely had achievements by men. The future of America has more information, during the revolutionary period, regarding men rather than women. As for now, with more information on women’s contribution towards the revolution, textbook creators are so used to the one sided perspective that they do not care for the other side, or they feel the roles were insignificant.

Revolutionary Mothers describes what women went through during the American Revolution. It shows that everyone, male and female, participated or was affected by the war in some way. Displaying all sides of the conflict the novel alters the usual way of viewing the revolution. By comparing it to the common perspective it demonstrates that accepted history was written with a male bias. It was written in 1700s male perspective because they were the one who were generally educated and it was difficult for women to have documents published.

Women who participated in the American Revolution, through a variety of means, deserve the honor and recognition that everyone else received. Their contributions were just as important to the success and result of the war. Ultimately the disregard of a clear and full perspective on history is a problem and could have negative effects in the future. 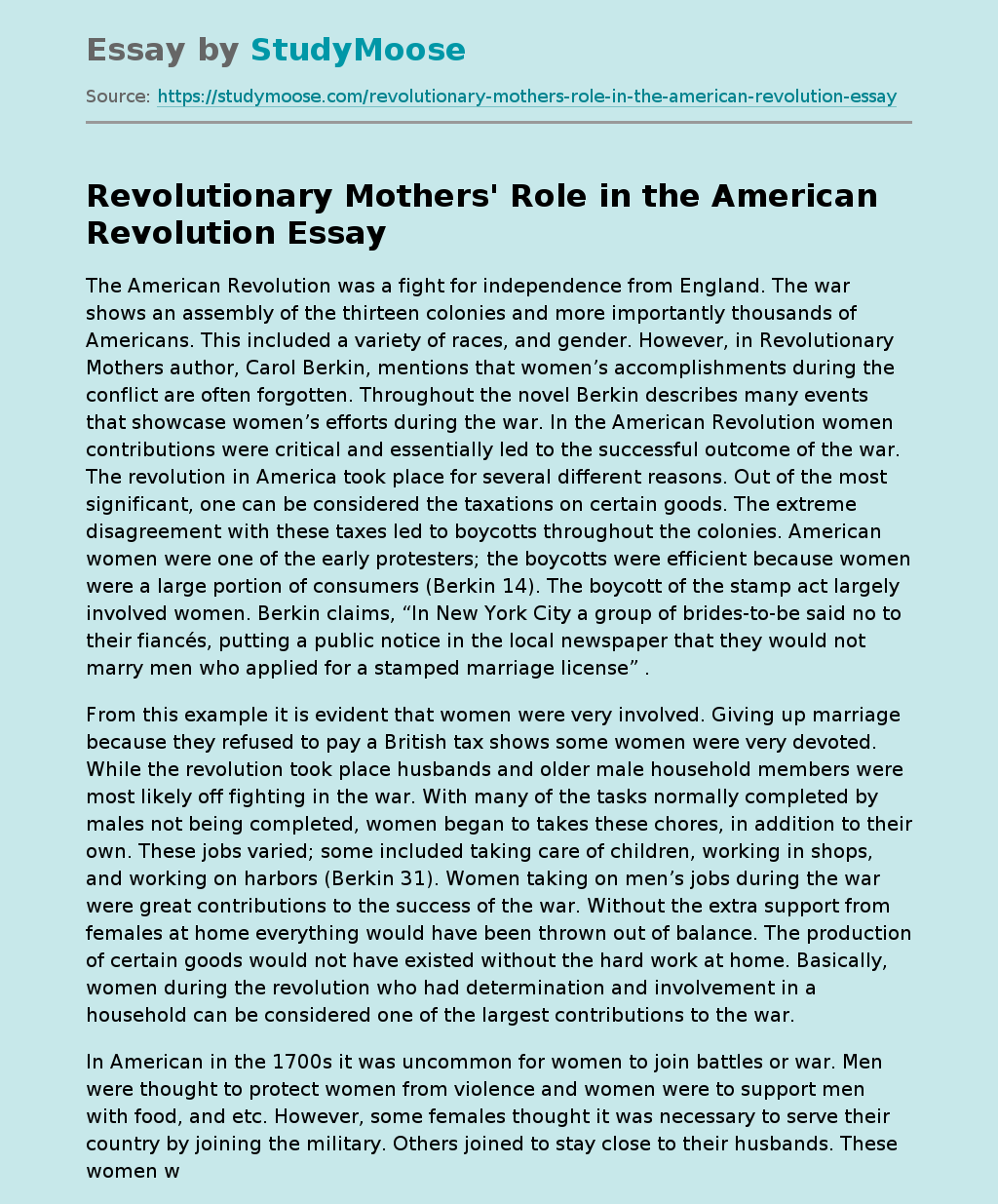