Revision of Date of Completion of the Project

Don't use plagiarized sources. Get your custom essay on
“ Revision of Date of Completion of the Project ”
Get custom paper
NEW! smart matching with writer

1 are covered in section 6, but have different consequences. One such issue is how the different contracts deal with adverse weather effects on works during construction period.

While the NEC contract states the effects of weather on the works as a compensation event under clause 60. 1. 13, where a weather measurement is recorded during a calendar month, before the completion date for the whole of works and at the place stated in the contract data, the weather event must occur less frequently than once in ten years to be a compensation event.

This could mean that should this occur the contractor is due compensation for any costs incurred and a revision of completion time. While the JBCC deals with weather in a different way. In clause 29. states the circumstances where the contractor is entitled to a revision of the completion date but where the principal agent shall not adjust the contract value, are the delays to practical completion caused by various events. One such event, stated in clause 29. 1. 1 is the adverse effects of weather conditions.

This implies that the contractor can not claim for adjustment to contract value due to adverse weather conditions like in the NEC contract. This is one less compensation event that will need to be budgeted for under the JBCC agreement. Another difference in this is under clause 60. 9 of the NEC contract which covers events neither party could account for or prevent which stops the contractor continuing works and is not one of the stated compensation events. While this is covered in the JBCC under clause 29. 1. 4 as an event that neither party could prevent also, it only allows the contractor a revision of date of completion without a revaluation of the project. The JBCC recognizes some events as requiring compensation and others not, while the NEC all the events are seen as compensation events which will require the employer to pay the contractor more money.

If the project manger does decide that there are grounds for the claim he notifies the contractor to submit a quotations for the claim. Should the project manager fail to reply the contractor within a week or a longer time period that is agreed upon by both parties, then the claim is viewed to have been accepted by the project manager. The contractor is the free to submit quotations for the claim. While in the JBCC the process is similar, and is covered under clause 29. which gives the principal agent 15 working days of receiving the claim to grant or refuse the working days claimed or revaluation of contract value depending on the basis of the claim. During which time the principal agent shall determine the revised date of practical completion and identify each circumstance and relevant sub-clause and for each event grant or deny the contractors claim. The principal agent must also supply reasons for the decisions he or she has made. But while in the NEC no response by the project manager, the claim is deemed to have been accepted, in the JBCC it is assumed that the claim has been rejected.

This is sated under clause 29. 8, which provides certain cover for the employer should there be a mishap and the principal agent is unable to reply the contractor, unlike in the NEC. In essence the JBCC contract is the better contract on managing the cost of the project along with time constraints. The contract clearly states the events which if they do occur, will require revision of the date of practical completion and also which events will require both a revision of the date and revaluation of the project.

While under the NEC contract the events listed are events that can all be claimed for money by the contractor, which may lead to the employer having to set aside a greater budget for contingencies because of the number of items listed that can be claimed as a compensation event. The better contract that would ease the client’s worries about budget and time constraints is the JBCC principal agreement.

Revision of Date of Completion of the Project. (2018, Oct 04). Retrieved from https://studymoose.com/revision-of-date-of-completion-of-the-project-essay 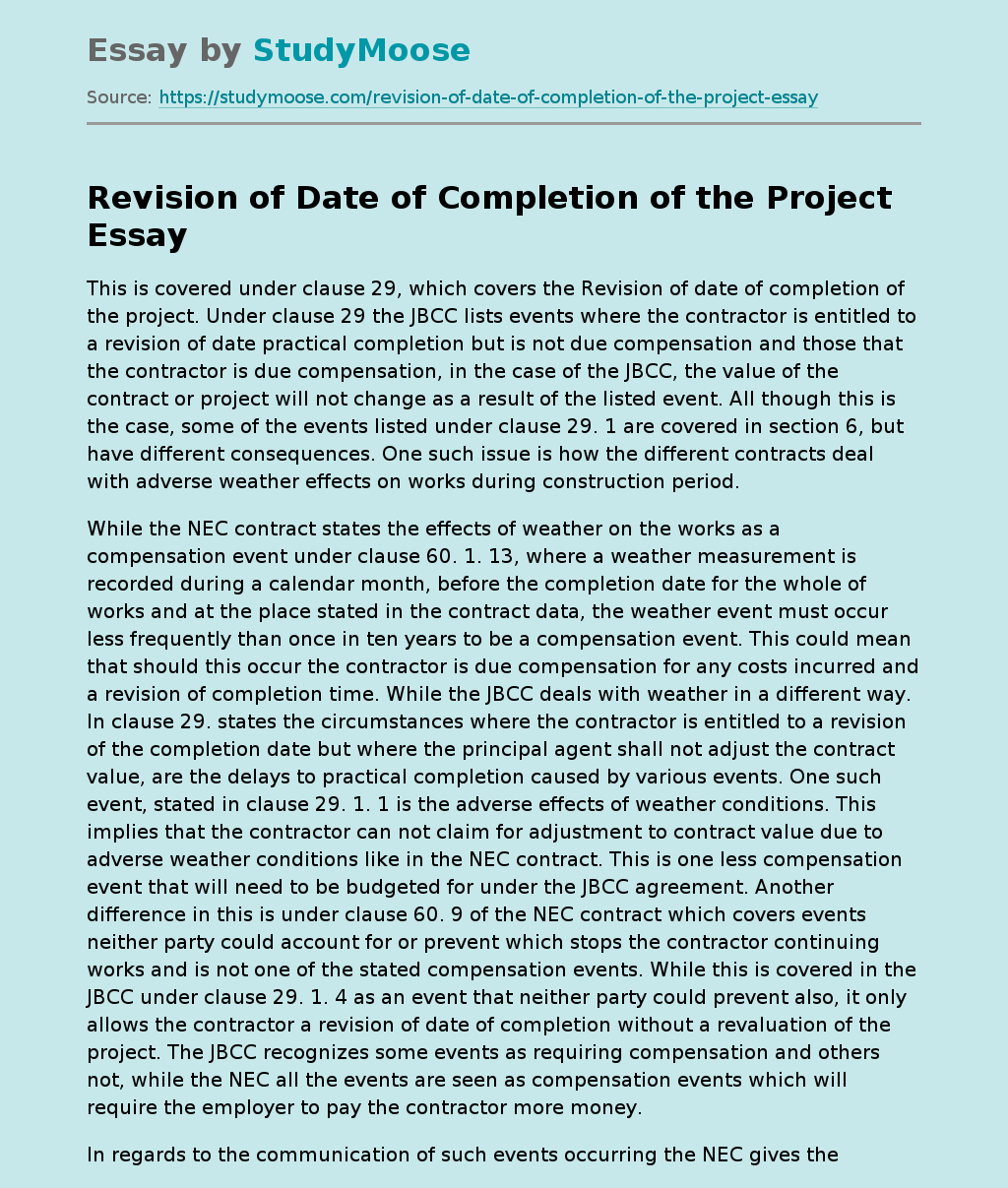