That documentary was quite intriguing especially the thing about Saturnina and her uncle Jose Maria.It got me thinking for an hour or two because if it was true it would be a disgrace to the family. The events links together; Saturnina got pregnant, her mother, Theodora took her on a long vacation and then they’ve returned with Soledad the baby that Theodora claimed to hers and Soledad was meztisa just like Jose Maria. Some questions run through my mind like how did that happen? Was it planned?does Theodora did not raised saturnina like the way she have raised rizal?.

Don't use plagiarized sources.
Get Your Custom Essay on Review on ang lihim ng pamilya rizal Just from $13,9/Page

Another interesting issue is that the Alonzo family was a bastard because Theodora’s mother, Brigada Quintos was not a legal wife of her father,Lorenzo and the only legal child was Jose Maria. It was cleared to me why Rizal did not live in the alonzo mansion.

Also, that’s why the Alberto mansion wasn’t recognized as a landmark because family Rizal wasn’t really connected to the mansion.

Today the Alberto ancestral Mansion in Biñan laguna is being torn piece by piece for it will be moved to another location. Many people are against it because that is the house that Theodora grew with and it should be treated as a national landmark. I’m against it too because Theodora was an important person in history and she’s the one who mold Rizal into what he’d become.

Despite the fact that Theodora wasn’t a legal child, she is still one of the people that have a right to it. The mansion is full of Filipino history and to be destroyed just for a foreign coffee shop? That’s not right. At the end of the documentary, the most important thing I’ve learned is everyone can be a hero. You don’t need to have a good family background; you just need to prove yourself worthy, care for your country and countrymen just like our national hero. 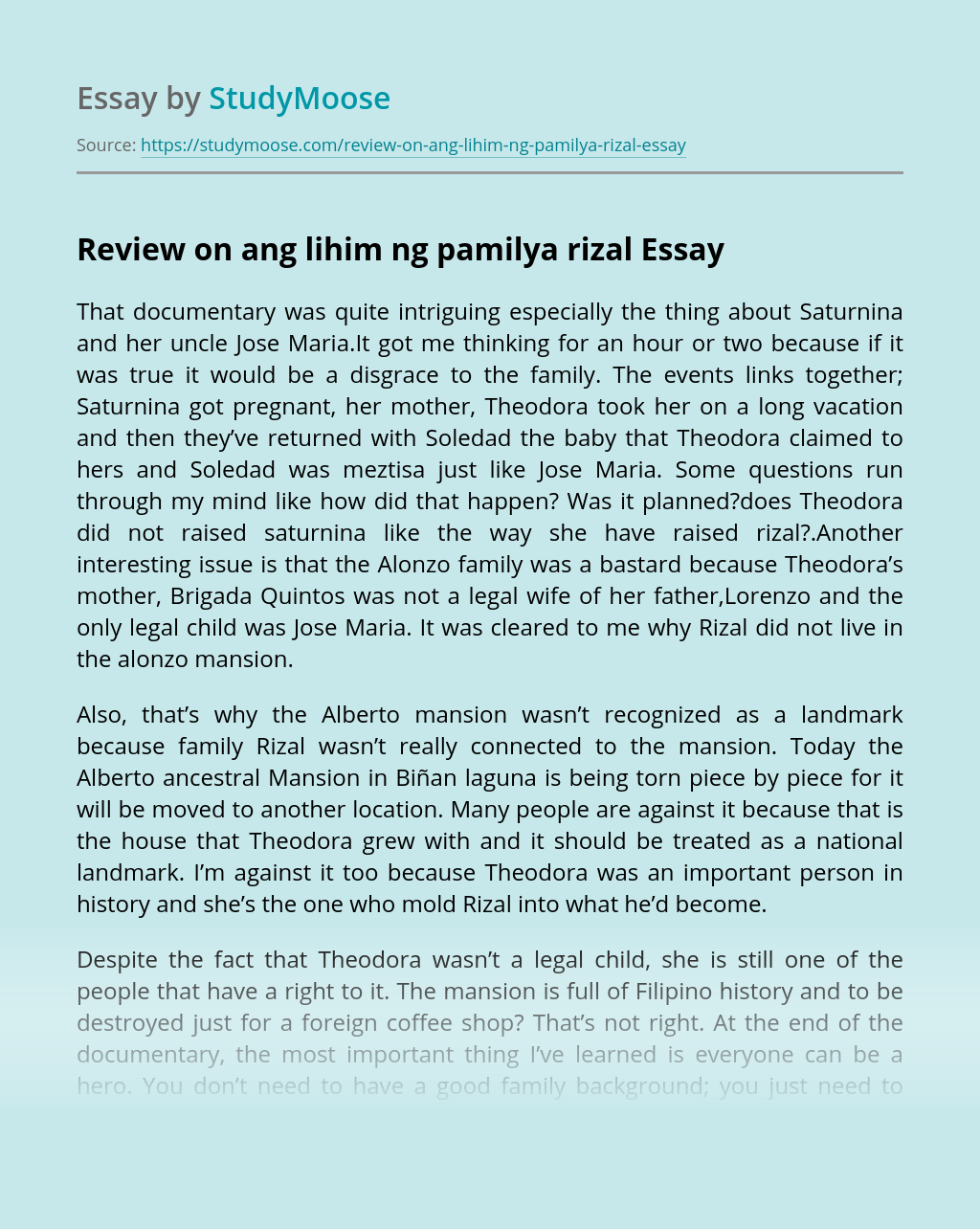 A good speech for an elementary graduation would depend on who is going to be doing the speaking. For a teacher, you’ll want to make sure you thank the students for all of their hard work and wish them the best in the next grade they move up to. For kids, they can thank their... VIEW ESSAY

Examine the Marxist contribution to our understanding of the family The Marxists society view family through the eyes of capitalism and that the proletariat (the working class) solely benefit the bourgeoisie (the ruling class), whereas a functionalists perspective of family is that they should benefit both society and individual members of the family, however, Marists... VIEW ESSAY

The short story “The Moths” by Helena Maria ViraMontes is the story of a Latina granddaughter reminiscing about her relationships between herself and family, most specifically with her grandmother, when the narrator was a teenage girl. The narrator speaks about the indifference she felt among her sisters because she feels she was not pretty enough... VIEW ESSAY

A Man Named Dave, by Dave Pelzer is the story of hope and eventual love and how a child called “It” finally found himself as a man free at last, after early childhood experiences as the son of a brutal, alcoholic mother. When his father is dying of cancer, Dave attempts to reestablish contact with... VIEW ESSAY