The short story has a 3rd person narrator, you can see that, because the narrator does not say “I did” and phrases like that. The narrator is also unlimited, meaning that he/she can move insight all the characters heads unlimitedly, although we practically only hear Myrna’s thoughts and her feelings. The short story is narrated in past tense.

You can see that on the verbs, there are no verbs that are in present form, only verbs in past tense, except for direct speech. The short story takes place in America.

But she moved away from Buddy when Kenny had just turned six. Then when Kenny went to jail, Myrna moved again, into an apartment. The short story stretches over a couple of days, because we start with hearing about Kenny coming home, at some point of the day he then leaves, to go check out the old neighbourhood, it becomes evening when he gets back.

The next morning Kenny brings Myrna breakfast, she then decides to stay in bed for the day, and in the evening on the second day she packs up her suitcase. You read some flashbacks of Myrna’s in the short story, or you could also just call them memories. Because when Kenny comes home, it starts a chain reaction of memories or flash backs in Myrna’s head. She had gotten used to not thinking much about the horrible reason why Kenny got locked up, but when she sees him again, she starts thinking about it. One of the themes in the short story is ‘trust in God’.

I believe that the theme ‘trust in God’ is in the short story, because when Myrna does not understand why Kenny raped Crystal Roberts, and Kenny gets sent to jail, Myrna turns to God for some answers. Myrna starts regularly attending church, and praying at a crucifix when she is not able to get to church. When people turn to God, and they have not extremely believed at start, it is most likely because they have some sort of factor in their life they cannot explain themselves and therefore turns to God to get the unexplainable answers.

I believe this is why Myrna starts being a believer, when Kenny goes to prison. She has no idea why, Kenny raped Crystal Roberts, and has also no idea, how he could turn out doing something like that. Therefore she decides to turn to God, to try to get her brain around the concept, of her son being a rapist. She finds comfort in saying ‘It is the will of God’ and phrases like that, because when she says that God meant for Kenny to be a rapist, she does not have to figure out the real reason, and not confront Kenny with her questions, and make him answer them.

It is like trying to pass on the crap, meaning that she passes on her and Kenny’s problems to God, and relying on him to make them better. In the end of the short story where Myrna decides not to bring the crucifix, it is like she gives up on the whole God thing, and faces her problem instead of trying to make them go away. Leaving the crucifix behind means that Myrna gets an eye-opener by understanding that God is not supposed to fix her problems, but she must do it herself. Another theme in the short story is ‘rape’.

It is pretty obvious why there is a theme called ‘rape’, but as you say ‘don’t read a book by its cover’, I write this because I think there is more to this rape than meets the eye. I do think that Kenny raped Crystal Roberts, but you never get to know exactly why he did this. A violent thing like a rape is not something you just get a feeling of doing all of the sudden, there are signs leading up to the rape. I do not think Myrna saw any of these signs, and if she did she clearly ignored them.

When a person decides to rape someone, the decision most of the times has its roots in the persons past. We hear in the short story that Kenny watched when Buddy abused Myrna, when he was a child. That can be a huge factor in why Kenny raped Crystal Roberts. If a child sees violent behaviour in a young age, or grows up with that kind of behaviour around, the child will see this as normal behaviour and be maladjusted. This is what probably happened to Kenny, though Myrna did not see this, perhaps because she did not know that this could happen, or that when Buddy abused her, it would affect Kenny.

Luckily she left Buddy, but at that time the damage had already happened in Kenny’s head. A theme in the short story is also ‘breaking trust’. The broken trust in the short story is the trust between Myrna and Kenny, between mother and son. Myrna gets very disappointed when Kenny rapes Crystal Roberts, one of the reasons is of course because she does not understand why he could do it. But she also gets disappointed because she does not think he did this horrible thing, and if he had just told a better lie to the police he would have had a better case.

I believe though that Myrna would not be able to live with herself knowing that Kenny raped a girl, and did not get some sort of punishment, it would probably end up with her punishing him the rest of her days, or punishing herself, for letting him lie. When she got as depressed as she got, just because he went to jail, she would have gotten even more depressed if she knew he did it, and he did not go to prison. Some of the broken trust comes from when Myrna wishes that Kenny was never born, of course Kenny never finds out that she makes that wish, but Myrna knows and that makes it even harder for her, to have him in her apartment.

She thinks that if she makes Kenny leave, it is more like he was never born. There are a lot of different symbols in the text. A symbol in the text is the spilled salt. The spilled salt is in the title. Kenny also spills some salt when he eats eggs and bacon. The spilled salt is a symbol for Kenny and Myrna’s spilled relationship. Myrna gets irritated when Kenny spills salt on the table because it makes her believe he does not think there are any spilled relations. 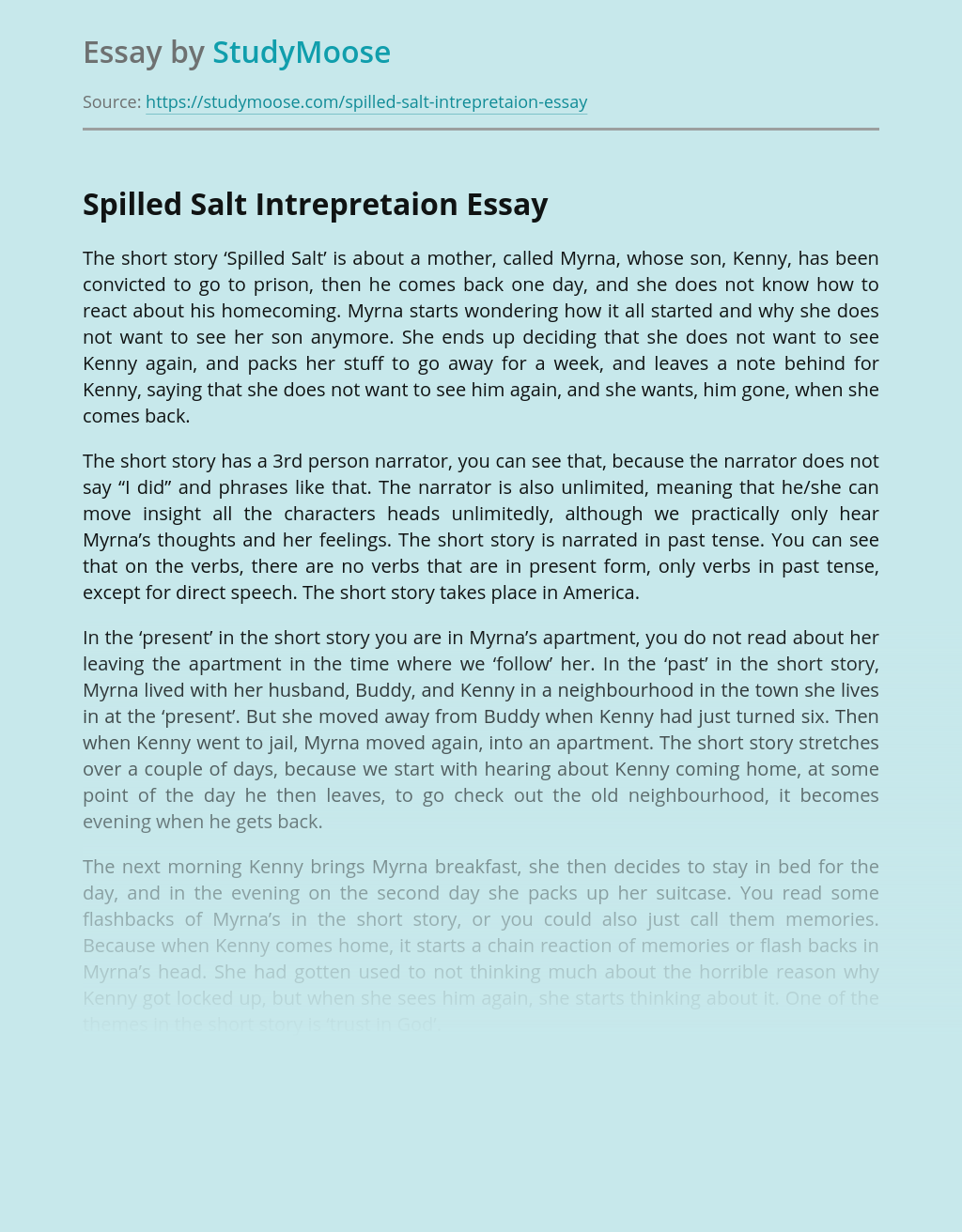 Review On “Gaston” by William Saroyan

The short story “Gaston” by William Saroyan is a creative story that portrays the better parts of life of a torn family. The father and the daughter in the story are spending quality bonding time during the frame of the story. What began as just the simple act of a meal of peaches turned into...

Get Essay
"The Revolt of 'Mother'" by Mary Eleanor Wilkins Freeman

“Everyday Use” is a short story by “Alice Walker”, it is a disdainful short story. A story about two sisters and a mom, that the two girls are totally different. Also teaching to stand up for what you want. This story is about a mom and a girl called Maggie that they live alone because...

Everything That Rises Must Converge by Flannery O'Connor

How old generations can see the people? There is a good theme of integrations in the short story that was written by Flannery O’Conner’s Everything That Rises Must Converge and it published in 1965. The story is about a young man (Julian) who represents the new generation and his mother who represent the old generation....

Essay about "Drown" by Junot Diaz

The book Drown, by Junot Diaz is a book that involves many trouble, and drama in Yunior’s life. What happens to an innocent child who doesn’t grow up with a father, and that has to hustle to survive? This book should be studied by any reader, whose life like many others’, grew up without the...

"The Charmer" by Budge Wilson

The Charmer is a short story written by Budge Wilson, which fills nine pages total. The story is told through first person narrative and it involves two timelines, with the priority on a flashback into the childhood of the main character, Winniefred. She starts the story by introducing herself, and mentions a journey of growth...