Review of related literature about jollibee

INTRODUCTION
BACKGROUND OF THE STUDY

The original owner Tony Tan and his family opened a Magnolia Ice Cream parlor in Cubao, Quezon city in 1975.In 1978, he and his siblings engaged the services of a management consultant, Manuel C. Lumba, who shifted the business focus from ice cream to hot dogs after his studies showed a much larger market waiting to be served. Lumba was Tan’s last business and management mentor. Throughout its three decade history, Jollibee became a success enjoying rapid growth.

Don't use plagiarized sources. Get your custom essay on
“ Review of related literature about jollibee ”
Get custom paper
NEW! smart matching with writer

The chain opened successful milestone stores in the following years: Its 100th branch in Davao on 1991;  The same month, Jollibee signed a deal to acquire 55 percent of China’s Guangxi San Ping Wang Food and Beverage Management Co. Ltd., operators of the San Pin Wang beef noodle business for 30 million RMB. On October 2011, Jollibee acquired a 54% stake in BK Titans, Inc., the sole franchisee of Burger King in the Philippines. In 2011, Jollibee opened 260 new stores, of which 167 were in the Philippines led by Mang Inasal (86) and Jollibee (40).

The same year, Jollibee closed Manong Pepe foodchain in favor of Mang Inasal, and sold Délifrance to CaféFrance. Overseas, Jollibee opened 93 stores, led by Yonghe King in China (70) and Jollibee Vietnam (11). In 2013, Jollibee opened its first store in Virginia Beach, Virginia as well as in Houston, Texas. The restaurant plans to expand to Toronto in Canada, Malaysia and Indonesia. They also plan to expand throughout the Southern United States such as Atlanta, HYPERLINK “http://en.

Jollibee is an American-style fast food restaurant with Filipino-influenced dishes specializing in burgers, spaghetti, chicken and some local Filipino dishes. In the Philippines, Jollibee serves Coca-Cola products for its beverages; in overseas markets, the chain serves Pepsi products. Jollibee started with five branches in 1978 and has grown to a strong network of a total of 801 stores in the country, and 96 stores internationally. In total, Jollibee has 896 stores worldwide as of November 2013. It is the largest fast food chain in the country with international locations in Brunei, Hong Kong, Indonesia, Kuwait, Malaysia, Qatar, Saudi Arabia, Singapore, Vietnam, the United States, and Canada. JFC is planning to expand Jollibee to other markets like Europe. Jollibee Chicken Joy Potential (Total Market) in last 25 years, Chicken Joy has evolved from just plain chicken product to a strong and well-loved brand in the QSR (quick service restaurant) industry.

It reached the level of having an established emotional affinity among Filipinos given its constancy as a functional product and the heritage that it continuously imparts in every household. Primary Target Moms and dads with kids (0-12 years old), across socio-eco classes, chicken eaters positioning a uniquely delicious total sensory experience enjoyed by the whole family: Crispylicious, juicylicious, amoy delicious, and gravylicious, satisfies not only your family’s craving for a delicious chicken meal but also your family’s needs for bonding moments. Also, Jollibee, the country’s leading fast-food chain, was cited as one of the top 10 international fast-food restaurants in the United States. US-based food and drink website The Daily Meal listed Jollibee as among the favorite foreign food chains in the country.

The website described Jollibee as “hugely popular in the Philippines, and has locations scattered around the US, largely in California. Aside from burgers, they offer fried chicken, spaghetti, noodles, and unique breakfast dishes like Spam, beef tenders, or sweet pork with rice.” The Daily Meal draws over eight million unique visitors per month and ranks as one of the fastest-growing content sites of all time. The food and drink website also produces annual reports, including the 50 Most Powerful People in Food, 101 Best Restaurants in America and 150 Best Bars in America.

Review of related literature about jollibee. (2016, May 27). Retrieved from https://studymoose.com/review-of-related-literature-about-jollibee-essay 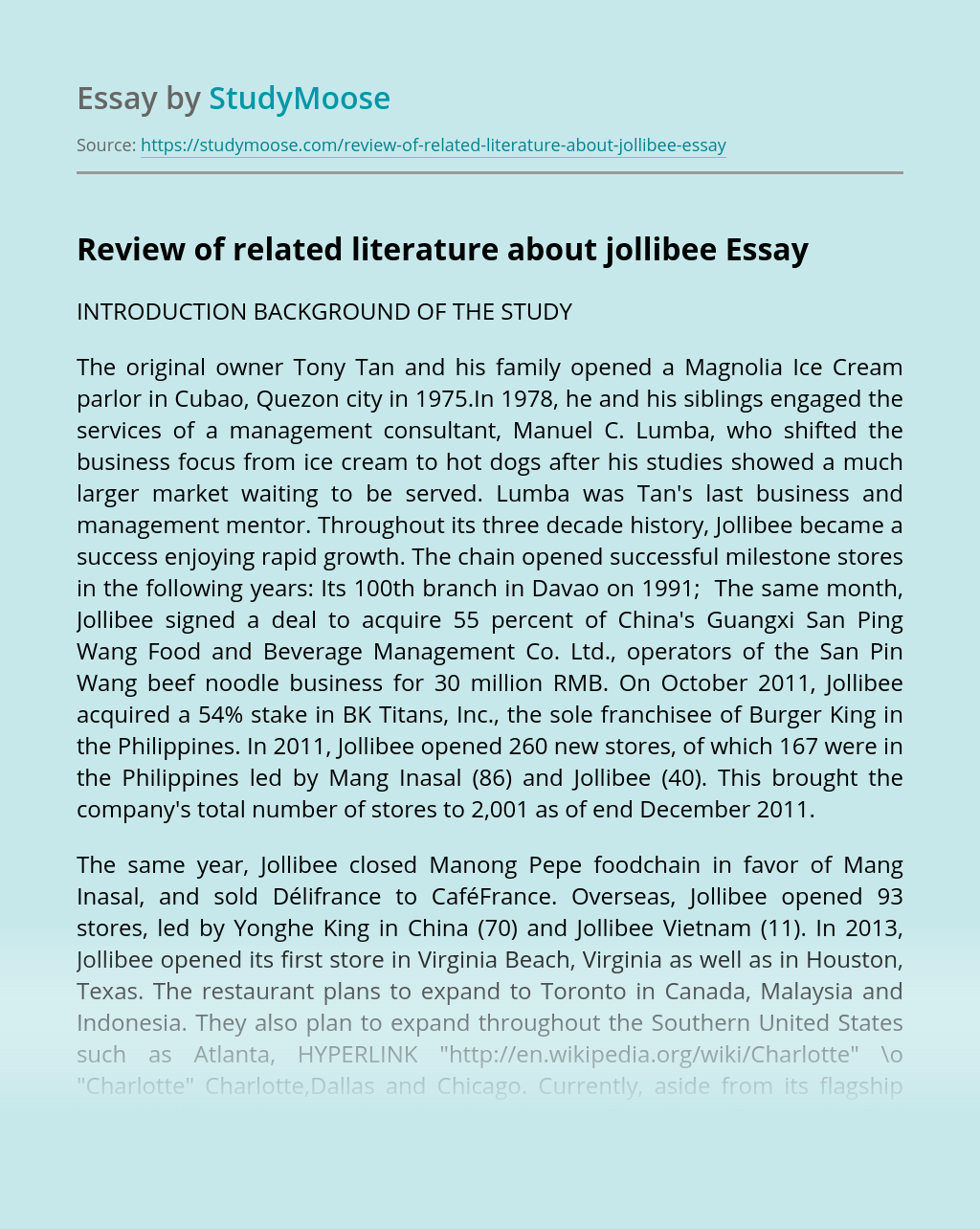