Review of Human Nature in Voltaire and Swift

Satire is defined as individual follies and vices found in human being through ridicule and irony. The purpose of satire is not to humour but to bring improvement through verbal attack by using wit. One of the common features of satire is irony and sarcasm which has been used by authors for centuries including Swift and Voltaire to show the shortcoming of human nature. Swift was born and educated in Ireland and spent his early life in England. His career started with the “A Tale of Tub” and “The Battle of Books”; where he satirized the human weakness in various ways.

In “A Tale of Tub”, he mocks his countrymen revealing the shallowness of philosophers and writers of his time. He also shows how the philosophers and writers are used by ruling elite to achieve their agenda which was betrayal from truth and honour. However it was “Gulliver Travel”, where Swift has openly mocked the human nature. He particularly observes human nature in a very disturbing way for which many critics called him misanthrope.

The book portrays Lilliput (Britain) lacking in democracy; where highest position is given to the one who can jump high (instead of merit and honesty).

He also shows, how court positions were filled by personal favour rather than offering to the most worthy candidate. He reveals the social pretension and weakness of human institution in his times. For example he talks about the fall of minister in Lilliput because he could not please the King; is actually replication of his life.

He also fell out of favour because he could also not please the King. In the Gulliver’s Travel, he also criticizes the Laputa intellectuals, which is indirect criticism of Royal Society of England that Swift considered nothing more than a club for abstract ideas.

Swift considers such kind of writers and scholars as parasite on society who waste time and money of the society without providing any added benefit. Swift divided human nature into two parts; the reason and benevolence and the selfish appetite which he has left for yahoo. He analysed the human nature and shows that its human vanity that prevents him to detect flaw and improvement. Swift wants its audience to be shocked by his revelation of human nature, but the purpose is improvement by exposing follies.

Voltaire on the other hand was extreme in his views about human nature; as his world view was more skeptical. Being an atheist to the core, he was against the religious fundamentalism; however he advocated the social and religious tolerance. His true portrayal of human nature is depicted in Candide that details various characters including liars, traitors, killers, and hypocrites. However his view is not an outrage like Swift, but crude truth told with manners. He explains that the human societies are comprised of puppet like characters that are incredible and improbable committing follies.

Voltaire captures this selfishness in human nature through parody showing human being imperfection. His views are similar to Swift; however his manner is not as crud as Swift. Thus we can conclude that aim of both Swift and Voltaire was to look at man as an imperfect being; which commits follies ; however these follies can be improved, if man is willing to look beyond his vanity.

Review of Human Nature in Voltaire and Swift. (2017, May 08). Retrieved from https://studymoose.com/review-of-human-nature-in-voltaire-and-swift-essay 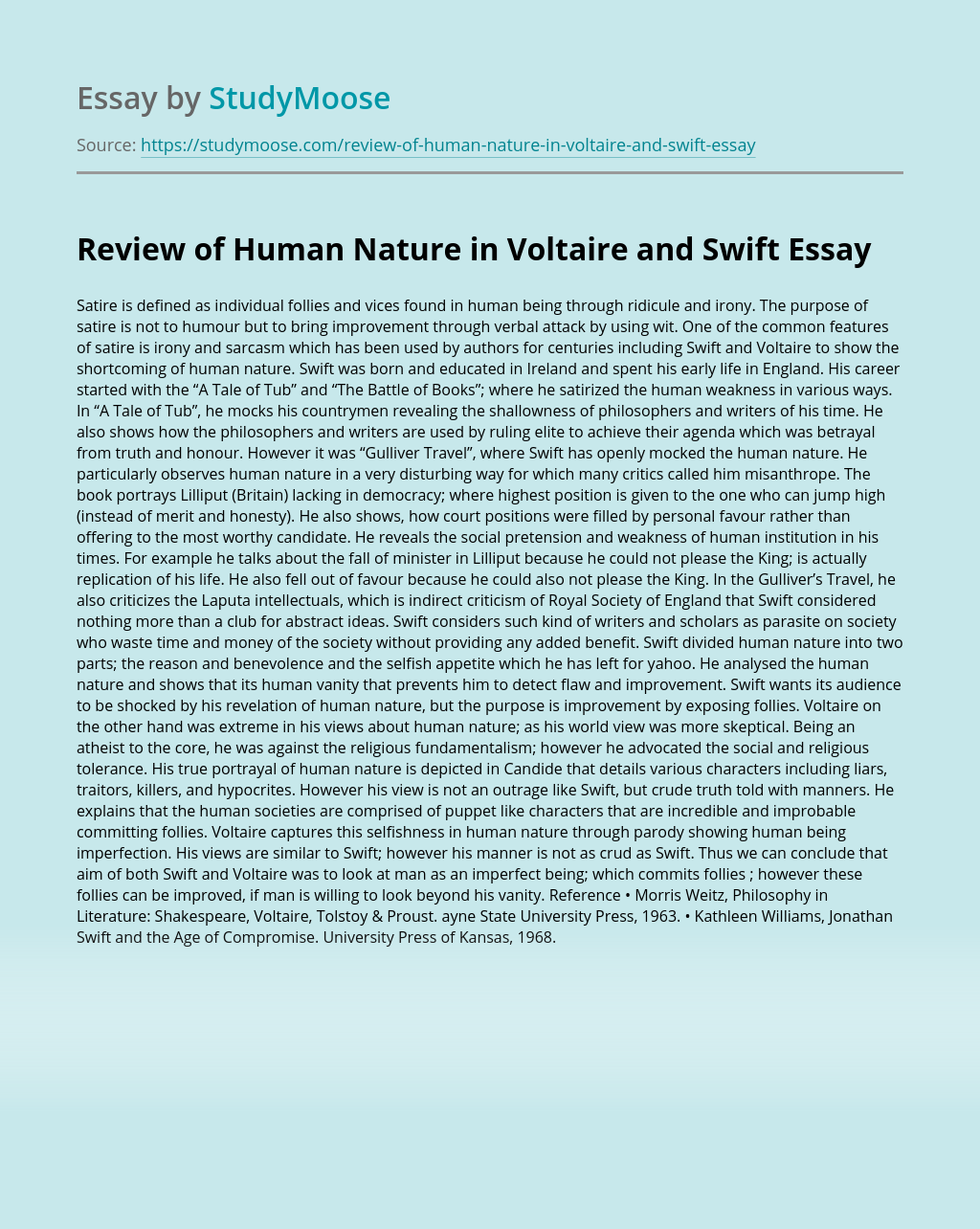 Human Nature in the Destructors

Graham Greene had summarized the conflicts in a society through a representation of teenage children during the post-war era, in his famous short story, “The Destructors”. The setting of the story happened in blitzkrieg London after World War II ended. The characters are mainly teenage boys who had established a gang known as Wormsley Common...

Get Essay
The Daodejing of Laozi

The Daodejing of Laozi is a book of poetry pertaining to Chinese philosophy. The Daodejing is most often translated into meaning “the Classic of the Way and its Virtue.” Its text is full of religious verses that are often compared to the Bible. Throughout the text, the Daodejing encounters a variety of topics including: dao,...

Macbeth is a play that examines human nature. During the play there is a significant amount of emphasis on the different attributes and sides of human nature. The play demonstrates that everyone has the ability to do good or evil by what choices they make and what the ramifications of these actions are, decisions are...

The Elizabethans thought, or pretended to think, that the natural world reflected a hierarchy that mirrored good federal government and stable monarchy. Even our scientific age discuss “laws of nature” and “great federal government through excellent laws.” Shakespeare’s age contrasted “nature” and art, just as one can think about an important “humanity” contrasted with culture....

Hegel’s concept of the “Absolute Idea” claims that there is a universal and ideal standard that is continuously being revealed throughout history, in various forms of human expression. The Absolute Idea can be interpreted as God, nature, spirit, or reality. With art, there is no such thing as “Art for Art’s sake” because art is...

Johann Wolfgang von Goethe is most likely the most well-known German author. He has typically been called “the last true polymath to walk the earth”. Although he was not born there, he invested the majority of his life in Weimar in the former East Germany. Write a quick term paper in English (500 words), ensure...