Review of Book "Waging the War on Secondhand Smoke"

I have always taken smoke-free aircraft and smoke-free indoor spaces for granted. However, reading James L. Repace’s Enemy No. 1: Waging the War on Secondhand Smoke made me realise that there has been fights for the right to clean indoor air, which I had previously been unaware of. In fact, only until very recently, indoor smoking was unregulated, i.e., non-smokers had to put up with the smoke, even if they had allergies or medical conditions that were aggravated by it.

Don't use plagiarized sources. Get your custom essay on
“ Review of Book “Waging the War on Secondhand Smoke” ”
Get custom paper
NEW! smart matching with writer

In this book, Repace tells of his tough but rewarding journey towards getting the American government and large tobacco companies to recognise and acknowledge the bodily harm caused to non-smokers by secondhand smoke.

Weighing in at a whopping 1000 pages, this book is definitely not for the faint of heart. Repace has engaged in comprehensive, extensive, and groundbreaking research on the effects of secondhand smoke, and he has woven this research into the fabric of his autobiographical narrative to allow us, the readers, to better understand how we are able to enjoy clean air today.

What I appreciate most about this book is Repace’s enthusiasm for his topic of choice his motivation and excitement come through most clearly when he tells stories about how he overcame the obstacles set in his path by large tobacco companies. These companies had sought to shut down his research, due to the threat to their profits if it were established that secondhand smoke was harmful and could cause cancer.

In addition, Repace has also peppered his book with little anecdotes about his everyday life as a scientist: once, due to his imbibing of alcohol, he used the wrong solvent in the lab, nearly causing a large-scale accident.

Whilst portrayed in a humourous way, it also contained an important lesson on lab safety. In this sense, it also helped me to understand what Repace is like as an individual and to relate to him better.

However, the book still has its shortcomings. Marketed as an “understandable encyclopaedic narrative for the professionally trained scientist, the ecologically minded individual, and the long-suffering layperson”, it is my opinion that Repace has bitten off more than he can chew. In other words, Repace should have simply focused on one target audience (out of the three mentioned) and geared his narrative to better appeal to that chosen group.

What I mean by this is that with Repace’s attempt to cater to these vastly different target audiences in a single book, Enemy No. 1: Waging the War on Secondhand Smoke inevitably loses much of its focus and organisation. To illustrate, for the “professionally trained scientist”, the book does not contain enough scientific evidence (e.g., citations and experiment results) to prove the research claims, since Repace has to pare down the science portion in order for the “long-suffering layperson” to maintain his/her interest in the book. Conversely, for the “long-suffering layperson”, there remains a massive amount of scientific jargon and various scientific hypotheses, which would certainly be difficult for someone with no prior knowledge of research methodologies to comprehend.

There are also a couple of minor grammar and punctuation errors, such as missing hyphens and wrongly inserted commas, but these did not take away much from the reading flow. Therefore, I rate James L. Repace’s Enemy No. 1: Waging the War on Secondhand Smoke 2 out of 4 stars, which is mainly because of the serious lack of streamlining that unavoidably comes with trying to cater to different target groups. Nonetheless, this is not to say that Repace’s book is without potential this potential is only unrealised. In the book’s current form, I am only able to recommend it to people who are immensely interested in the tobacco industry and the history of the war waged for the right to clean indoor air.

Review of Book "Waging the War on Secondhand Smoke". (2021, Feb 08). Retrieved from https://studymoose.com/review-of-book-waging-the-war-on-secondhand-smoke-essay 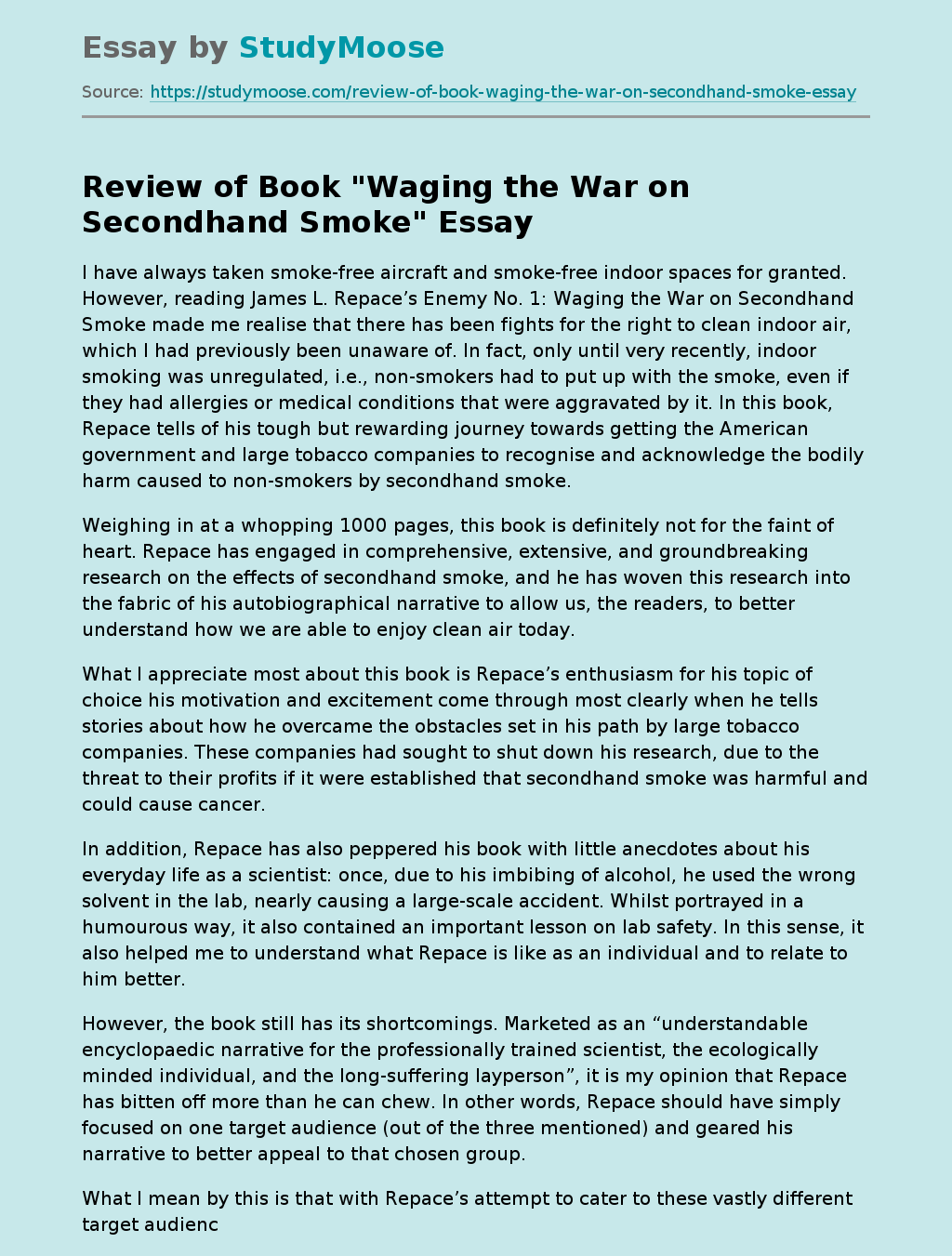