1) In late 2000, Lucent announced that revenues would be adjusted downwards by $679m as a result of revenue recognition problems. Yet the firm’s market capitalization plummeted by $24.7bn. Why do you think the market reacted so negatively to Lucent’s announcements of the problems?

The large drop in market capitalization is probably due to several factors. Historically, Lucent had successfully met analysts’ projections for 15 consecutive quarters before announcing, in January 2000, a major shortfall in profits relative to previous expectations. In June, the quarterly balance sheet reported an operating loss of $301m (for the first time since 1998) while warning of weaker profits in Q4.

Don't use plagiarized sources. Get your custom essay on
“ Revenue-Recognition Problems in the Communications Equipment Industry ”
Get custom paper
NEW! smart matching with writer

In addition, the revenue recognition issues announced by the new CEO appointed in October were surely perceived as an indication that Lucent’s management was managing revenues and therefore a possible cause of a future fall in revenues.

This led investors to modify their earnings expectations in light of the revenue-recognition problems faced by the firm. Since a company’s share price reflects forecasts of future cash flows, and Lucent’s Q3 and Q4 revenues were substantially written-down, investors would rationally expect future earnings to be affected as well.

In an efficient market environment, the $24.7bn in lost market capitalization would equal the discounted value of these expected cash flows. However, it is also likely that the repeated missed expectations caused an overreaction by investors, as the company was forced to revise its revenues downward two times over the span of two quarters. This probably raised fears in the market of more widespread problems with the firm’s accounting practices.

It should also be kept in mind that the Internet bubble had just burst and a technology related company announcing an operating loss and lower revenues could easily cause a panic selloff among investors, as typically happens when a speculative bubble bursts.

2) What are the specific revenue recognition problems faced by Lucent? On December 22, 2000, Lucent announced a $679m downward adjustment in revenues of their fourth-quarter financial statement from September 2000. There were four different reasons for the adjustment.

First of all, Lucent stated $125m of recorded sales that did not meet the company’s revenuerecognition rules. These revenues were included in the financial statement due to “misleading documentation and incomplete communications between a sales team and the financial organization”.

Additionally, Lucent sold $452m worth of equipment to system integrators and distributors and recorded them as revenues. In fact, the products were not passed on to the customers, because of their weakened financial condition, and Lucent had already verbally agreed to take back the equipment. Therefore, the sales could not be accounted as revenues. Thirdly, sales teams had verbally offered credits to customers worth $74m and booked them as revenue in order to boost the fourth-quarter numbers. As the credits were meant for use at a later date without an actual sale of equipment taking place, these could not be accounted as revenues in the fourth-quarter.

Finally, sold equipment worth $28m had not been completely shipped, leaving the service incomplete. Since this violated the first revenue recognition criteria “The firm has performed all the services or conveyed the asset to the buyer”, recognition of these revenues is not in line with regulation.

3) What financial statement adjustments will Lucent have to make to correct the revenue recognition problems announced in late 2000?
In our treatment of the accounting figures we found it necessary to make assumptions relating to tax rates and COGS, as the information is not given directly. In deciding which tax rate to use for the adjustments we have two obvious alternatives; either assume a corporate tax rate of 35%, or calculate the average tax rate based on the presented financial statement. However, due to certain revenues and expenses being non-taxable we have opted to discard the average tax rate as a suitable estimate, and assumed a corporate tax rate of 35%.

In relation to the Cost of Goods Sold, Lucent faces the problem that some of their goods are tangible (communications equipment) while some are intangible (software licenses, services etc.). We are aware of the fact that Lucent’s intangible assets are subject to different costs as its

tangible assets, and therefore have to be restated differently. However, we do not know the costs of neither intangible nor tangible assets due to a lack of information and thus assume a representative cost mix that is proportional to total revenues. Hence, we use the average COGS (69% of revenues in Q4, 2000) when we calculate the restatements. In the balance sheet, we treat the physical goods as “inventory”, and intangible goods as “other current assets”.

4) How would you judge whether a firm is likely to face revenue recognition problems? Revenue-recognition problems in Lucent’s case emerge from mismanagement of the financial statements by all parties involved in compiling them. For instance, the initial $125 million adjustment was due to miscommunication between the sales team and the financial organization. The lack of a proper internal reporting organization or of efficient external auditors therefore is a sign of increased risk of revenue misrepresentation. It is also important to mention that the events described in the case occurred before the Sarbanes-Oxley Act was enacted. This means that, at the time, financial statements did not require a seal of approval from top management in order to be published. The fact that these reports were approved and published suggests awareness and involvement of the board of administrators in the revenue-recognition problems. Making CEOs accountable for the financial statements was an important step toward prevention of unwanted accounting practices.

From a broader perspective, companies are constantly subject to the need of reaching – and beating – the market’s profitability expectations. Missing these targets may result in a steep share price fall, especially considering the “herd mentality” that is prevalent during market bubbles. Investors will typically overreact at the first sign of negative news from a company, triggering sharp sell offs in stock, as was the case with Lucent, during the height of the dotcom bubble. Further revenue misrepresentation drivers we can deduce from Lucent’s case are: firstly, firms providing financing solutions to customers may fall into the temptation of using these tools in order to boost their quarterly revenues by granting credits to clients. In fact, computing Lucent’s Account Receivables / Turnover ratio, it is observable that average collection days increase substantially from 1998 (85 days) to 2000 (119 days).

This means that Lucent was selling products extending financing rather than collecting cash. Secondly, when companies rely on a distribution network rather than on direct sale it is easier for them to engineer revenue-boosting activities (e.g. provide distributors with more than what can be sold and take back the equipment later on). Thirdly, relying on big clients accounting for a large percentage of revenues increases may enhance corporate relationships, thus facilitating non-transparent verbal agreements or offbalance-sheet operations (e.g. financing, discounts). In addition, any changes in accounting practices and assumptions accounted for in the income statement should be investigated closer as a possible case of accounting fraud, as in the case of Lucent. In the 1st quarter of fiscal 1999 $1.3bn is booked as a “cumulative effect of accounting change”. This is enough to say that a revenue recognition problem exists, but certainly warrants further investigation.

Finally, incentives of a more general nature to accounting malpractice include regular evaluation of company credit quality by rating agencies, and distorted compensation incentives for management. The former occur at regular intervals, providing incentives for management to “polish” a firm’s balance sheet prior to evaluations by the agencies, while the latter usually involves stock options. Since employees are only allowed to sell their options at certain dates, they have an incentive to push the company’s share price up through accounting manipulation, prior to executing their options.

5) Assess whether any of Lucent’s competitors are likely to face revenue recognition problems in the coming quarters.
Cisco Systems’ multichannel approach to sales and marketing includes a direct sales force to distributors, value-added resellers and system integrators. This could allow them to boost their revenues by selling excessive amounts to distributors close to the end of a quarter and taking the equipment back afterwards. On the other hand, Cisco does not rely on a single client, but has a diversified client base. In addition, the financing that Cisco provides is clearly reported on the balance sheet as noncurrent long-term lease receivables, which clearly differs to Lucent’s approach concerning verbal agreements about credits to clients. Unlike Cisco, Juniper Networks mainly relies on one large customer, WorldCom, who generated 18% of their revenues in 2000.

Thus, they were highly dependent on that client and had most likely build up a close relationship with them, both concerning equipment sales and credit granting. This increases the risk of false revenue recognition due to either channel stuffing or the sale of equipment (meant to be taken back if not sold) close to the end of the quarter. Nortel is mainly a service provider, in fact 82% of its revenues are made up by services. This could be a red flag for revenue-recognition issues as services may have no clear delivery date and thus allow revenue management. In addition, Nortel granted credit to its customers of $5.6bn, of which only $1.5bn had been used. This could mean that Nortel is trying to attract customers by aggressively offering financing. On the other hand, Nortel does not depend on any single client.

We did not find any significant pattern in insiders’ dispositions of their stock options to indicate fraudulent activity, neither for Lucent or any of their competitors. We also closely examined the two key ratios “Account Receivables Turnover” and “Cash Flow Return” for Lucent and its competitors (Juniper Networks has been excluded due to data absence). As can be seen in the following graph all cash flow returns recently started to decline, which could raise concerns with regards to their revenue recognition policy.

In Cisco’s and Nortel’s case one can see that this change is due to a parallel decline in cash flow from operations as well as an increase in sales. However, this movement by itself is not a red flag and could be due to other factors, which calls for a more detailed investigation. We can see that the suspicious decrease in cash flow return is mainly due to a substantial increase in sales and can also be seen in a substantial increase in accounts receivables. Hence, we looked at “accounts receivable turnover” or more precisely “days sales outstanding” and found that the average level over the course of the previous three years stays approximately the same while showing a negative trend for Cisco and even constantly decreased slightly for Nortel. This is a very good sign and means that these two still manage to collect their receivables in a timely manner although sales increase rapidly. Cash Flow Returns should therefore stabilize again in the near future. Lucent’s Account receivables turnover on the other hand, as already elaborated in the previous question, steeply increases. This may indicate Lucent was selling products by extending financing to customers rather than collecting cash since we cannot apply the same argumentation as for Cisco and Nortel in Lucent’s case.

Revenue-Recognition Problems in the Communications Equipment Industry. (2016, May 17). Retrieved from https://studymoose.com/revenue-recognition-problems-in-the-communications-equipment-industry-essay 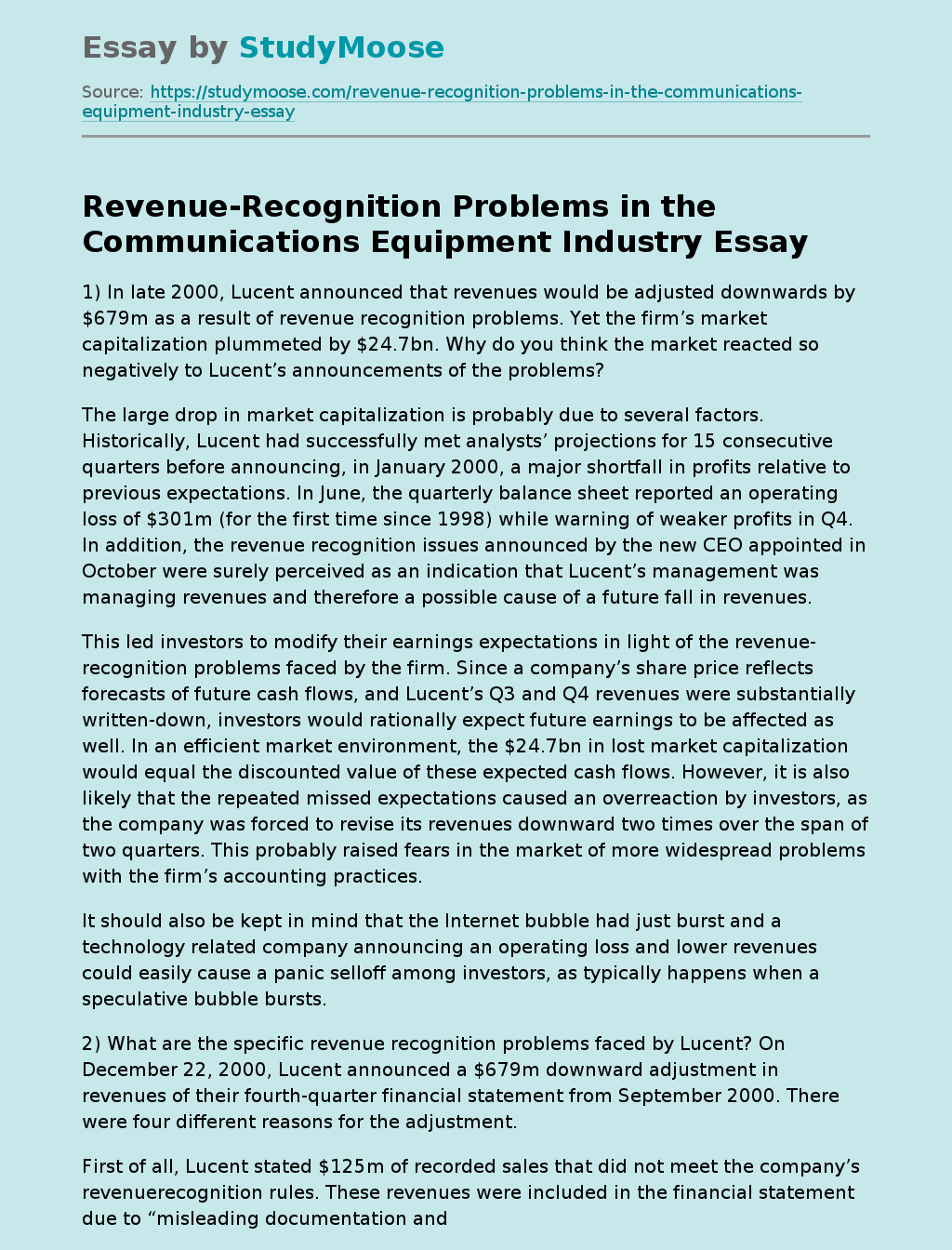