Restructuring the organizational structure at Kimberly-Clark

In 2003,Kimberly-Clark the maker of paper products including Kleenex, Haggis , and Depends, announced it was creating a radical new structure to shore up parts of its business that were performing poorly by restructuring its product into three categories .The categories were” grow,” “sustain,” and “fix”-somewhat unconventional categories. They weren’t devised based on product type, customers, or the geographic location is which Kimberly-Clark sold goods, but instead on the perceived strength of the products themselves.

Background
Kimberly, Clark and company was established in 1872 by four young businessmen, John A.

Turn in your highest-quality paper
Get a qualified writer to help you with
“ Restructuring the organizational structure at Kimberly-Clark ”
Get high-quality paper
NEW! AI matching with writer

Kimberly, Havilah, Babcock, Charles B. Clark, and Frank C. Shattuck. Based in Neenah, Wisconsin, The Company initially manufactured paper, but over the years it began to branch out, broadening into the personal hygiene consumer products area to compete with companies like Procter & Gamble. In 1978,Kimberly-Clark introduced what would become its top seller; Huggies disposable diapers. Huggies were an instant hit and soon became the nation’s number one diaper brand.

Over the course of the next two decades,Kimberly-Clark introduced Depends for adults and training pants for toddlers,and acquired its competitor Scott Paper,a leading maker of toilet paper and paper towels.Today,the merged company sells its products in over 150 countries around the world.In 80 of those countries,it holds the number-one or number-two spot in the marketplace.It has physical operations in 38 countries and employs more than 55.000 employees.

Restructuring Problems
Like many corporate mergers, the merger between Kimberly-Clark and Scott Paper in 1995 didn’t roll out smoothly .

Most of Scott’s senior management team left after the merger,and Kimberly-Clark experienced problems integrating the two companies.The following year,operating income and sales dropped. By the late 1990s,the company’s senior managers had finally worked through the integration challenges of the merger.But the dawn of the twenty-first century brought new challenges.Chief among these was the lack of growth in developed countries for Kimberly-Clark products due to market saturation. To continue to grow,the company had to look to new markets.The company was also losing market share to its fiercest rival,P&G.By introducing a high-end line of pampers in 2002,P&G had been able to capture market share from Huggies. Given the tough competition in the disposable diapers industry,Kimberly-Clark tried to diversity by producing a related product: disposable baby wipes.But these growth plans were upset when Johnson & Johnson,the prominent maker of baby shampoo,launched its own line of baby wipes.

It was within the context of these competitive dynamics that Kimberly-Clark’s senior manager announced their radical reorganization plan in 2003.The “grow” category (brands and sectors growing the fastest) included products such as training pants,household towels and wipes,and Kleenex.The “Sustain” category(brand generating solid returns) included U.S, infant care products and other facial tissue lines. Whereas the “fix” category included products related to European personal care along with the U.S. Professional washroom business.Sales of these products were relatively flat.And although they accounted for about 20 percent of the firms’s total sales,they contibruted only 10 percent of the profits. Kimberly-Clark’s senir managers argued that reorganization would help increase the company’s speed to market,streamline its decision making regarding allocating capital and deliver cost reduction on a sustainable basis.However,simultaneous to the reorganization announcement,Kimberly-Clark announced it had revised its forecast for sales increase down from 6 percent to 8 percent annually to 3 percent to 5 percent.Predictably,shareholders reacted negatively,and Kimberly-Clark’s stock price closed down immediately after the announcements.

Thus,executives began to reconsider the planned changes. Kimberly-Clark eventually presented a new and different organizational structure in early 2004.Rather than organize products by the “grow, sustain , and fix” categories, management announced that it would organize around by personal care, washroom products, and emerging markets.Specifically, management planned to combine the company’s North American and European personal care groups under one organizational unit. The same would happen for products related to the washroom business. In addition, management planned to create an “emerging markets” business unit to maximize the growth of all Kimberly-Clark’s products in Asia, Latin America, and Eastern Europe. As an example of this growth, in 2010 the company announced its first plant in Russia to manufacture Huggies diapers. By 2010, Kimberly-Clarks changes reshaped the company into a consumer product health and hygiene firm. Analysts have reacted well to these changes. In addition, the company announced that its efforts to reduce cost are likely to exceed its initial estimates. The management projected that cost savings could be as high as $450 milliion by the end of 2010. And, management also announced a new plan to reduce up to $500 million more by 2013. Finally, the company is searching for good acquisitions in the health care industry.

Questions..
1. Why would Kimberly-Clark executives restructure the company based on “grown, sustain, and fix” categories? What disadvantages might result from such a structure?
2. Was the organizational structure presented by Kimberly-Clark executives in 2004 better than the first structure proposed? Why or Why not?
3. Are the company’s changes to reshape its identity as a consumer product health care and hygiene company and its cost reduction efforts likely to improve its competitive position relative to P&G? please explain your answer.

Restructuring the organizational structure at Kimberly-Clark. (2016, May 07). Retrieved from https://studymoose.com/restructuring-the-organizational-structure-at-kimberly-clark-essay 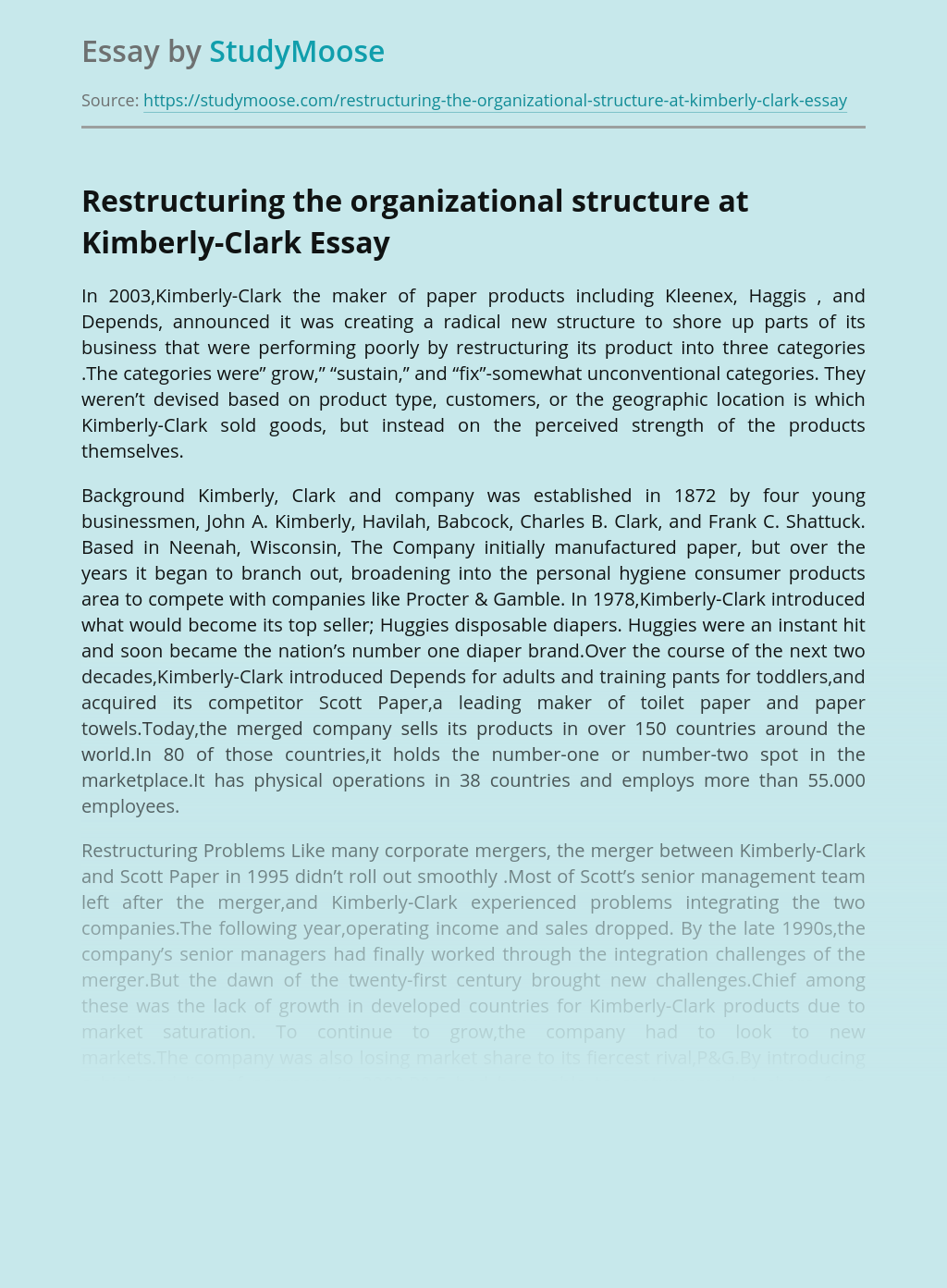 Turn in your highest-quality paper
Get a qualified writer to help you with
“ Restructuring the organizational structure at Kimberly-Clark ”
Get high-quality paper
Helping students since 2015
Stay Safe, Stay Original