Restoration Comedy refers to English Comedies written during the Restoration period from 1660-1710. The re-opening of the theatres in 1660 after public stage performances had been banned for 18 years by the Puritan regime signalled a renaissance of English drama. Restoration comedy is notorious for its sexual licentiousness, a quality encouraged by Charles II personally and by the rakish aristocratic ethos of his court. English Drama witnessed great changes during Charles II reign.

Women were introduced on stage for the first time and they were paid for the same, and theatre as a mode of entertainment and recreation was made fairly accessible to all.

Don't use plagiarized sources. Get your custom essay on
“ Restoration Comedy ”
Get custom paper
NEW! smart matching with writer

As a result of which, the theatre productions received a heterogeneous audience with non just aristocrats but their servants, hangers-on and a substantial middle class segment too. This period saw a flourish in comedies and also the emergence of the first professional woman playwright, Aphra Behn. Charles II was an active patron of drama.

Soon after he came to the throne, he gave exclusive play staging rights to the King’s Company and the Duke’s Company headed by Thomas Kiligrew and William Davenant, who were his mates during exile.

The audience of this period was not particularly courtly, but was quite small and could barely support two companies. There was no untapped reserve of occasional playgoers. Ten consecutive performances constituted a smash hit. This closed system forced playwrights to be extremely responsive to popular taste.

Fashions in the drama would change weekly as each company responded to the offerings of the other, and new plays were urgently sought.

The King’s Company and the Duke’s Company were neck to neck with one another for audience favour, for popular actors, and for new plays. In this hectic climate the new genres of heroic drama, pathetic drama, and Restoration Comedy were born and flourished. Variety and dizzying fashion changes are typical of Restoration comedy. With Charles II on the Throne, Restoration drama on the whole went through various changes.

Comedies were known for licentiousness and this could be understood in terms of His Highness’ own life and being within and outside the court, when he came back to the Throne, he got with him French influences, which also resulted on introduction of women on stage for the first time, as professional, paid actors. Esther Lombardi quotes in her essay, Game of Love: Restoration Comedy, “Comedy is usually a light, rather amusing, play that deals with contemporary life and manners.

Such a drama often has a satirical slant, but ends happily. ” The Comedy of Manners, which originated in France with Molier’s “Les Precieuses ridicules” (1658) is one such sub-genre of Comedy, which according to Molier was a way to correct social absurdities. This form was later classed as “Old Comedy” but is now read and understood under Restoration Comedy because it coincided with Charles II’s return to England. The main purpose of these comedies was to mock society and to lift up society for scrutiny.

The Restoration was a time of both political and social uncertainty and transformation. The rise of a merchant middle-class and its aspirations of social mobility threatened social hierarchies. The bourgeois values of personal acquisition, private judgment, and subjective self-assessment began to filter into the society and the literature of the period. Individual self-expression became an increasingly popular value among educated men and women, and there was a growing awareness of the problems of arranged marriage.

The Restoration comedies of manners both dealt with many of these new issues yet “the search for novelty, the ready resort to laughter, the conscious reducing of the significance of traditional codes” also helped the audience to evade them (Wilkinson, 57). The character of the rake-hero is a creation of Restoration society. Taking their cue from the activities and ideas that prevailed in the Restoration Court, the Restoration playwrights fashioned a character type who could be successful in an uncertain society by outwitting others without being hampered by an outmoded sense of morality.

The figure of the ‘Rake Hero’ is an important and unique feature of Restoration comedies. The rake- hero can be understood as a descendant of earlier male comic characters who were rogues, as Birdsall points out, “shrewd, double-dealing rascals dedicated to the cause of their own freedom and prosperity” , but he can be seen to represent the times as he supplanted the traditional romantic hero in many of the age’s theatrical productions. The Rake Hero was portrayed as nmarried, cynical, coarse but with the manners of a gentleman, witty, manipulative, and self-serving, one who tends to create his own brand of morality which include a belief in the open pursuit of sensual pleasure and a dismissal of marriage. According to Wilkinson, (his) “wit consists not so much in his defiance of traditional notions of right conduct, as in the casual and unruffled manner in which he expresses the ‘shocking’ sentiments” since “the first major requirement for a reputation for wit is the appearance of being in complete control of one’s feelings and/or of one’s circumstances, whether one is or not”.

These were reflected aptly in the most famous rake-heroes of the period, characters of Willmore, Lovemore and Horner. Willmore, the rake-hero of The Rover, is cynical about love and is the most insightful of the characters when it comes to seeing through disguises; he recognizes Helena dressed as a boy in Act IV and gives away Belville’s disguise earlier in the same scene. He refuses to buy into Angelica’s self-deception and instead castigates her for “the Vanity of that Pride, which taught you how to set such a Price on Sin” (II. i: 12-3). Especially with Angelica, his purpose is to reveal her illusions and hypocrisy. However, he doesn’t practice deceit to reveal the same. This is probably because his goal is to have sex rather than to cuckold. Thus, the balance between sex and power in Willmore’s personality leans more towards the enjoyment of sex, and his manipulation extends only to the women in service of this goal. Willmore epitomizes the libertine ideal of sexual freedom.

Hellena, the protagonist, exemplifies the independent and witty Restoration comic heroine, a suitable counterpart to her rake-hero Willmore. Independence of spirit is expressed rhetorically by many of the female characters but only Hellena does so through her use of wit. She resourcefully pursues Willmore and wins him. But even Hellena, the most independent and aggressive of Restoration heroines, cannot free herself from the social necessities of female chastity and conventional marriage.

Thus, for all Restorartion women characters, increased awareness of and ability to talk about their respective situations does not translate into increased freedom to act. The backdrop to Restoration Comedies explains the recurrent themes running through the play, like those being of love, marriage, prostitution, etc. A good example of the same would be Aphra Behn’s The Rover , as it embodies all of the above mentioned theme. The most notable thing however remains that it is a text being written by a woman, thus it is often understood as a pro-feminist text.

The dramatic representations of male and female characters come together in the way the of a comment on marriage. Many critics take the view that marriage as an institution is more vilified in Restoration comedy than in the drama of other periods. The rake-heroes and their friends do express the Hobbesian views of freedom to follow natural impulses and their raillery against marriage is due to it often being seen as a restriction on these impulses, all the more since divorces were practically impossible to obtain.

The kinds of marriages that are satirized and condemned are those based on economic or other considerations rather than love and mutual affection. Remarking on Restoration drama, Hume claims that “social commentary is an altogether common phenomenon in these plays”. There was an increased awareness of arranged marriages as a social problem and also a growing concern with women’s rights since once a woman was married she had almost no legal recourse against a tyrannical or unfaithful husband. Restoration comedy’s preoccupation with marriage reflected these concerns.

The increasing representation in drama of the urban gentry and middle class rather than royalty or aristocracy also corresponded to shifts in the society in which the merchant middle-class was growing in numbers and wealth and introducing into the culture the middle-class values of private ownership and individual rights. Hume believes the rake-hero illustrates the upper class rebellion against the repressive morality of the puritans and the bourgeois middle-class. The 17th Century saw a gradual decline in audience tolerance towards Restoration comedies, even with its modified form and thus the flourishing comedies soon declined. 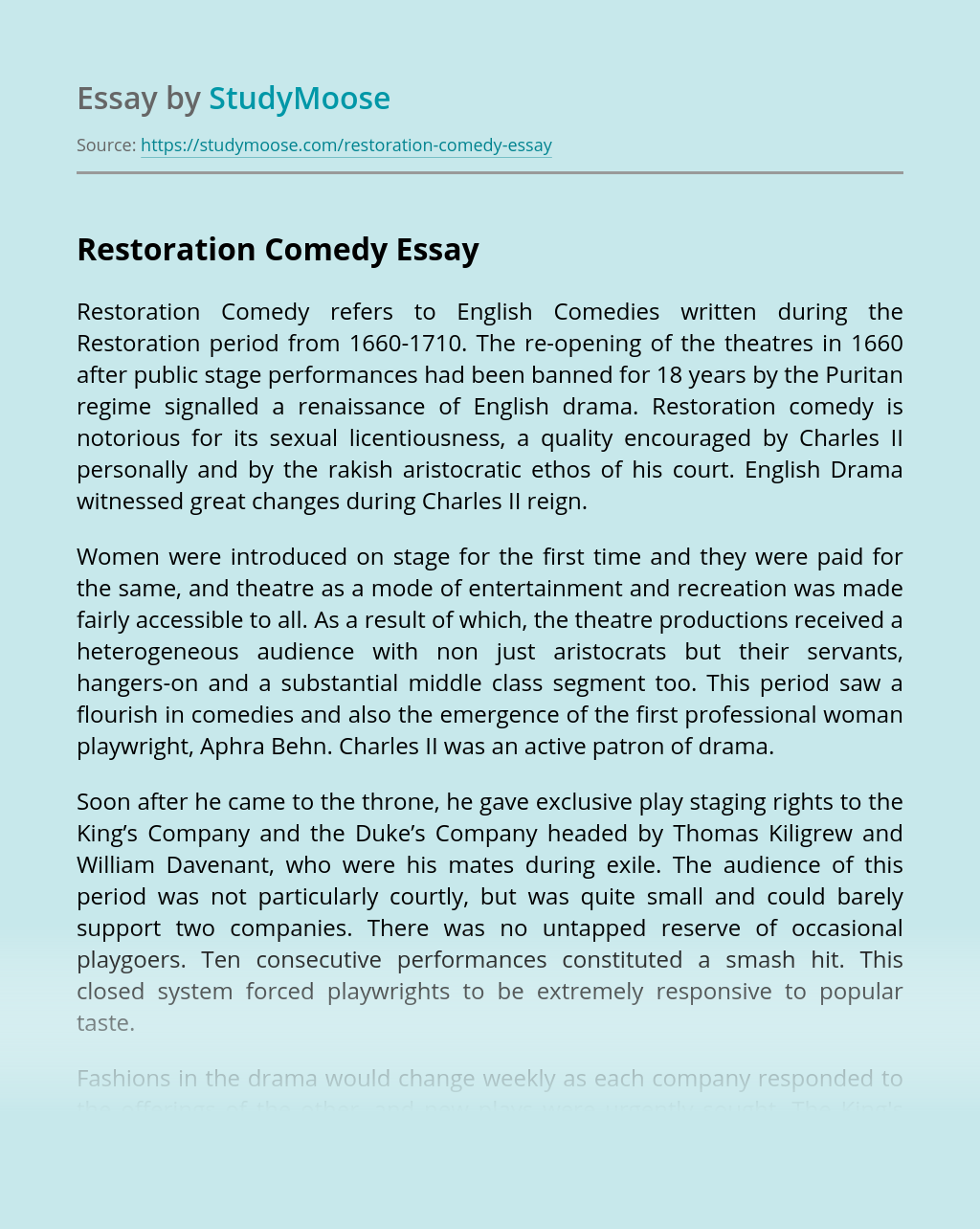