Response to Amy Cuddy: Your body language shapes who you are

Amy Cuddy was an intelligent young woman who was known to be smart and gifted until the age of 19, when she had encountered a horrific car accident. After this accident, Amy woke up in a head injury rehab ward. Her head injury had caused her IQ to drop by two standard deviations and she had to withdrawal from college. From having a core identity as being smart to the knowledge of her decrease in IQ had left Amy completely powerless. She felt as if her identity had been taken away from her and had lost the confidence that she once had.

Don't use plagiarized sources. Get your custom essay on
“ Response to Amy Cuddy: Your body language shapes who you are ”
Get custom paper
NEW! smart matching with writer

She tried several times to get back into college and to pursue her education but they kept telling her that college was no longer meant for her and that she should consider another path. However, she kept trying without giving up. After struggles and chances, Amy had eventually graduated from college, 4 years later than her peers. She later spoke with an adviser, whom had helped her get into Princeton University.

Amy Cuddy possessed certain qualities that allowed her to be successful after the car accident. From the intrapersonal or self-awareness realm, the quality that Amy contained was self-regard. Self-regard is to not only notice all the positive aspects of oneself, but to be fully aware of the less positive aspects as well and the individual continues to keep their head held high at the same time.

Although knowing that her IQ level had dropped drastically, Amy Cuddy still held herself on high regards and kept trying to get back into College.

This was emotionally and academically hard for Amy, but even when she was told that college was not meant for her and that she should consider following another path, she did not give up but kept trying. Although it was four years later than her peers, she still did manage to graduate from college.

From the Intrapersonal realm that focuses on relationships with others, Amy contains the quality of developing a meaningful intrapersonal relationship with her adviser. This means to have healthy boundaries, to have a good intimacy and to use dynamic communication skills. Amy had good intimacy with her adviser and had convinced her adviser that she was qualified and that she had potential to attend Princeton University.

Amy also contains the adaptability realm. This realm focuses on how an individual is able to handle different situations. Individuals who are strong in this field are able to be managing when things go unexpectedly. When Amy had finally gotten into Princeton University, at first she was afraid and was not as confident. She even consulted her adviser the day before her Princeton presentation and told her that she quits. Her “angel” adviser had given her this unique advise and told her to fake confidence, to fake it even if she was terrified and to do it until she gets to the point in which she realizes that she is actually doing it. Amy followed her adviser’s guidance and with success had continued her education.

Through research, Amy recognizes stress-reducing skills. People who are more familiar and experienced in this area often discover stress-reducing skills. They come up with certain ways to soothe and calm themselves from the stress that they encounter. She learns about the cortisol levels and how body language plays an important role on the confidence and success level of an individual.

After performing an experiment, Amy concludes that people with high power have a 25% decrease in the amount of cortisol while people with low power have a 15% increase in the amount of cortisol. She also concludes through the experiment that changing posture for a few minutes can actually change your life in meaningful ways. Performing high power poses tends to increase the confidence level of individuals, which leads them to perform their task successfully.

From the general mood realm, Amy possesses the quality of optimism. Optimism allows individuals to analyze their situation realistically and in a positive manner. This trait gives them a sense of hope that there will be benefits without believing that unrealistic conditions may occur. In my opinion I believe that Amy was initially an optimistic person and even after her car accident, deep down she still was.

Without being optimistic, Amy wouldn’t have been able to convince herself to go back to college and to pursue her education. She was told that she wasn’t meant for college but she did not give up. When speaking to her adviser, her adviser must have seen great potential in Amy for her to make the decision of making arrangements for Amy to attend Princeton.

Amy showed her adviser the potential she had and proved to her that she was qualified. Without the optimism she wouldn’t have been able to convince her adviser. Amy did however want to give up right before the Princeton presentation, but that’s because she doubted herself and she felt out of placed, but what brought her through college and to the adviser was the optimistic trait that she possessed. She could of gave up right after her car accident when she was told that college was not for her, but she did not.

By analyzing the emotional intelligence and academic realm, it can be said that Amy contains the quality of reducing impulsivity. Amy wanted to go to college although she was told that college was no longer an option for her. She knew that college might be more challenging for her and that she would finish college later than her peers. However, throughout the struggles, Amy knew that the outcome would be positive. When told to find another option than college, she could of easily found another way, but her determination to go to college and to pursue an education helped her begin her journey. She had a clear sense of what she wished to accomplish and chose to sacrifice time to reach her goal.

Response to Amy Cuddy: Your body language shapes who you are. (2016, May 13). Retrieved from https://studymoose.com/response-to-amy-cuddy-your-body-language-shapes-who-you-are-essay 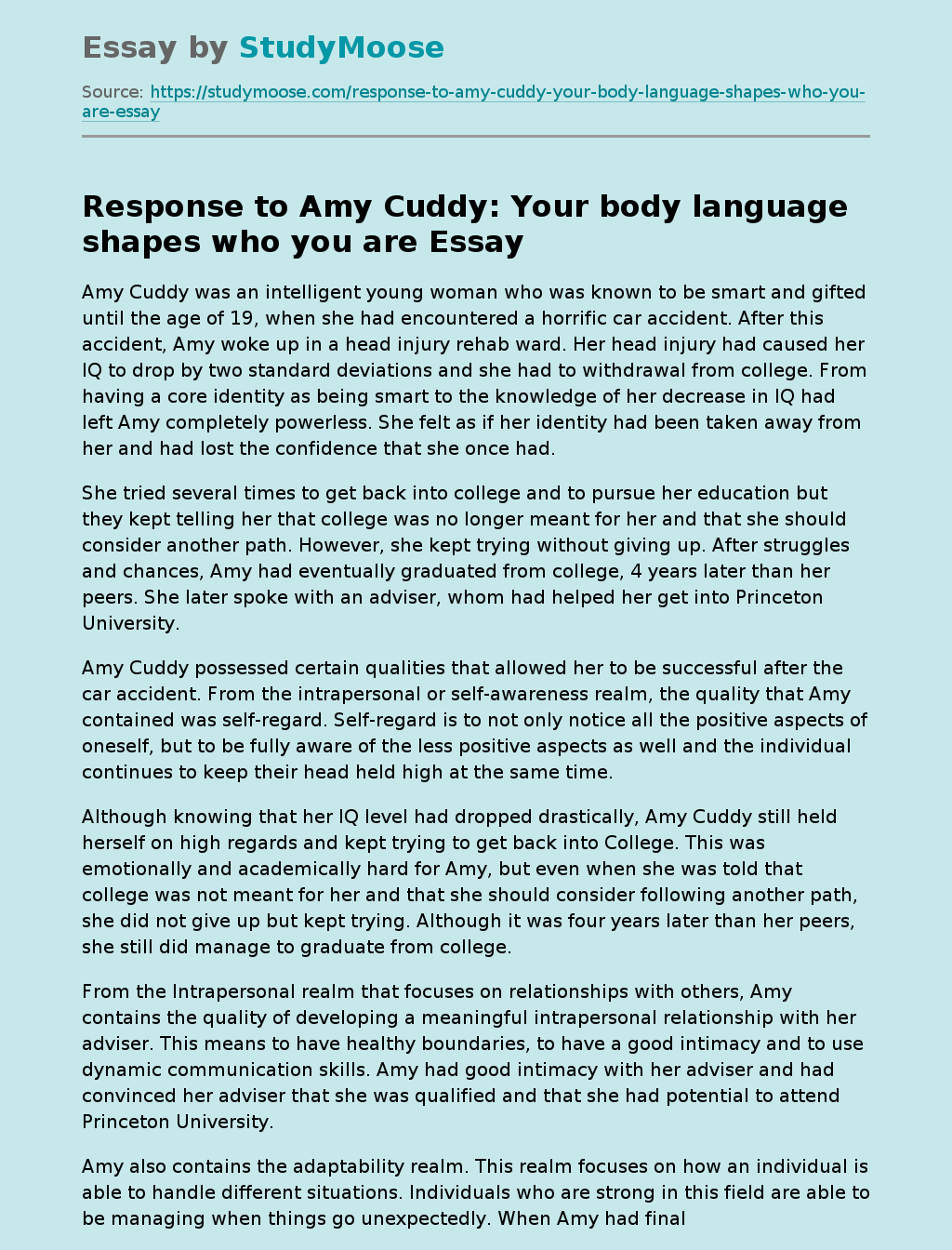