Response: Is America in Moral Decline?

Yes, and at the same time a very resounding no. Bill Bennett attempts to make the point that America is worse off now than it was in decades past by showing statistics of single motherhood, children on welfare, average daily television viewing, and other “moral barometers”. What he fails to mention is that statistics gathering has become far more accurate in recent years. It’s becoming increasingly easy to gather data now, with the internet and a cell phone in every pocket in America than it has ever been before.

Don't use plagiarized sources. Get your custom essay on
“ Response: Is America in Moral Decline? ”
Get custom paper
NEW! smart matching with writer

Moving forward with a grain of salt, there is more than one way that someone can determine his data. The single-motherhood statistics are indefensible if one even wanted to try. Studies show that children develop better in dual parent households, and more children are growing up without fathers, in less stable environments. The failure of 21st century fathers to take care of their children is a pervasive and serious problem, and can easily be categorized as a symptom of America’s moral decline.

Other stats listed by Bennett are less convincing. The fact that between 1960 and 1990 television viewing rose from 5 hours a day to 7 hours a day is a meaningless statistic. Television programs themselves have evolved, and networks like History, Discovery, PBS, and Animal Planet (not to mention the introduction of 24 hour news networks and CSPAN) are actually informative.

Bork has a more dramatic castigation of American morality, one devoid of statistics but stocked up on vitriol and animosity. Bork’s seething hatred of “modern liberalism” is apparent in every line and every thought he puts to paper.

His critique of the American justice system seems at best off base, and at worst fallacious. He repeatedly states that America has sunk so low morally that we no longer punish crime. He rails against our high crime rates while we refrain from punishing those who are “clearly guilty”. I would ask Mr. Bork then how he explains the fact America imprisons almost 10% of our citizens each and every year. How he explains that in today’s America, our prisons are more full than those under Soviet Russia, or the bastion of liberalism that is modern day North Korea.

His erroneous take on issues like this one are irresponsible and dangerous accusations to throw around. There are real problems to be solved, however not punishing criminals is nowhere near that list (though over-punishing may be). Certain aspects of American morality are certainly better than they were 50 years ago. Civil rights, treatment of the LGBT community, fair treatment of women both at home and in the workplace, are all examples of that. At the same time however, ignorance has become socially acceptable. Where we once applauded intellectual accomplishments we now scoff at them. The demystification of the White House has led us to believe that our politicians can now be “normal people you’d want a beer with”. We no longer seek the best and brightest to run our nation, and that in itself is a problem.

Our society has also become oversexualized, and a massive paradigm shift is currently being undertaken that replaces much of our popular culture with that of a formerly “ghetto” subculture. Teenage girls now frequently go out to parties wearing outfits that only twenty years ago were reserved for prostitutes and strippers. “Respect” is no longer a concept that involves hard work. Instead, many of today’s youth have been indoctrinated to believe that respect is innate, and that if someone doesn’t immediately grant them the respect they believe they deserve it’s grounds for confrontation and violence. While gangs have been around since the 19th century, the end of the 20th brought gang violence to another level.

Thousands of teenagers perished in gang related violence during the 1990s, and while those numbers have trailed off nationally, the problem remains ubiquitous. Certain aspects of our culture are indeed sliding into depravity, however to judge the entire moral compass of a nation by the fact that it’s become more socially acceptable to smoke marijuana and dress slutty at parties detracts from the greater moral strides we’ve made in human rights and the treatment of our fellow man (and woman). This question doesn’t have a one word answer… and any answer you receive from it will be based on the author’s personal experience, and thus subject to interpretation.

Response: Is America in Moral Decline?. (2016, Dec 26). Retrieved from https://studymoose.com/response-is-america-in-moral-decline-essay 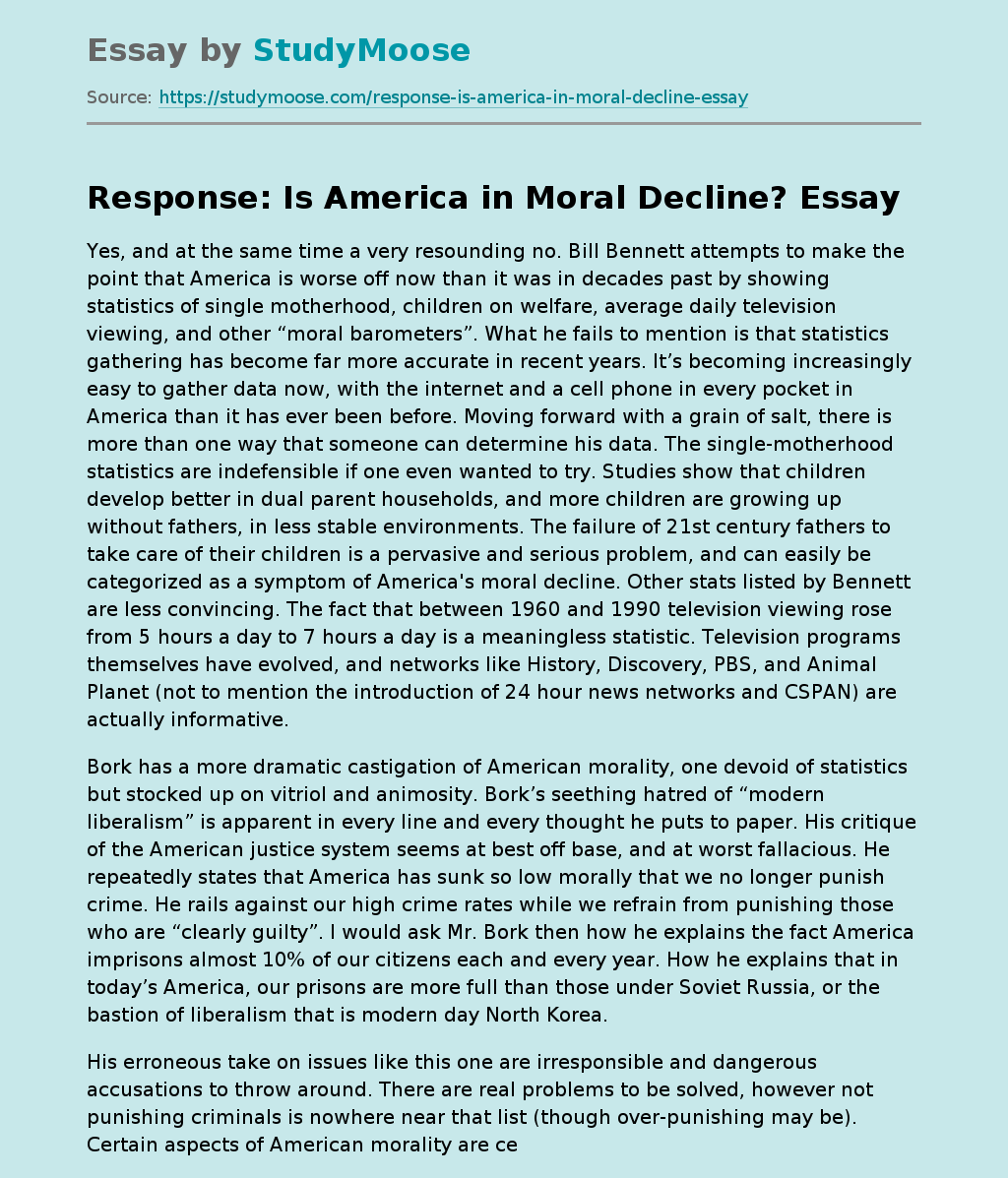