Peter had been a human resource (HR) manager for 18 years and vice president for 2 more years for Zyedego Corporation, a small company in New Orleans. In the last decade, there have been many changes to what potential/actual employees can be asked and what constitutes fair and equitable treatment. Frankly, the situation Peter was in was partly his own fault. The first issue began when Gwyn, one of Peter’s HR managers, was planning on rehiring Dana Gonzales but found out that Dana was pregnant.

Don't use plagiarized sources.
Get Your Custom Essay on Resolving Ethical Business Challenges Just from $13,9/Page

Because of the “rough” condition of the workplace, Gwyn was concerned for Diana’s safety. If Dana were rehired, employees’ hourly wages should be decreased by 25 percent because the company had experienced setbacks during the hurricane and had to work with a reduced budget. In addition, Gwyn had some concerns over Dana’s citizenship because her passport appeared to be questionable. Dana had been slowing providing the documents since the flood destroyed the original documents.

Then Dana stated that if not rehired she would go to a competitor and expected the company to pay severance of two weeks’ wages for the time she was out of work during the hurricane.

Another issue is the hiring of truck drivers. Zyedego hires many truck drivers and routinely requests driving records as a part of the preemployment process. Several of the potential new hires have past DWI records. Gwyn has hired some drivers with infractions to secure the necessary number of drivers needed to the company. Zyedego has even deeper problems when Hurricane Katrina killed Guy Martin. The company’s death benefits provide only 50% of the deceased pension for a surviving spouse. Also, because the body had not been found, there was legal question of death. Darell Lambert, the chief adjuster for Zyedego’s insurance and pension provider, proposed that it will be helpful for the company’s recovery and survival to reduce the total reimbursements by 40%. Here is the point where Peter’s decision making comes to play.

1. What are the legal and ethical risks associated with the decision about hiring truck drivers at Zyedego? *
2. What should Peter recommend to Gwyn about Dana’s case? * Peter should recommend to Gwyn not to rehire Dana due to questionable citizenship. The company may be liable if proven that Dana is not a resident of New Orleans.

3. Do you think Peter is too emotionally attached to the Martin case to make an objective decision? * Yes. Because Peter wanted to help the 100 families even if there is a need to cut down the total reimbursement by 40%. There is the assurance that the 100 families will receive financial assistance from the company but not the exact amount as stated.

* Regarding the issue of hiring the truck drivers, it is unethical for Gwyn to hire employees only for the sake of securing the numbers of workers needed to perform the job. Gwyn should take consider of the implications of her ineffective decision making on hiring drivers with records of infractions. Still, there is a probability of recurrence. * On Dana’s case, it will be ethical for Peter to recommend not rehiring Dana because of the “uncertainty” about her citizenship. If proven that Dana is not a citizen of New Orleans, then there is misconduct on Dana’s point of view because she had not provided a reliable document regarding her nationality requirements if she is really permitted to work in New Orleans. * On Martin case, Peter had to take some considerations of implementing some actions for the survival of the business. As an ethical leader, Peter should consider stakeholder’s interest at the same time. His decision should be in the process that is respectful of them not only for the firm’s survival. 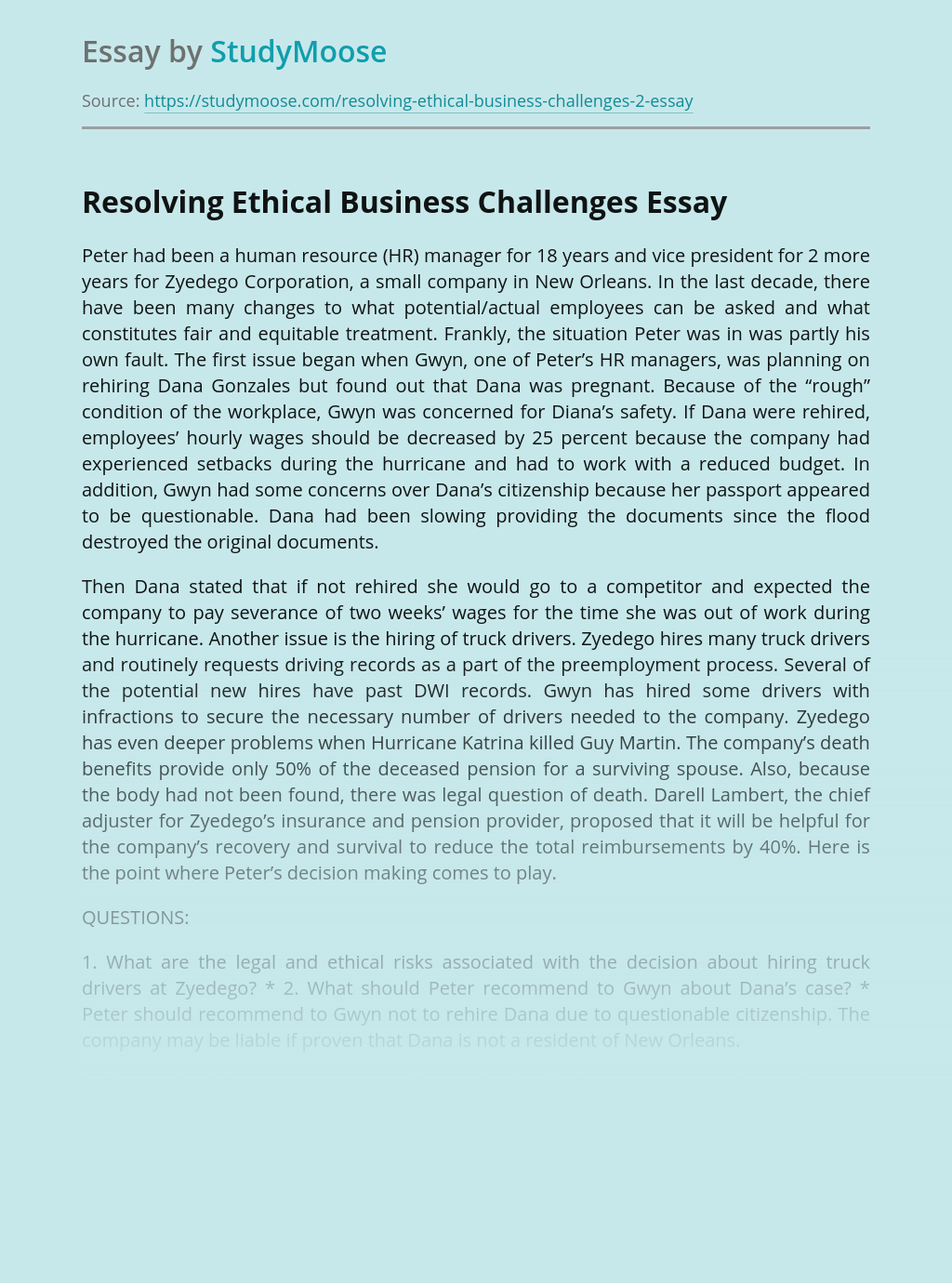 Executive Summary Pizza Hut is one of the leading pizza restaurant companies in the world in terms of both the number of outlets and the percentage of market share that it holds. Pizza Hut’s main purposes are to provide foods and services of superior quality and value that improve the lives of the world’s consumers,...

Shell is a multinational oil and gas company with around 87.000 employees in more than 70 countries. It is one of the world’s most valuable companies. Shell was started by Marcus Samuel back in 1833, he was a shopkeeper in London. In 1907 they merged with The Royal Dutch Petroleum Company. 1.1.1&1.1.2 Having a lot...

Get Essay
Business Law and Charges Ace for The Equality

A relationship in a business looks like an individual association. Both business and individual associations include: Three Kindergarten Nearest allies’ to be explicit Tom, Dick and harry now being adult decided to acquire some certified money. In their social event, Tom is the business mind, Dick is the mechanical one and Harry is the imaginative...

Intergroup Relations Introduction             Organizations are made of individual employees who are grouped using different criteria for the achievement of certain goals and objectives. Groups can be formed in terms of departments, related tasks or shared goals. Intergroup relations occur since the groups have different functions but, they all serve...

Appropriate Use of Transparency

Transparency in management circles is considered a competitive advantage. It involves sharing all information that one is ready to share including uncomfortable one. Transparency implies communication, openness and accountability. Last year I worked in a Non Governmental organization where I found out that they were require being transparent by donors and other stakeholders for them...