Under Section 22 of the Reserve Bank of India Act, the Bank has the sole right to issue bank notes of all denominations. The distribution of one rupee notes and coins and small coins all over the country is undertaken by the Reserve Bank as agent of the government.

Don't use plagiarized sources. Get your custom essay on
“ Reserve bank of India ”
Get custom paper
NEW! smart matching with writer

The Reserve Bank of India is the main monetary authority of the country and beside that the central bank acts as the bank of the national and state governments. It formulates, implements and monitors the monetary policy as well as it has to ensure an adequate flow of credit to productive sectors.

Regulator and supervisor of the financial system

The institution is also the regulator and supervisor of the financial system and prescribes broad parameters of banking operations within which the country’s banking and financial system functions. Its objectives are to maintain public confidence in the system, protect depositors’ interest and provide cost-effective banking services to the public. The Banking Ombudsman Scheme has been formulated by the Reserve Bank of India (RBI) for effective addressing of complaints by bank customers.

The RBI controls the monetary supply, monitors economic indicators like the gross domestic product and has to decide the design of the rupee banknotes as well as coins. Managerial of exchange control-The central bank manages to reach the goals of the Foreign Exchange Management Act, 1999. Objective: to facilitate external trade and payment and promote orderly development and maintenance of foreign exchange market in India.

Issuer of currency- The bank issues and exchanges or destroys currency notes and coins that are not fit for circulation. The objectives are giving the public adequate supply of currency of good quality and to provide loans to commercial banks to maintain or improve the GDP. The basic objectives of RBI are to issue bank notes, to maintain the currency and credit system of the country to utilize it in its best advantage, and to maintain the reserves. RBI maintains the economic structure of the country so that it can achieve the objective of price stability as well as economic development, because both objectives are diverse in themselves. Banker of Banks- RBI also works as a central bank where commercial banks are account holders and can deposit money.RBI maintains banking accounts of all scheduled banks.[30] Commercial banks create credit. It is the duty of the RBI to control the credit through the CRR, bank rate and open market operations.

As banker’s bank, the RBI facilitates the clearing of cheques between the commercial banks and helps inter-bank transfer of funds. It can grant financial accommodation to schedule banks. It acts as the lender of the last resort by providing emergency advances to the banks. It supervises the functioning of the commercial banks and take action against it if need arises. Developmental role- The central bank has to perform a wide range of promotional functions to support national objectives and industries.[8] The RBI faces a lot of inter-sectoral and local inflation-related problems.

Some of this problems are results of the dominant part of the public sector. Related functions-The RBI is also a banker to the government and performs merchant banking function for the central and the state governments. It also acts as their banker. The National Housing Bank (NHB) was established in 1988 to promote private real estate acquisition. The institution maintains banking accounts of all scheduled banks, too. RBI on 7 August 2012 said that Indian banking system is resilient enough to face the stress caused by the drought like situation because of poor monsoon this year. 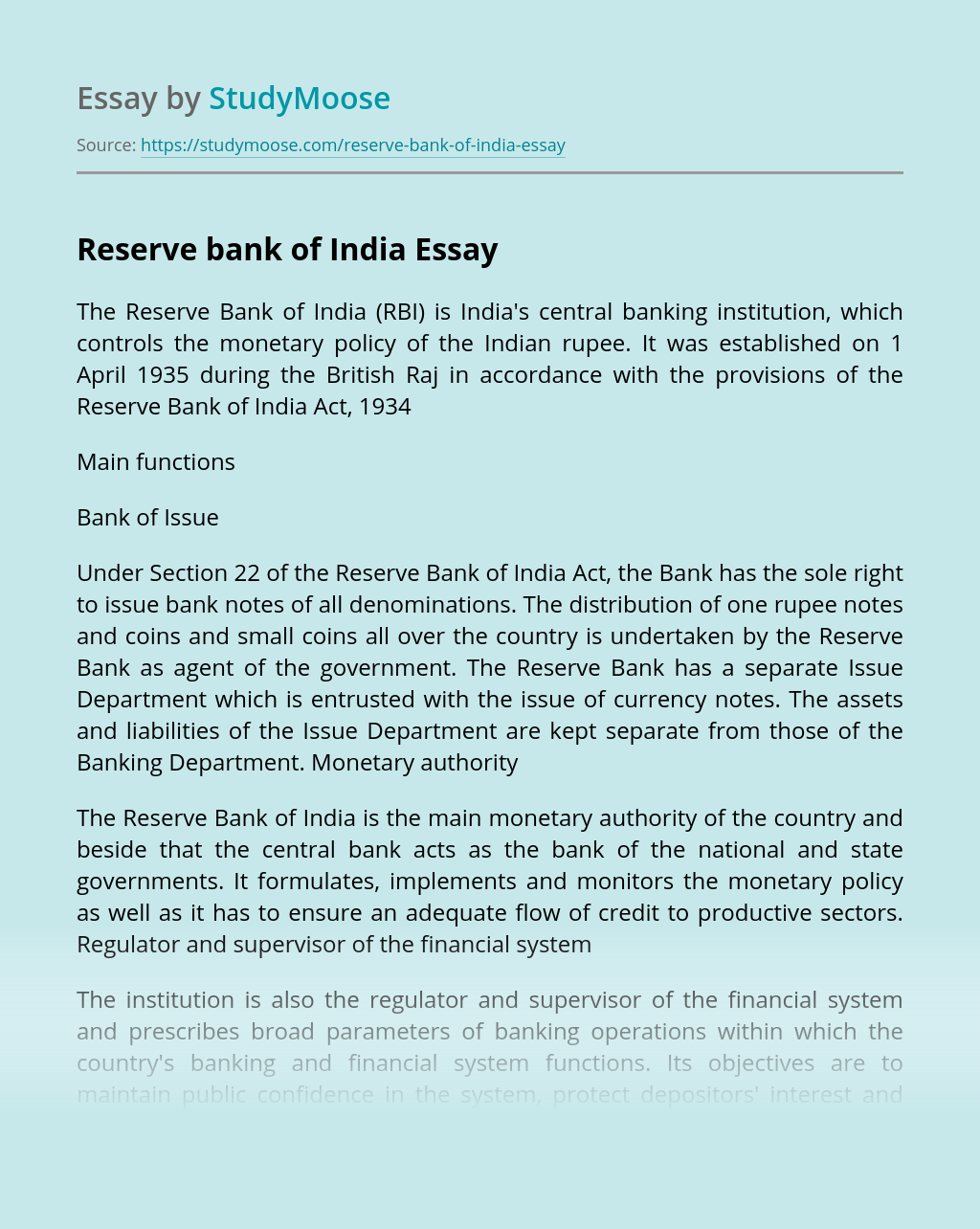