Reservation policy fails to achieve its purpose of giving equal opportunity to everyone because of lack of infrastructure in the rural areas of the country where the proportion of backward classes is significant.

A number of people living in some remote areas in Orissa, M. P. or Bihar are not even aware of these policies. They are deprived of even primary education and basic employment which make them more backward financially. It fails to establish which causes disequilibrium in the status of the states.

The total reservation quota stands at 49% in many states of India and this includes the SCs, STs and OBCs. The trend seems to have shifted to reverse discrimination rather than more affirmative action. Some backward class’s elite have gained political and economic clout based on this reservation.

However a majority of the backward classes is not living any differently than before because their subsistence is meagre and rural lifestyles do not provide them with any of the benefits.

The worst thing is that many are not even aware of these policies, especially in the interior parts of the nation. Thus a distinct economic class system exists within the backward classes. Mostly undeserving people have gained the advantages and the deserving ones are still without any significant positive change in their plight.

It is interesting to note that the constitutional provisions regarding reser­vations which explicitly single out certain castes for special preferential treatment contradicts the documents prohibition on discrimination based on caste, race and other such other criteria.

Besides, despite the creation of commissions to monitor the implementation of reservation policy by the centre the constitution gives great liberties to the individual states to determine the quantity and limits of reservation which often lead to exploitation.

In reality there is no abolishment of caste system. Instead the disparity increases because of antagonistic attitude on both sides. The member of lower class strongly feel that they do not have sufficient reservation and the members of upper classes feel that inspite of their hard work and merits they do not have the same opportunities.

Despite constitutional prohibitions and laws, violence and injustices against untouchables continue even today, particularly in rural areas.

The other minorities are demanding reserved representation too, which would ultimately lead to a situation where the seat left for the majority would not be proportional to their population. Thus the whole purpose of providing equal opportunity gets defeated. The caste system and discrimination have persisted in spite of the reservation quota.

The reservation policy has brought a climate of antagonism between people belonging to different castes. Regional political parties have sprung with an agenda to promote casteism for their partisan gains.

Reservation has become an electoral tool nowadays. Reservation policy has also bluntly promoted caste over intellect and hard work. As a result we are producing substandard engineers, doctors, bureaucrats and other professionals under the present reservation policy. The policy just does not stop at such opportunity. It promotes incompetent people and promotes these people over deserving and qualified individuals.

The reservation policy has started to divide India’s future generations at a very small age. Children not belonging to a reserved category have to work twice as hard compared to a kid with a reserved future with already much better financial means. May be the reservations policy has double crossed as we see today are mostly held by the upper class people because they have been thought to excel since childhood to the lack a reserved future and opportunities.

If we continue to bring people in our colleges, filling our jobs and promoting the decision making positions based on the caste, soon we would be only country with the least number of competent people. We need a policy which really helps people deprived of education and means of better life.

Reserving a certain percentage of seats in the higher education and jobs in the high ranks of the government is not going to help to solve problems of 85% of total backward castes population.

The above picture clearly shows that the reservation policies in the last 64 years have failed for what they meant to do. It is time to try new approach to abolish reservation because merit and efficiency are in great danger. At this point of time the abolition of the reservation quota and a better system of affirmative action would be beneficial to the whole nation. We can propose that

(1) Further policies or entreaties for any kind of reservation need to be discarded and disconnected.

(2) There is need for a slow but a steady removal of reservation quotas.

(3) Development of more and better infrastructure in the rural areas to remove disparities is necessary. Education and knowledge in a modern society would lead to removal of some, if not all, discrepancies in treatment of people based on caste, culture and religion.

(5) For already entered categories (in employment) we could make the promotions of the jobs merit based.

There have been improvements due to the reservation policies, which can not be denied at any cost. But it is not easy to pinpoint as to now much of these improvements can be credited to reservations and how much might have occurred without them as a result of government’s general development policies and economic growth.

It can be concluded that reservation policy and its persistence is likely to increase the caste gap rather than help decrease it. The bitter truth is that these policies will never help reach the long cherished goal of equality. So here comes a need for serious consideration for the reservation policy in India, especially when it comes to educational institution and employment. Let us stop it. We can not pay for our faults for long.

Part XVI of the constitution deals with special provisions for certain classes, viz. Scheduled castes and Scheduled Tribes. However the constitution does not specify the persons who fall in these two categories but leaves it to be determined by the President of India. Some of the important measures made by the constitution for this purpose include.

(a) Reservation of seats for SCs and STs in the Lok Sabha and State Legislatures on the basis of their population.

(b) Bestowal of certain special powers on the State Governments to impose some special restrictions on the right of SCs and STs to protect their interests.

(c) Provisions of special grants by the centre to the state for meeting the cost of scheme of welfare designed for the scheduled tribes and raising the level of the administration in scheduled areas.

(d) Appointment of a National Commission for Scheduled Castes and Tribes by the President. It is the duty of the Commission to investigate the matters relating to safeguards for SCs and STs and to submit necessary report to the President. That report is laid before each House of Parliament.

(e) To pay special attention to the educational and economic interests of the weaker sections of society to prevent their exploitation.

Two Backward class commissions were set up under Article 340 after the constitution was adopted. The Kakkasaheb Kelkar commission, appointed in 1953 submitted its report in 1955 and used four criteria for identifying other Backward Classes (OBCs)

(1) Low social position in the traditional hierarchy of Hindu Society.

(2) Lack of educational progress among majority of a particular caste/ community.

(4) Inadequate representation in Government, The commission used the first criterion to relate with social backwardness. The report was considered too vague and impractical.

The centre’s next initiative come in 1978 when the Janta Government appointed a commission under B.P. Mandal to find out how many backward classes there were in the country. The report of this commission which identified 3743 backward class was shelved till 1990 when the V.P. Singh Government brought out the order for 27% reservation in central services for other backward classes.

Now, the air is now thick with the sense of dejavu which we experienced in early 90s. In one swift the present UPA Government again raised the bogey of reservation thereby again dividing India. Besides imposing a quota in cnetral universities and institutes it is also pushing companies for a job quota in the private sector.

The Common Minimum Programme promises reservations for OBC in higher educational institutes. In fact it speaks of being very sensitive to the issue of affirmative action including reservations in the Private sector.

It is sheer politics. The desperation is reflection of the fact that the Congress is unable to reinvent itself in its quest for a majority. Neither BJP nor Congress can boast of social diversity that is necessary to represent the plurality of India. The country’s two largest parties are controlled by upper caste. The Congress believes it can alter its state of irrelevance in over 200 Lok Sabha seats by wooing back Dalits and OBCs. Instead of giving reservations, scholars say, we must take a series of sequential steps ranging from education to vocational training to financing enterprises though some parties prefer quick fix solutions. The Congress is one of them. It has taken diagnosis of a physician and approached a quack for prescription.

Our population is 1.02 billion and the SC/ST population is around 240 million (24 crore). Let us have a look at some telling figures about reservations.

(2) 12 Chief Ministers of the states belong to OBC in present.

(5) 1 lakh estimated number of Government jobs under quota lies vacant across the country.

(6) 6% class I Central Government jobs are held by Scheduled castes and Scheduled Tribes.

(7) 89% class I Central Government jobs are held by others who constitute only 25% of the population. 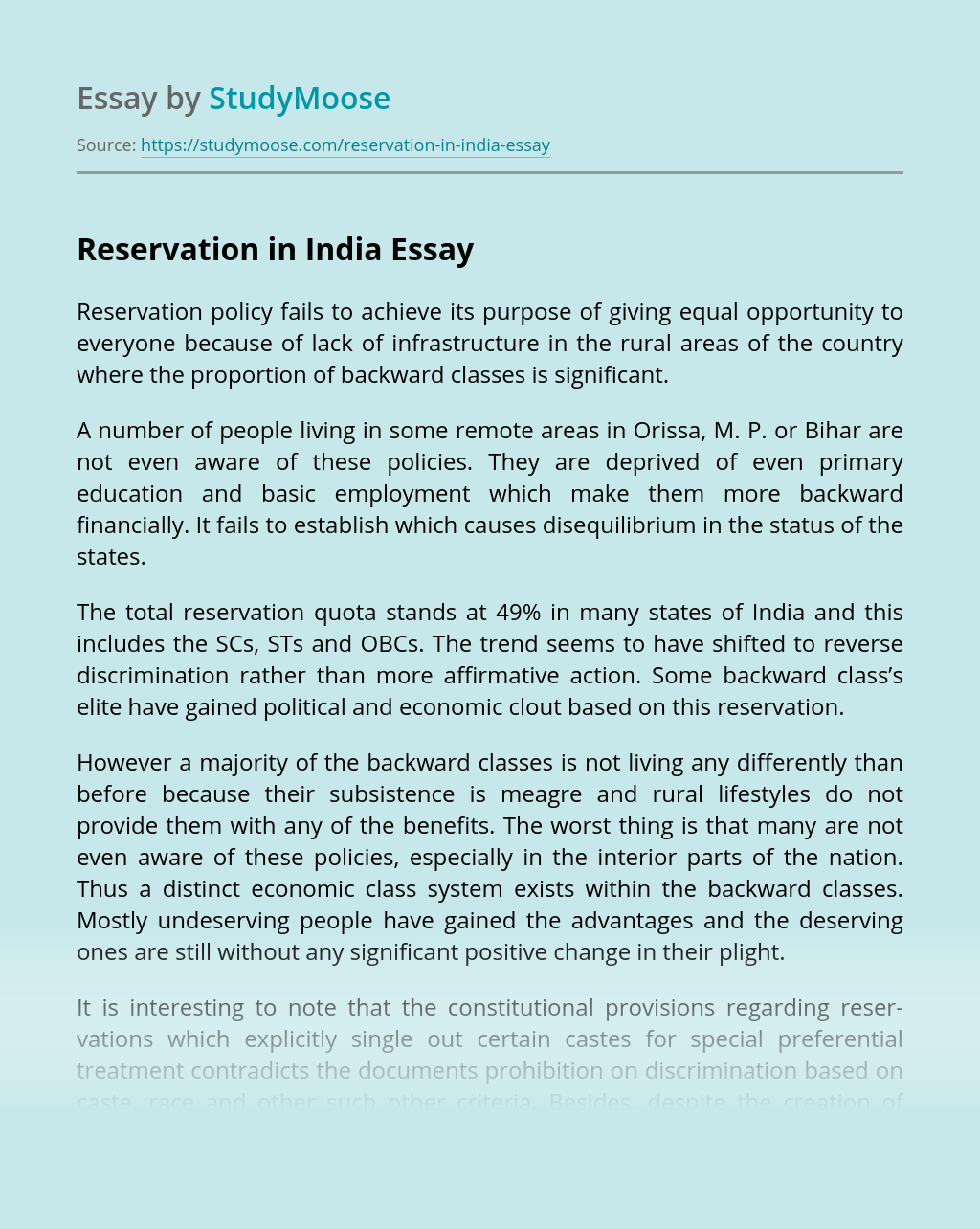