The advent of the internet played an important role in revolutionizing the way people communicate with family members, friends, acquaintances, and even strangers. There is a lot of information about social media’s effects on society and it is evident that platforms like Facebook, Instagram, Twitter, and Snapchat have affected people’s lives in different ways. Some argue that social media has positive impacts on society, but I believe that social media has done more harm than good.

Don't use plagiarized sources. Get your custom essay on
“ Social Media’s Effect on Society ”
Get custom paper
NEW! smart matching with writer

Social media has become an important part of today’s mass media and turned out to be one of the most used communication channels. The role of any media platform in society is to provide news, inform, educate, entertain, act as a change agent, bring people from different parts of the world together, promote trade, and bring social change (Mehraj et al.

Of course, social media is arguably the most effective communication method with the power to reach millions of people in a short time. It only takes a single click of a button to share a Facebook post or a retweet to spread information to hundreds, thousands, and millions of social media users. This may sound good especially for organizations that seek to spread news, celebrities looking to attract followers, people who want to establish a strong social media following, and businesses that use social media platforms to advertise. The downside is that each tweet, retweet or post could be a potential source of fake news, deceitful advertising, and information with malicious intents. Fake news, information or advertising covers every aspect of life including politics, health, business, and the economy. Fake information may refer to false content, manipulated content, misleading information, imposter content, satire with potential to harm or fool, or content with deliberately misleading information (Bakir et al. 1). Several events have demonstrated the effects of the contemporary phenomenon of fake news.

A good example is the 2016 US presidential election contest between Hillary Clinton and Donald Trump. People around the world feared that fake news may have influenced the outcome of the election and it was all because of powerful social media platforms like Facebook and Twitter. Even if fake information did not influence the results, widespread sharing of fake news has a negative impact on the factual foundations on which people form opinions, and the country’s consequent democratic health (Bakir et al. 6). It is easy to argue that fake news during the US presidential election helped advertising companies capitalize on emotions to attract attention and generate advertising revenue. However, the risk of having a large number of wrongly informed citizens is high during such periods thanks to social media. Some people can easily recognize fakes news, but vulnerable people like college, high school, and middle school students find it more difficult to recognize fake news from news, opinion, and advertising articles (Bakir et al. 6). This means there is a large number of social media users who are easily duped by fake news. Another example of potentially devastating fake news is a silly rumor about the Queens’ death in December 2016. It only took a single tweet from a fake BBC News account to spread the conspiracy in the UK and around the world. This example shows what could be happening every day. There are around 2 billion monthly active Facebook users and around 300 million monthly active Twitter users. With such large numbers, it’s easy to spread fake news on the internet and deceive billions of people within minutes.

The worst thing that could happen to wrongly informed citizens is to stay wrongly informed. If fake news goes uncorrected, many citizens are at a risk of staying wrongly informed and this is a significant social and democratic problem. This happens because of filter bubbles or echo chambers that reinforce and amplify certain ideas. In this case, algorithms are used to present wrongly informed people with selectively gauged information based on their personal details, what they want to see, browsing history, posts, Google searches, connections, and the items they purchase online. Consequently, social media users are separated from exposure to information that disapproves their views (Bakir et al. 7). Wrongly informed users can easily be exposed to the phenomenon of confirmation bias. They are constantly exposed to information that confirms their beliefs and this contributes to the tendency to look for, notice, interpret or believe in anything that confirms their pre-existing views regarding a certain subject. This tendency is what is known as confirmation bias and is a potentially harmful psychological problem. On that note, it is important to mention that some people have fake lifestyles on social media and influence vulnerable youngsters who can easily misinterpret what life is all about.

In addition to increasing the risk of access to fake news and inaccurate information from unverified sources, social media platforms have potentially harmful effects on the health and overall well-being of users from small children to adults and the elderly. There is plenty of evidence showing how social media has the potential to ruin a person’s life physically, socially, and mentally or psychologically. Social media enthusiasts definitely express their absolute amazement of Twitter and Facebook’s ability to help users stay in touch with friends and family members. In addition, social media lovers will say that these platforms are the best ways to find people and groups with the same interests. However, it is important to note that these platforms have increased the risk of befriending and interacting with strangers with potentially malicious intentions.

One of the most sensitive issues with regard to meeting new people on social media is cyberbullying. This problem mostly affects the younger generation as some users leave hurtful messages on other users’ profiles. Research has shown that social media and texting are the most popular venues for cyberbullying and victimization, but most culprits are shifting to social media platforms (Whittaker et al. 11-27). Overall, social sites like Facebook and YouTube have facilitated cyber aggression and peers are usually the main perpetrators of cyberbullying crimes. Several theories have explained how media platforms affect an individual’s decisions and psychological health. According to Leonard Berkowitz’s Aggressive Cues Theory, exposure to aggressive stimuli such as socially acquired cues and environmental situations increase the chances of becoming violent by increasing emotional and physiological arousal (Mehraj et al. 60). Therefore, in addition to access to violence-related information on social media, young people who experience cyberbullying are likely to develop violent behavior and even become bullies. The theory of observational learning is also worth mentioning because it takes the above theory a step further. It proposes that people can learn to be aggressive by observing information on media platforms (Mehraj et al. 60). In simple terms, media portrayals of violent behavior teach people new ways to become violent. Facebook, Twitter, and YouTube users will agree that it is easy to upload a video or create posts with violent content and it might take some time before the contents are deleted. In some cases, users only have to click a shared link which directs them to a site with content that promotes aggressive behavior.

There is an increase in the number of terrorist groups that spread propaganda and hate about certain individuals. Today, Facebook and Twitter have turned into virtual recruitment and instant communication platforms while YouTube has turned into a cyber training venue (Dean et al. 108-112). These three communication channels have helped propagate terrorist media activity by making easy for terrorist groups to send messages, plan attacks, recruit, and train new recruits. Additionally, these groups are known to use social sites to raise funds. The truth is that every parent dreads the thought of their children falling into the traps of terrorist groups on social sites.

Social media supporters will argue that sites like Facebook and Twitter facilitate easy communication, which is true. However, the quality of the message has deteriorated because social sites have a negative impact on essential interpersonal communication skills. According to Susan Tardanico from Forbes, a large percentage (93%) of communication is based on verbal body language (Phoon 3). Unfortunately, social media has overtaken face-to-face communication leading to an increase in “the potential for misinterpretation of information” (Phoon 3). The point is that misinterpretation can have negative impacts on behavior and interpersonal communication in real-life situations. It has diminished society’s power to interact and communicate face to face. There is also substantial evidence showing a clear link between social media usage and sleep disturbances. According to a research conducted by researchers from the University of Pittsburgh social media has negative impacts on the sleeping habits of young adults aged between 18 and 30 years (Levenson et al. 36-41). The researchers found out that social media can replace sleep, promote cognitive, physiological and emotional arousal, affect melatonin secretion, and delay cardiac rhythms because of the bright light emitted by the devices used to access social sites (Levenson et al. 39).

The two major negative impacts discussed here are the risk of becoming a wrongly informed society due to fake information and the high chances of living an unhealthy life because of the psychological, physical, and social effects of social media. Fake information is shared every day on social platforms and society cannot afford to ignore the risks of living a fake life, staying misinformed, losing fundamental verbal communication skills, aggressive content, sleep loss, cyberbullying and radicalization. These are the reasons I believe social media has had an overall negative effect on society. 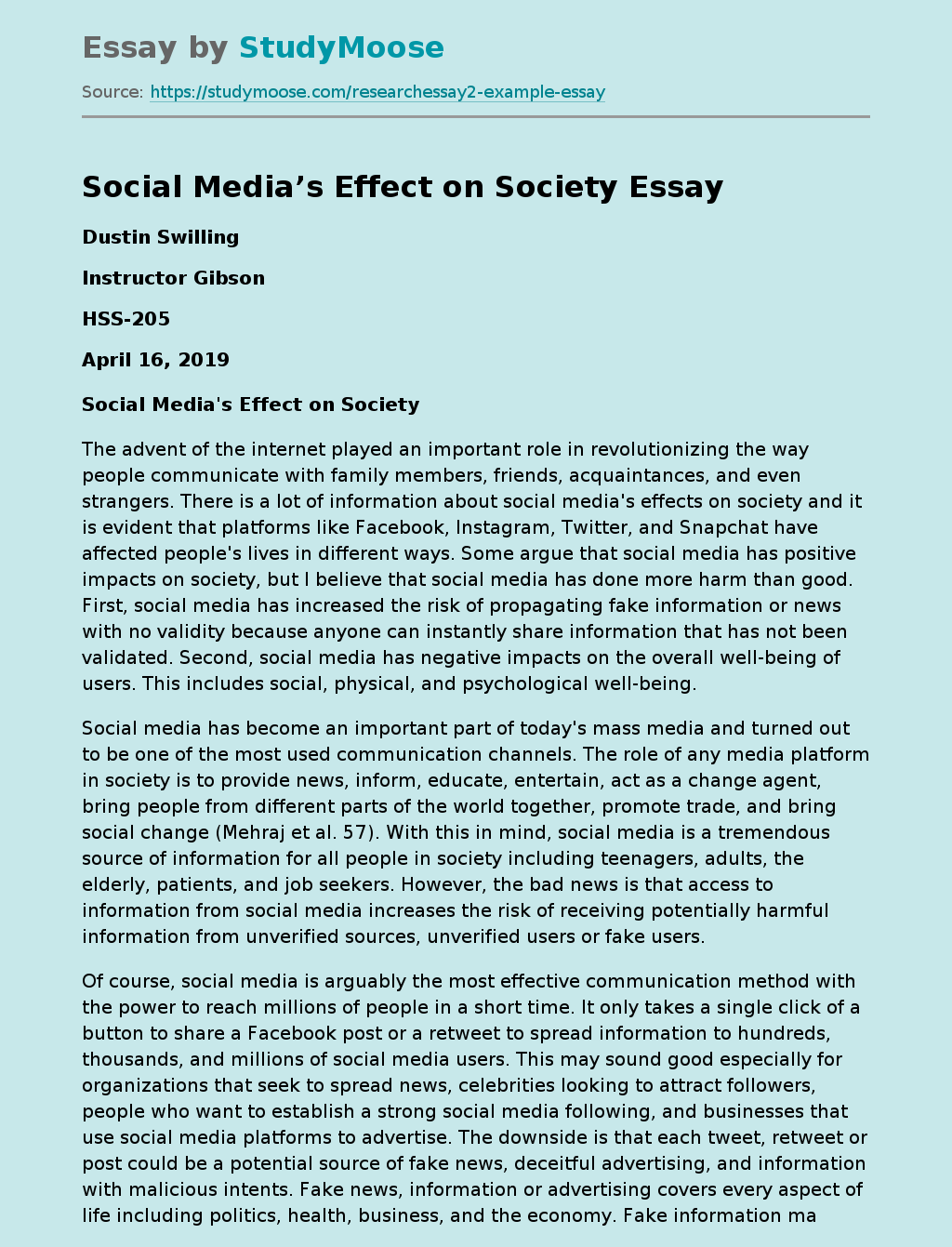