In the last two years at high school, I have witnessed three major bullying confrontations. Last term I also saw a primary school bullying incident in which the teacher did not seem to acknowledge what was going on. These events were the incentive to choose my research topic of bullying in schools. I decided to investigate what forms bullying takes in schools, whom it affects, and attitudes to the problem.

On the ‘No Bully’ and other linked websites, I found that bullying is an international problem that can take many forms.

Don't use plagiarized sources. Get your custom essay on
“ Research Report: Bullying in Schools ”
Get custom paper
NEW! smart matching with writer

I was also interested to discover from the ‘No Bully’ website that boys and girls bully in different ways. Boys tend to use more direct and physical contact, but girls use more subtle strategies like spreading rumors and isolating the target socially. I think the old saying “sticks and stones may break my bones, but names will never hurt me” is not accurate. My research suggests that it is often the names and the insults which stay much longer and do more long term damage than other forms of bullying.

Who is affected by bullying?

Bullying affects many people. Statistics from the ‘Bullying’ documentary indicate that 20% of young victims suffer into adulthood. Some had even dropped out of school later on as a result. The documentary referred to research based on 2000 New Zealand children. 20% of the Year 9 students surveyed had been kicked or punched at some stage in their first year at school and 3% were made to give up money.

60% of students surveyed had suffered verbal abuse which I think is just as bad if not worse than the physical abuse. Bullying affects a large proportion of the school population in some way.

My interview with Stephanie, a woman in her early forties, supports the view that the impact of bullying can be far-reaching as well as widespread. At high school, Stephanie experienced emotional rather than physical abuse with comments about her weight and appearance making her feel like an outcast and also making her school life a misery. She also talked about a time when she and her friend were catching the bus to school and some girls from school started to beat up her friend. She and her friend were much younger than the girls who attacked them. Stephanie felt like she couldn’t do anything to help her friend because she was scared she would be attacked too. For me, the most horrifying part was that Stephanie said that the bus driver, even though he was watching in the mirror, never said a word or took any action in the girls’ defense. Even though the girls reported the incident at school, no action was taken. 25 years after the bullying had occurred, Stephanie was still affected by those events showing that the effects of bullying can be long-term.

It seems to me from my research that bullying is often downplayed or ignored. This was certainly Stephanie’s experience 25 years ago. The statistics quoted in the ‘Bullying’ documentary would also support this, because the problem is not an isolated one. Schools do not seem to be doing enough to address the problem. Stephanie is a good example of how long schools have let this problem continue. As for me, I am glad to have never been the victim, but I am proud to say I’ve never been a bully either. School days are supposed to be the happiest days of our lives, but bullied students are the most miserable. Even though the problem of bullying in schools is now much more in the open, we still have a long way to go to stop it. 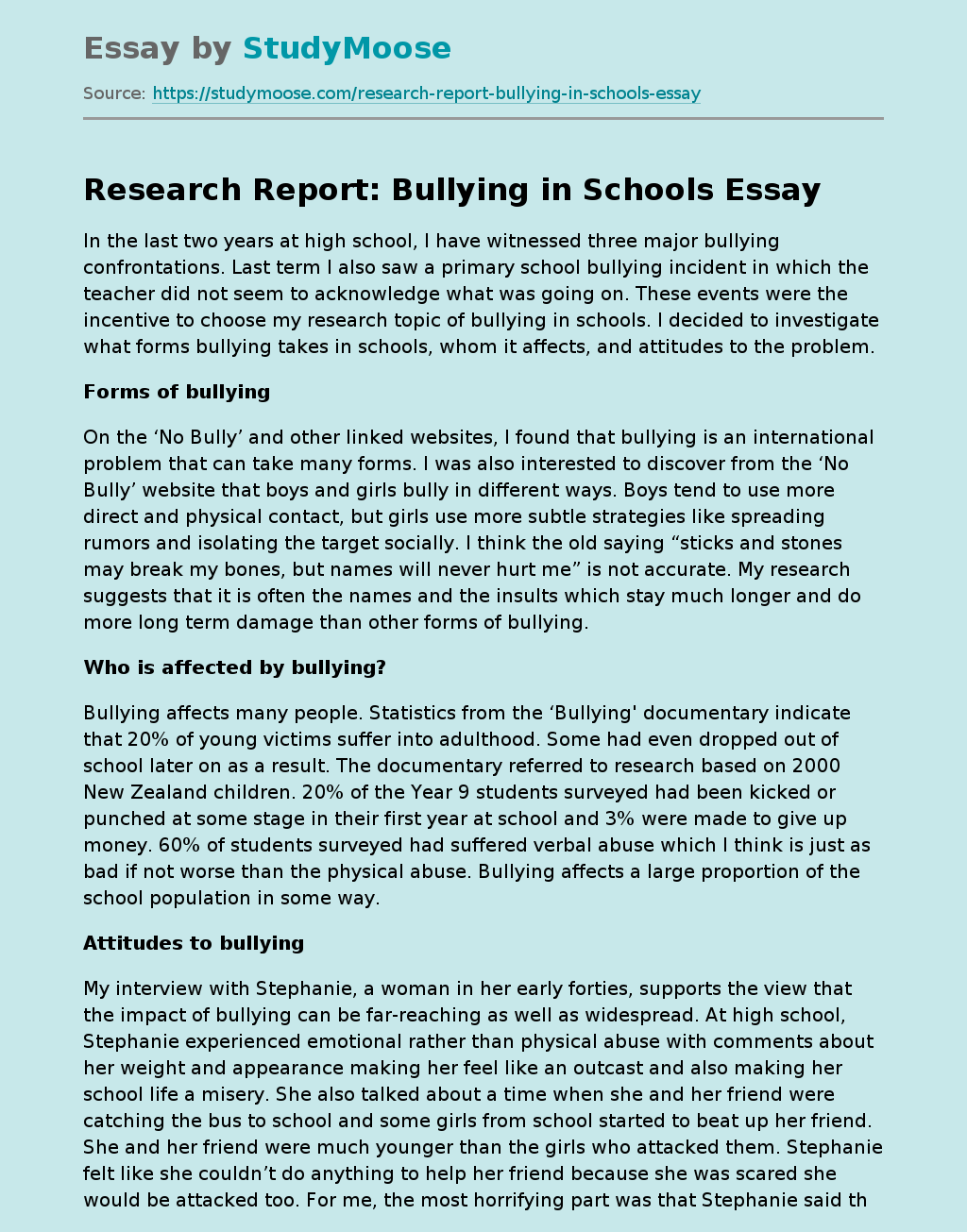