Fashion, is something that all girls want to talk about. Some people may think that the famous designers just magically came up with an idea to make a whole collection on their own. Well, in some cases that is true but in most cases it’s not. A lot of our clothes that we wear now are actually influenced by the clothes from the 15th/16th century. That’s why the clothes from the 16th century and the clothes now are very similar in some ways through the way women wore then and the way they dress now, the way men dressed and the way men dress now and how the children dressed then and now.

Don't use plagiarized sources. Get your custom essay on
“ Research Paper on Clothes ”
Get custom paper
NEW! smart matching with writer

The women from the 16th century and the women now aren’t so different. Both women then and now spent so much money trying to get the latest trends. It was/is so expensive to try to get the newest clothes. About 18% of women’s salaries go towards clothes (ABA Journals.

She is wearing the most wonderful headpiece. (Realmofvenus. renaissanceitaly. net/wardrobe) It must of cost a lot of money to put this creation together. It’s the same with today, the more money you have the more clothes you have.

Those clothes that you have are top of the line, made by the most renowned fashion designers on this planet. Now of days, women can really wear whatever they want. They don’t have to wear what everyone else is wearing, which back then was dresses, dresses and dresses. Clothing now reflects personality and creativity.

It gives people some freedom, freedom that women back then didn’t really have. The men then and the men now have a lot of things in common. They both got all dressed up for special occasions. Men now usually just wear a suit but back then the men went all out! The most famous suit designers are Michael Kor’s and Calvin Klein (nymsuits. com) Puffing and slashing was the thing that was “in. ” The men puffed and slashed everything from breeches to bodices to capes. Bodices were a tight-fitting Elizabethan arment covering the torso; plural because the body came in two parts which fastened in the middle (Dictionary. com)

Both the men then and now also wear drawers or underwear. So that’s something else that the men then and now have in common. Basically, the kids in the 16th century had to wear what the adults wore. The boys wore what the men wore and the girls wore what the women wore. Well, the sizes were smaller. The babies on the other hand usually just wore onsies. What I mean by onsies is that they wore one piece of clothing that covered their entire body.

Minus the head, neck and hands. Today, like adults, kids can really where what they want to. But, they do have some limits. In some private schools, kids are ordered to wear uniforms. Like the one below. (windstan. com) This is something that a girl must wear to school. When there is no dress code in your school kids can really wear whatever they want. In conclusion, the clothes now and the clothes back then aren’t really different cause the clothes then and now have similar designs and inspiraions. 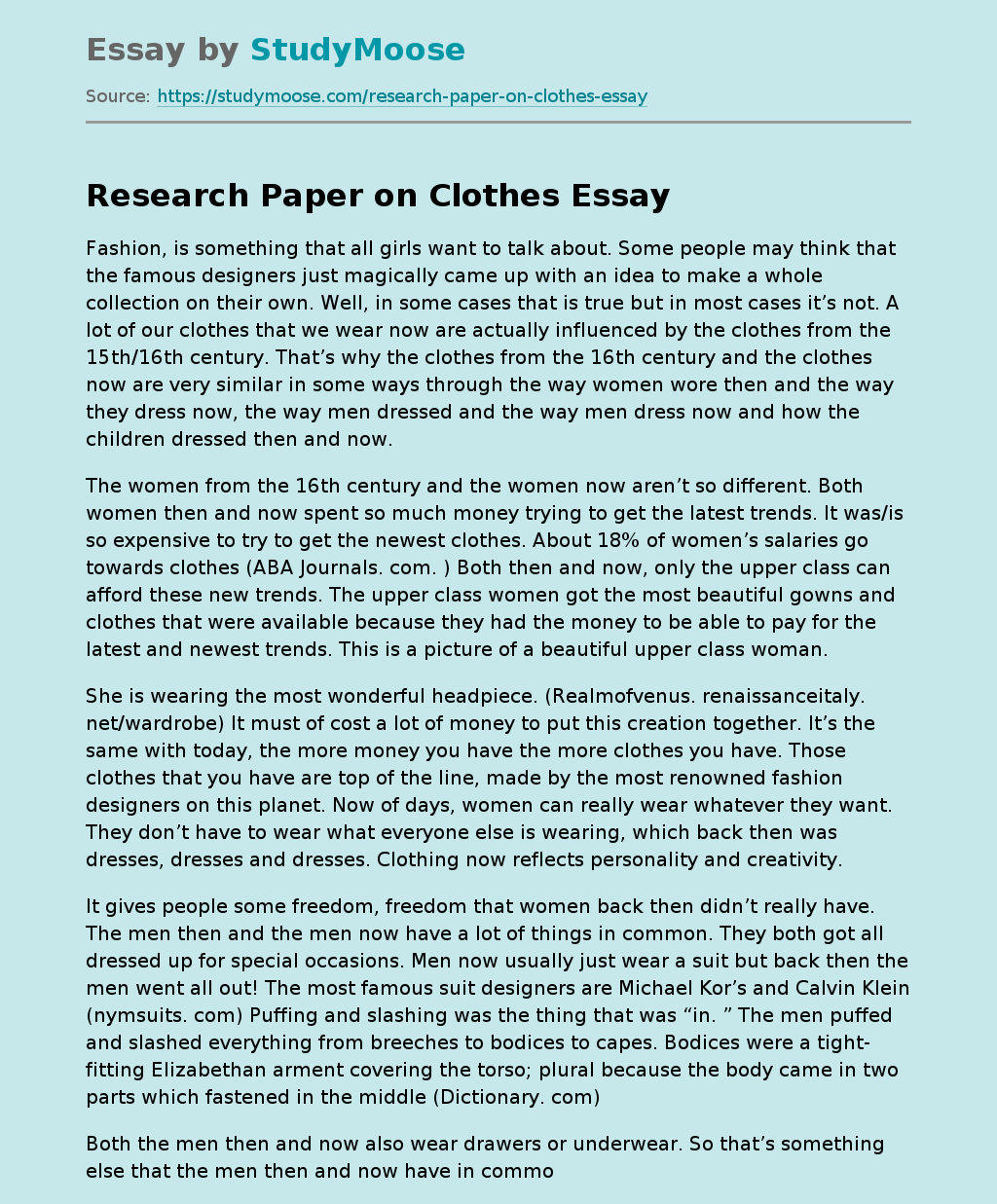