Some research findings on Mid Day Meal Scheme conducted by independent agencies reported that MDM programme is a visible programme and has helped in increase in attendance and enrolment of children particularly girls. They also reported that there is an increase in retention, learning ability and achievement as well as greater social equity among caste, creed, sex and gender groups in the schools. The main research findings are as under:

Research findings (2010) of Pratichi trust of Prof. Amartya Kumar Sen: Unlike many other Government programmes, implementation of MDM has been a success throughout the country.

Turn in your highest-quality paper
Get a qualified writer to help you with
“ Research Findings on Mid Day Meal ”
Get high-quality paper
NEW! AI matching with writer

Though the quality of food needs to be improved, it must be said that with active participation of the beneficiaries, it has become a community programme. The quick response of the state administration in amending the shortcomings indicates that the administration is gradually becoming aware of this.

The major findings of the PROBE (Public Report on Basic Education) Report indicated that 84% of households reported that the children get cooked mid day meal in schools and children enjoy varied menu.

Good practices like washing hands before eating, & after eating are imparted in the schools. Incentives like MDM have contributed to improving enrolment rates.

The Scheme has played a crucial role in reducing drop out, especially among girls. Parents viewed that the mid day meal had reduced the burden of providing one time meal to their children and considered it as a great support to their families. Teachers opined that mid day meal aided in active learning of children, which indirectly improved their academic performance. The Scheme has played a significant role in bringing social equity among all the sections of the society.

Annual Status of Education Report (ASER) 2010 reported that in 83.4% schools served MDM on a day of visit and almost same percent of schools (81.3%) schools were having kitchen sheds for cooking mid day meal. A vastly improved availability of mid day meals had contributed to the increase in enrollment.

Supreme Court Commissioners undertake extensive review of various welfare schemes through field visits. They have observed that the MDM is widely acknowledged as one of the most successful schemes of GOI. Increase in enrollment and attendance of children in primary schools has been noticed after the introduction of MDM.

Performance audit (2011) conducted by Centre for Environment and Food

Security on food security schemes in Orissa and Uttar Pradesh; The sample survey in 130 villages spread over 12 districts of Orissa and Uttar Pradesh (Bundelkhand) was carried out and reported that performance of the MDM scheme is far better in Orissa in comparison with the Uttar Pradesh. An overwhelming 86.7 per cent of Orissa’s children were getting second best category of MDM (regular but inadequate and unsatisfactory meal), only 51.8 per cent of children in UP were getting regular but inadequate and unsatisfactory meal in their schools.

The Cooked Mid Day Meal Program has been successful in addressing classroom hunger in sample schools.

Cooked Mid Day Meal is reported to have created a platform for children of all social and economic backgrounds to take meals together, thereby facilitating achieving the objective of social equity.

It has also been observed that the programme has resulted in the diversion of the attention of teachers and students on activities related to it, rather than towards teaching and learning activities, which results in loss of studies.

In general, visible shortage of basic infrastructural facilities and manpower (that are crucial for the success of the Cooked Mid Day Meal programme) were noted.

Most of the states, it was observed, did not follow the guidelines of Government of India to deliver foodgrains at the school point by PDS dealer, thereby resulting in the leakage of foodgrains. There have been instances where due to long supply chain, foodgrains supplied got adulterated and pilfered.

While Cooked Mid-Day Meal Scheme seems to have contributed to an increase in the attendance in schools across the country, it does not seem to have any significant impact on fresh enrolments in sample schools.

Review of the Scheme by Supreme Court Commissioners

Supreme Court Commissioners are monitoring all welfare Schemes of the Central Government including Mid Day Meal Scheme. They have monitored seven States viz. Assam, Bihar, Jharkhand, Madhya Pradesh, Nagaland, Orissa and West Bengal during 2010-11. The main recommendations of the reports are as under:

Delay in release of funds to school / implementing agencies.

The mid day meal should be expected to cover all children in the school going age irrespective of whether they are enrolled in school. The location of meal served can continue to be the school; this might further encourage those out of school to join schools.

The provision for cooking costs under the mid day meal should be increased based on Price Index developed for Mid Day Meal Scheme to counter the effect of inflation.

Mobilization for kitchen garden in school premises should be encouraged.

Mid day meal should be linked with nutrition education and related educational activities. State Government should be encouraged to adept their text books for this purpose, as the NCERT has already done for some text books.

Nutritious items such as eggs and green vegetables should be provided regularly.

Serious action should be taken in the event of any form of social discrimination in mid day meal such as discrimination against dalit children or dalit cooks.

Community participation in the monitoring of Mid day meal should be strengthened, particularly to prevent corruption and ensure quality.

Grievance redressal mechanism must be within easily reachable distance of complainant and should therefore be decentralized to Panchayat level. It could also consist of mobile camps that reach out to each village. *********

Research Findings on Mid Day Meal. (2016, May 12). Retrieved from https://studymoose.com/research-findings-on-mid-day-meal-essay 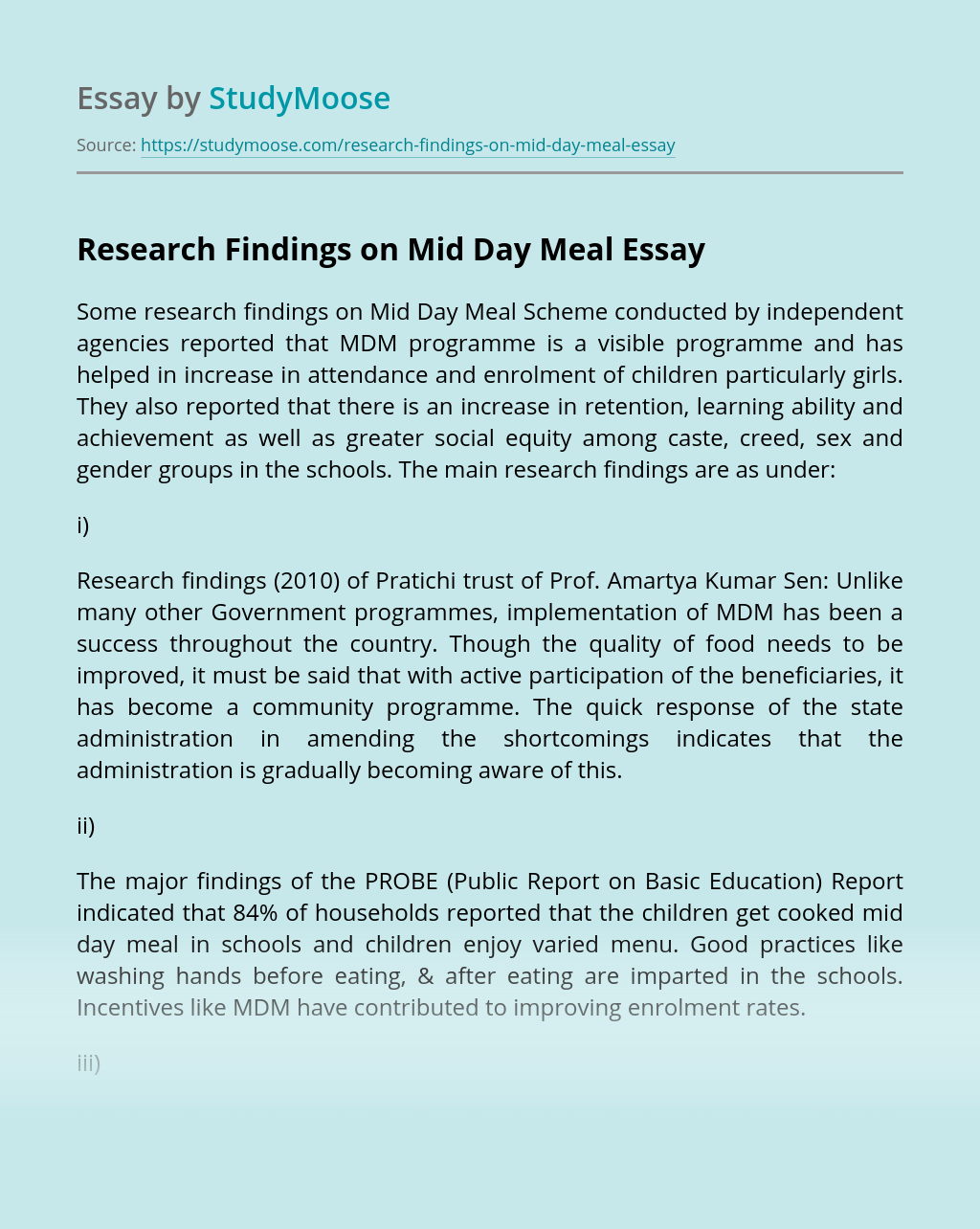 Turn in your highest-quality paper
Get a qualified writer to help you with
“ Research Findings on Mid Day Meal ”
Get high-quality paper
Helping students since 2015
Stay Safe, Stay Original