Crazy Eddie Electronics Stores a chattered company, traded under the symbol CRXY on the New York Stock Exchange. The company was under management of Eddie Antar family from 1971 until 1987 when Oppenheimer-Palmieri Fund (OPF) took over the company as a result of proxy bid (Sanburn, 2012). After a very short time; however, Oppenheimer-Palmieri Fund management decided to suspend the entire board of directors under the governance of the Eddie Antar family to allow room for investigation of a possible fraudulent paradigm in the company (Silverstone, 2005).

Don't use plagiarized sources. Get your custom essay on
“ Report on Financial Statement Fraud Scheme ”
Get custom paper
NEW! smart matching with writer

OPF employed the Apollo Fraud Investigation (API) to investigate on the CRXY electronic stores internal control procedures functionality to prevent the occurrences of frauds and errors in the company’s statements. They were also aided by safeguarding the company’s investors in view of the Eddie Antar and family poor management controls (Albrecht, 2011).

Soon after their preliminary investigations, Apollo Fraud Investigation consulted with Elias Zinn and Victor Palmieri of OPF, thus reaching a concession on the preceding of the CRZY management that eventually revealed fraud schemes.

Among others the Oppenheimer-Palmieri Fund were informed that the Eddie’s Electronics had a substantial decrease in stock value. This, according to the investigating team was provoked by the Eddy Antar family manipulation of the financial statements to meet the stock exchange requirement, and to deceive the public on the company’s financial condition (Albrecht, 2011). In addition, supplier’s credit terms with CRXY were not adhered to, and this made creditors to freeze the company credit viability. This environment served as the detective measure to facilitate well established control procedures on the business operations, and to safeguard the interest of the company.

According to “That Way Lies Madness” by Wells (2011) Eddie Antar had a history of fraud that included “smuggling money from foreign banks as sales, made false entries to accounts payable, overstated Crazy Eddie, Inc.’s inventory by breaking into and altering audit records, took credit for merchandise as ‘returned’ while also counting it as inventory, ‘shared’ inventory from one store to boost other stores’ audit counts, arranged for vendors to ship merchandise and defer the billing, besides claiming discounts and advertising credits, and sold large lots of merchandise to wholesalers, then spread the money to individual stores as retail receipts” (p. 296). The SEC, FBI, the Postal Inspection Service and the U.S. Attorney took down the stereos and televisions distributor, but it was not an easy process.

The Antars came up with many ways to fraud the system and make Crazy Eddie appear profitable while concealing the truth from the auditors. Eddie Antar had the manufacturers scared to go against him because he was the “biggest and baddest retail outlet,” this allowed Eddie to take advantage of the system as well as receiving additional discounts and rebates provided by suppliers (Wells, 2011, p. 296). After all of the deceiving and manipulating, Eddie Antar was discovered in Switzerland as “David Cohen” trying to retrieve $32 million from his bank account that had been frozen at the request of the U. S. Department of Justice. He pleaded guilty after capture and was ordered to pay $121 million in damages. Various family members were also ordered to pay damages, and in 2004 Crazy Eddie was closed evermore (Wells, 2011). Contributing Factors

The examination was aided by a family rivalry in the Antar family. Sam Antar was so upset by the actions of his son Eddie Antar, who divorced his first wife and married someone outside the Jewish race; he reported fraud in Crazy Eddie. Fraud was easy enough to find in every area once examiners began looking; however, past auditors had been kept busy with female company to prevent them from completing the audit as planned. The testimony of Sam Antar was crucial to the fraud examination because it provided places to start looking that contained both legitimate and fraudulent transactions so that a small sample may not reveal much fraud (Antar, 2011).

Past auditors were too trusting of Crazy Eddie and kept working papers in a lockbox on site that was easy to open allowing management at Crazy Eddie to learn the best places to hide fraud. Past auditors also allowed Crazy Eddie employees to count inventory and recorded their inflated count numbers. Inflated inventory was easy to identify once audit work was performed without assistance from Crazy Eddie employees. Fictitious sales were mixed with actual sales in amounts that should have been easy to spot because fictitious sales were deposited in even $100,000 increments to bank accounts of various Crazy Eddie Stores. Past auditors believed no company would bother to deposit money that was not from a sale, so they never discovered that there were no sales receipts to back up these deposits (Antar, 2011). Limitations

For an audit to be effective and efficient, the evidence collected must be concrete and connect with the story portrayed on the financial statements. However, as in the case of Crazy Eddie, the story presented in the financial statements may not reveal a correct depiction of the company. Much like the way Barry Minkow conned investors and auditors in the 1980s (Mulford, & Comiskey, 2002), Crazy Eddie’s story of financial statement fraud was one of clever deception. Unsuspecting auditors with limited skills and training were overmatched when trying to examine the books of Crazy Eddie, and believed the reasons provided by Crazy Eddie personnel for unusual transactions (Wells, 2011). When examining and auditing a company’s inventory, the auditor usually follows a process in which inventory is presented to the auditor in good faith by the company. When inventory is manipulated to fit the description in the financial statements, there is very little an auditor can do to detect the fraud through financial analysis. Eddie Antar’s overnight transferring of inventory from store to store left the auditors with very little chance of detecting any fraud upon examination. Furthermore, mixing in fictional discounts along with real discounts in orders created further misdirection for the auditors to chase. Simply put, examinations have its limitations if the company will do anything to commit and conceal fraud (Wells, 2011). Conclusions

Companies or individuals who engage in activities that result in committing fraudulent acts tend forget the nature and threats that they imposed on not only themselves but also the all the stakeholders who have interest in the company. According to Akron (2004), most fraudulent statement acts or fraud actions are a result of asset misappropriations within the accounts receivable and the accounts payable departments. Based on the facts presented within this case, it is concluded that Eddie Antar, the owner of Sight and Sound committed various fraudulent statement activities, which involved not himself, but his family, and the company stakeholders. As a result of these findings, it is recommended that the activities that Eddie Antar engaged in could have been prevented if company had practice strong ethical behavior along with good solid integrity and values in addition to practicing and adhering to rules and policies put forth by International Accounting Standards Board (IASB) and following the General Acceptance Accounting Principles, and creating a strong internal control system to involve not only the management and family members but also the company vendors and stakeholders.

Report on Financial Statement Fraud Scheme. (2016, May 17). Retrieved from https://studymoose.com/report-on-financial-statement-fraud-scheme-essay 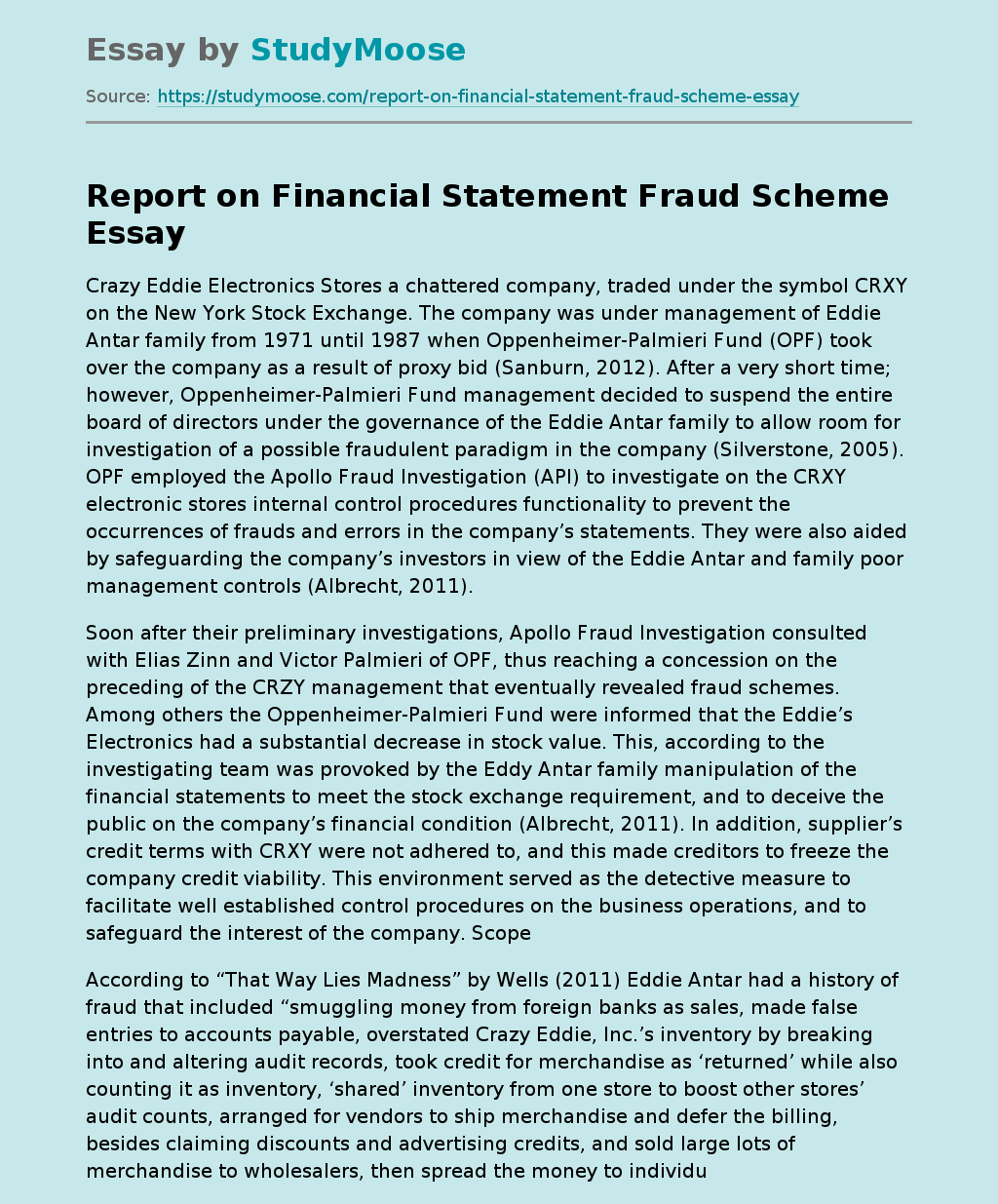